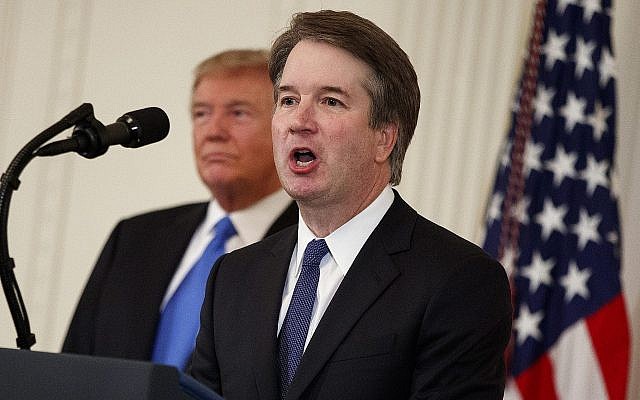 Supreme Court Justice-to-be Brett Kavanaugh is quoted as having advised Senator Collins of Maine that the Court’s constitutional ruling in Roe v. Wade is “well-settled” and that he would not “lightly overturn what is well-settled and long-established law.” Another constitutional precedent of great importance to the American Jewish community is, however, entitled to much less respect than Roe v. Wade, even though it was written by Justice Antonin Scalia, ordinarily a hero to Kavanaugh and conservative jurists.

A devastating constitutional Supreme Court decision that impedes religious observance was issued by Scalia in 1990 and it was enforced several years later by Justice Anthony Kennedy. Will the Court that includes Kavanaugh and Justice Neil Gorsuch, who will have replaced Scalia and Kennedy but are known to be outspoken supporters of religious liberty, treat that decision as “well-settled?”

With literally no advance warning whatever, Justice Scalia and four of his colleagues (Rehnquist, White, Stevens, and Kennedy) issued a constitutional ruling in April 1990 that eradicated prior decisions that had protected individual religious liberty. The parties in the case – Employment Division v. Smith – assumed that at least three earlier Supreme Court rulings had firmly established the First Amendment constitutional right of an individual to engage in religious observance such as refraining from labor on the Sabbath, unless government could demonstrate a “compelling interest” in prohibiting or regulating the religious practice.

The leading precedent was a 1963 decision titled Sherbert v. Verner, written by Justice William J. Brennan. The Supreme Court held that a Seventh-Day Adventist observing Saturday as her Sabbath could not be denied unemployment compensation because of the First Amendment’s Free Exercise Clause. When the Smith case was argued in the Supreme Court in 1989, the parties and those submitting friend-of- the-court briefs believed the Court was considering only whether the constitutional Sherbert rule protected even the ingestion of peyote – a religious observance that violated local criminal law.

The Supreme Court’s constitutional ruling went far beyond the contention made in the briefs and oral argument of those who opposed the accommodation to religion contested in the Smith case. Justice Scalia wrote the Supreme Court’s majority opinion rejecting the position of the religious observers, and he did not limit the holding to criminal conduct. His opinion declared that “religiously motivated action” – whether punishable as a crime or simply burdened by civil regulation — was not constitutionally exempted from a “neutral, generally applicable law.”

I participated in a public discussion with Justice Scalia at Yeshiva University several years ago and asked him whether his ruling meant that if San Francisco voted in a referendum to prohibit circumcision (as then appeared possible), Jews could be prohibited from celebrating a Brit Milah in San Francisco. To gasps from the audience, he replied affirmatively.

The Supreme Court meets in a weekly private conference attended by no one other than the nine Justices to express tentative views on cases that the Court has heard that week. Justice Blackmun took cryptic notes at these conferences, and they are now, at the instruction in his will, in the archives of the Library of Congress. Blackmun’s handwritten notes of the Court’s conference of November 9, 1989, do not foreshadow the sweeping decision that five Justices, speaking through Justice Scalia, issued on June 4, 1990.

The Blackmun files contain a memorandum written by one of Blackmun’s law clerks when Scalia’s surprisingly broad opinion was circulated to the other Justices. She expressed surprise at the breadth of Scalia’s draft in a memorandum dated January 3, 1990, in which she said, “I find the draft quite extreme. It casts doubt on the continuing validity of the Sherbert line of cases, and seems at times to suggest that a state need not have a compelling interest to justify refusing to recognize religious exceptions to laws of general application.” She added: “The breadth of the opinion, and its cavalier attitude toward settled precedent, make me wonder how many of the justices who voted in the majority will be willing to join it.”

To the law clerk’s surprise, Justice Scalia garnered five votes to support a novel constitutional principle that neither party nor any brief filed with the Court had addressed. Four Justices (Brennan, Marshall, Blackmun, and O’Connor) dissented sharply from Scalia’s rejection of the meaning that had theretofore been given to the First Amendment’s Free Exercise Clause. The second sentence of the opinion issued by O’Connor on behalf of the four says, “In my view, today’s holding dramatically departs from well-settled First Amendment jurisprudence, appears unnecessary to resolve the question presented, and is incompatible with our Nation’s fundamental commitment to individual religious liberty.”

In private discussion and in a public event I asked Justice Scalia – himself a very observant and committed Catholic – how he could reconcile the Smith opinion with his vote, while on the federal court of appeals, supporting the constitutional right of an Air Force psychologist (who was my client) to wear a yarmulke. He replied candidly that while a federal appellate judge he was bound by the Sherbert v. Verner precedent but when on the Supreme Court he had greater freedom.

Scalia’s opinion in Smith was so stunning that a rainbow coalition of organizations joined in requesting rehearing. They observed that the Court had not heard from parties or friends-of-the-court on the constitutional issue that was resolved in Scalia’s opinion. The Supreme Court denied the request for rehearing.

Congress was also astounded at the decision. Almost unanimously, it passed a law called the Religious Freedom Restoration Act (“RFRA”) that explicitly restored the Sherbert v. Verner standard as a matter of federal law, even if five Justices had effectively overruled that case’s constitutional foundation.

Justice Kennedy issued an opinion in 1997 declaring that RFRA could not constitutionally affect burdens on religious observances imposed by states and local governments. (To his credit, President Bill Clinton announced soon after that decision that the federal government would continue to be bound by RFRA.)

Justice O’Connor, joined by Justice Breyer (who had not yet been a Supreme Court Justice in 1990), dissented in 1997 and uncharacteristically refused to accept the Smith decision as binding precedent. She explained “that Smith adopted an improper standard for deciding free exercise claims” and noted that Scalia’s reasoning was announced “without briefing or argument on the issue.” She then canvassed the original understanding of the First Amendment’s Free Exercise Clause and demonstrated persuasively (although Justice Scalia disagreed) that a true “originalist” would not have reached the result of Scalia’s 1990 opinion. Justice Souter (who was also not a Justice in 1990) said in a dissent that he had “serious doubts about the precedential value of the Smith rule and its entitlement to adherence.”

Attorney General Jeff Sessions and his Department of Justice have recently embarked on a publicized campaign to litigate on behalf of religious minority rights, and they should seek to have the Smith decision overruled by the current Supreme Court. By joining the O’Connor opinion in 1997, Justice Breyer expressed his disagreement with Smith. The Court’s Obama appointees, Justices Sotomayor and Kagan, as well as Justice Ginsburg, should endorse the views of Justices Brennan, Marshall, Blackmun, O’Connor, and Souter and vote to overrule the inadequately advised constitutional rule of Employment Division v. Smith. Recent opinions by Chief Justice Roberts, as well as expressed views of Justices Thomas and Alito, have supported accommodation for religious observance. Notwithstanding their (and my) admiration for Justice Scalia, Justices Gorsuch and Kavanaugh should join in what could be an unusual unanimous overruling of a constitutional decision.

Justice Scalia would confess to friends that he occasionally nodded. The last time we had lunch he even voiced some misgiving over the effects of Smith.

Nathan Lewin is a Washington lawyer who was a law-school classmate and friend of Justice Scalia. He has argued 28 cases in the Supreme Court of the United States, including several religious-liberty cases. He teaches a seminar in Supreme Court litigation at Columbia Law School.