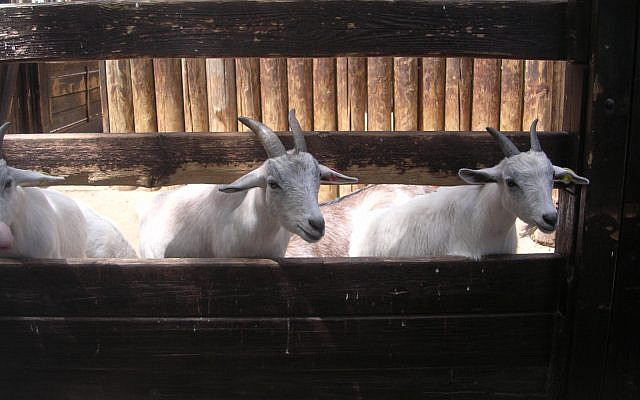 After Adam and Chava were created (Breisheet 1:28-30) they were told:

God blessed them and God said to them, “Be fertile and increase, fill the earth and master it; and rule the fish of the sea, the birds of the sky, and all the living things that creep on earth.” God said, “See, I give you every seed-bearing plant that is upon all the earth, and every tree that has seed-bearing fruit; they shall be yours for food. And to all the animals on land, to all the birds of the sky, and to everything that creeps on earth, in which there is the breath of life, I give all the green plants for food.” And it was so.

At the time of the creation of the world, everyone was a vegetarian.

After the flood, we see a similar commandment to Noach (Breisheet 9:1-4) and his family with a slight change due to the desire for meat. The hierarchy that people are above the animals is reinforced.

God blessed Noah and his sons, and said to them, “Be fertile and increase, and fill the earth.  The fear and the dread of you shall be upon all the beasts of the earth and upon all the birds of the sky—everything with which the earth is astir—and upon all the fish of the sea; they are given into your hand.  Every creature that lives shall be yours to eat; as with the green grasses, I give you all these. You must not, however, eat flesh with its life-blood in it.

Although meat was permitted after the flood, there was a restriction of not eating “Ever Min HaChai”, flesh with its life-blood in it, meaning a limb cut from a living animal.

Rambam, who tries to find the reasons behind the mitzvot explains in Moreh Nevuchim (Guide of the Perplexed) Part 3, 48:7:

We see that the Rambam points out that we should not be cruel to animals but he also mentions the issue of staying away from practices that look like Avoda Zara, idol worship.

At Mount Sinai, B’nai Yisrael received the Torah including the laws of kashrut-keeping kosher- further limiting the permission to eat meat which was given to Noach. There was now a listing of which animals we are permitted to eat and how they must be slaughtered.

The commandment concerning the killing of animals is necessary, because the natural food of man consists of vegetables and of the flesh of animals. The best meat is that of animals permitted to be used for food. No doctor has any doubts about this. Since therefore, the desire of procuring good food necessitates the slaying of animals, the Law enjoins that the death of the animal should be the easiest. It is not allowed to torment the animal by cutting the throat in a clumsy manner or by cutting off a limb while the animal is alive.

Some things have changed since the days of the Rambam (1138-1204). There are many vegetarians and vegans today who have found protein alternatives and are able to live healthy lives without meat. There are plenty of doctors today who don’t have any problem with their patients refraining from eating meat. Most health care professionals suggest that meat only be eaten in moderation.

Are the kosher animals the healthiest? I don’t think that has been proven.

The non-Jews who eat pork and the meat of other impure animals, birds and fish, enjoy good health and are not affected adversely by these.

What still holds true from the Rambam’s words is that Shechita (ritually slaughtering the animal) has to be done with the sharpest blade in order to make the process as painless as possible for the animal. As well, ripping a limb off a living animal is unacceptable.

Although the ideal in the Garden of Eden was a vegetarian diet, meat was permitted as part of the Sheva Mitzvot B’nai Noach as long as one didn’t eat the limb torn off of the animal or the blood. Once the Kosher laws were set up, the laws of eating meat were limited to certain animals which had to be killed through Shechita.

Rav Avraham Yitzchak HaKohen Kook (1865-1935), Chief Rabbi of pre-State Israel looked at Zionism as a precursor to the Messianic Age and therefore wrote about it in “Chazon HaTzimchonut v’HaShalom,” A Vision of Vegetarianism and Peace. He also wrote in “Olat Rayah” that the korbanot (sacrifices) in the Third Beit HaMikdash would be vegetarian.

Will we be returning to the diet of the Garden of Eden?

I guess that we will have to wait and see.