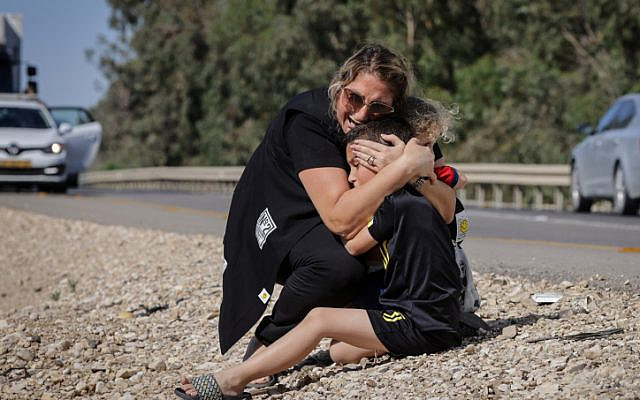 A woman and child take cover as a siren sounds a warning of incoming rockets fired from the Gaza strip in the city of Ashkelon, southern Israel, on May 19, 2021 (Olivier Fitoussi/Flash90)

Last night, I was awoken shortly after midnight by the sound of the siren.

In that twilight between sleep and awake you don’t have time to think. Just react. Get out of bed. Wake up my 11-year-old-daughter. Run…no…slow down…walk down the stairs. Get into the Safe Room. Close the door. Wait.

We didn’t wait long. Not 30 seconds passed before we heard a series of booms. These weren’t Iron Dome booms that we hear all the time, throughout the day as you’re trying to work. They were something deeper. Closer.

I waited a few minutes, and trudged back upstairs and went back to sleep. My wife tells me that I’m blessed that way. When I’m really tired, I can sleep. (Usually, but not always.) She was not so fortunate.

School has been canceled for over a week now.

Children have been home, learning via Zoom. My daughter’s school was supposed to begin at 8:30 a.m., but they decided to start at 10:00 a.m., given that all of the children in the school were awoken in the middle of the night by a rocket hurtling at them through the air. So they’ll learn from home and try and carry on some level of normalcy.

My older daughter, who is doing her national service in the Tel Aviv area, has also been home for a week. Her organization has deemed it too dangerous for her to travel around the Gush Dan area visiting the elderly — Holocaust survivors, veterans, and just regular grandparents who live alone without company and companionship who she sees each week. So she has been trying to make the best of it, calling them to see how they’re doing. They tell her that they just can’t move fast enough to get to the safe room or stairwell when they hear the sirens. After a certain age, the legs just don’t move as fast anymore. When they hear the siren, they try to move away from the windows and hope for the best.

Last night, my wife and I attended a wedding.

When we put the name of the hall into Waze, it told us that we’d have to drive through an Arab neighborhood to get there. There’s that second of doubt now. Is it safe? As I was driving to the hall, I took note of all the bottlenecks; the places where a group or mob could block the road and begin hurling rocks at my car. But we drove. All was quiet.

This morning, I drove to work.

My drive takes me from my home in Yad Binyamin in southern-central Israel to the Gush Etzion area south of Jerusalem. It’s a pastoral drive. A beautiful drive. But you also have to drive through a checkpoint and an Arab village. It was fine and quiet — but the thought and concern are always there, lurking in the background.

My son needs batteries for his hearing aid.

They don’t sell them in our town; you have to drive 15 minutes. Have you been on the road during a rocket attack? Have you left your car and crouched in a ditch far enough away that if a rocket hit the car you wouldn’t be hit by the shrapnel? I have. It’s not fun.

I — by the way — am fine. For reasons my family doesn’t understand, I’ve taken all of this in stride. But I don’t consider myself normal. The normal people have panic attacks. And difficulty focusing and concentrating. And have trouble driving to work.

Which they do anyway.

I tell you all this because some Jews in America have felt the need to tell me about how the situation is “complex.” How there are injustices on all sides. How we need to understand and appreciate the “nuance” in the discussion.

I have come to hate those words. Nuance. Complexity. Codewords that justify violence, terrorism and murder.

I remember a time where other words had more meaning. Solidarity. Identity. Care. Concern. Support.

I do not labor under the illusion that Israel is perfect. Not by a long shot. But if you think that now is the time to share your feelings about nuance and complexity, while terrorists are firing rockets at me and my family (and most probably at your relatives as well), I ask you to look inside yourself and ask what it means to you to be a member of klal Yisrael.

And if you cannot find it within yourself to express your support for Israel while its citizens are under attack, perhaps you can at least remember the wise words of Solomon in Kohelet.

About the Author
Rabbi Reuven Spolter is the founder and director of Kitah (www.kitah.org), a new online Jewish learning plaform bringing Jewish learning to Jewish schools and Jewish homeschooling families around the world. He is also the founder of the Mishnah Project (mishnah.co), an online flipped-classroom learning initiative focusing on using the power of visual learning to bring the Mishnah Yomit program to a global audience. He has served as community rabbi and taught formally and online for over two decades. He has taught and lectured to groups of all ages in communities around the world.
Related Topics
Related Posts
Comments