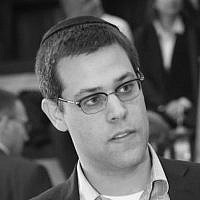 The Blogs
Aaron Katz
Apply for a Blog
Please note that the posts on The Blogs are contributed by third parties. The opinions, facts and any media content in them are presented solely by the authors, and neither The Times of Israel nor its partners assume any responsibility for them. Please contact us in case of abuse. In case of abuse,
Report this post. 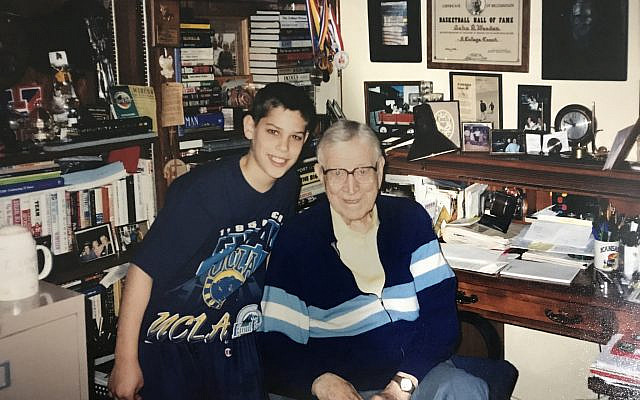 While we’re all busy getting ready for Pesach during this crazy pandemic time, let’s not forget that this Sunday is Selection Sunday- that annual time of the year that heralds the exciting NCAA Division I men’s basketball tournament that starts next week. While admittedly, college basketball has lost some of its luster in recent years, the NCAA tournament (which was cancelled last year due to the pandemic) always comes through and provides excitement even to those who don’t have the slightest clue as to which state perennial contender Gonzaga calls home. On a personal level, the annual tournament always brings back memories to the team of my youth, the UCLA Bruins, and to the legendary educator and coach John Wooden.

Growing up in Los Angeles, I certainly had my fair share of celebrity encounters. Though few encounters match up to the time I somehow had the courage in early February of 1997 to call up John Wooden and ask for an interview. I was a pre- bar mitzvah 7th grader at Maimonides Academy, a modern Orthodox elementary school, and our innovative principal, Dr. Debra Parks, had introduced a schoolwide project called the “Bright Ideas Fair” to the curriculum the year prior. Dr. Parks wanted students to pick any topic that they were passionate about and to pursue it. At the time, I was quite addicted to basketball (which was my first love, prior to my conversion to baseball a few years later) and while the Los Angeles Lakers (well into their first season with Shaq and Kobe) were my main priority, the UCLA men basketball team’s 1995 championship the year prior had brought my focus onto UCLA as well. For my sixth grade project in early 1996, I actually interviewed Jim Harrick, the coach of the championship  team, about the then increasingly common practice of players forgoing college and jumping to the NBA. Dr. Parks herself arranged the interview, which took place at the UCLA athletic center, and I’ll never forget the look on then UCLA star and future NBA player Charles O’Bannon’s face when we passed each other as I walked out of Harrick’s office. My day school uniform of kippah, untucked tzitzis, white polo shirt and navy slacks, certainly was not the usual outfit seen at the athletic center. O’Bannon warmly asked what I was doing in Harrick’s office and graciously took a picture with me and signed various memorabilia.

Once we were assigned the Bright Ideas Fair project during the next year, I immediately set my sights high and decided that I had to meet the Wizard of Westwood himself, John Wooden. At the time, Wooden was the young age of 86 (he would ultimately pass away in 2010 just months before his 100th birthday) and he is arguably the most successful coach of all time in American sports history. During a record twelve year period between 1963 and 1975, Wooden’s UCLA teams won ten championships, including one stretch of seven straight championships. He coached legends such as Lew Alcindor (later Kareem Abdul Jabbar), Bill Walton, and a host of other future NBA stars. Wooden himself was a hall of fame basketball player who had starred for Purdue in the early 1930’s and had played in the nascent basketball professional leagues of that era. Wooden also is known for his Pyramid of Success and the hundreds of quotes of wisdom that have been immortalized through his writings and public lectures. To sports fan and students of management and leadership, Wooden is certainly one of the great modern day “Rebbes”, and his words continue to provide inspiration well past his passing. Not a day goes by that one of his famous aphorisms is not quoted in the popular press, and his many disciples- from former players to coaches who have modeled their style after his- continue to spread the wisdom that emanated from the wizard himself.

At the time of the interview, the NBA was commemorating its 50th anniversary and I wanted to interview Wooden to discuss the difference in basketball over that period. First I had to reach the coach, and my dad luckily knew someone who knew Wooden directly, indeed a very typical Los Angeles scenario where we’re always just a connection or two away from someone else. The contact ran the idea by Wooden and he graciously accepted and suggested that I call him directly to set up a time to meet. And just like that, I was gifted Wooden’s 818 area code phone number and called him up. We decided to meet at his condominium the following week, over President’s Day weekend, and Wooden gave me detailed directions of how to get to his home in Encino from my house in West LA.

On the day of the interview, I thought long and hard of what to wear, and went for my typical Sunday outfit of a Nike hat (this was the years of the Tiger Woods swoosh era), UCLA t-shirt and gym shorts (with the Pacers logo, a double ode to Wooden’s home state and beloved UCLA alum and then Indiana Pacers star Reggie Miller). My sister Eva, a high school senior at the time, drove me out to the valley with her newly minted driver’s license. Despite getting terribly lost on the 101 freeway in the days of pre-cell phone and Waze driving, we somehow arrived at Wooden’s condo in time for the interview. We buzzed his name on the intercom and he warmly came to the gate of the complex to welcome us in. We entered his two bedroom condo which was remarkably pedestrian for someone of Wooden’s stature and we sat down in his office, a historical room which has since literally been reassembled at the UCLA Athletic Hall of Fame. We got to work on the interview, and reading his answers on the notepad that I’ve kept to this day, it is clear that Wooden viewed this interview with the same thoughtfulness as if he had been sitting down with a real reporter. Wooden praised the advancement of women in basketball, lamented the negative influence of the media and money on the pureness of the game, discussed how he does not like to single out any players as being the “greatest” player he coached, and finally noted that his greatest accomplishment in life was finishing college and receiving an award for having a high GPA. His humility and graciousness were palpable and left a lasting image until today.

After the interview, Wooden showed me various memorabilia and historical items that sat on his desk. By ditching my school uniform, Wooden actually must have not realized I was a nice Jewish boy from Pico Robertson, and as a devout Christian he offered me a prayer card that was on his desk. I respectfully declined, though I was too sheepish to offer the real reason why. I recently reached out to a Christian scholar and by zooming in on a picture I took of Wooden’s desk, he thought that it was a picture of Saint Thérèse of Lisieux, a 19th century French Catholic Discalced Carmelite nun, which is distributed at someone’s funeral or at a mass for the sick. Wooden himself was a member of the Christian Church (Disciples of Christ), and was known as a religious man who was highly involved in his church.

We then posed for pictures and Wooden autographed pictures of himself for me and my sister. To this day, my picture of Wooden’s signature sits on the shelf in my home office (next to a Sandy Koufax signed ball, of course) and continues to inspire me to this day. Indeed his definition of success is also printed out in my office and it’s something that I continue to turn to: “Success is peace of mind that is the direct result of self-satisfaction in knowing you did your best to become the best that you are capable of becoming.” While just a fleeting moment during my childhood, the combination of sitting with a true giant, while haven taken the initiative to arrange the meeting on my own, has served as an inspiration for the rest of my life. There are so many great people in our midst, perhaps they are only a phone call or two away? And who better than Wooden to teach us, that many of these people who have obtained success need not be locked up in some ivory tower, but live among us and are willing and eager to share their life stories and values with us- it is just on us to seek them out and glean from their wisdom.

About the Author
Aaron R. Katz is an associate in the corporate and securities practice at Greenberg Traurig. He lives with his wife and four children in Israel.
Related Topics
Related Posts
Comments