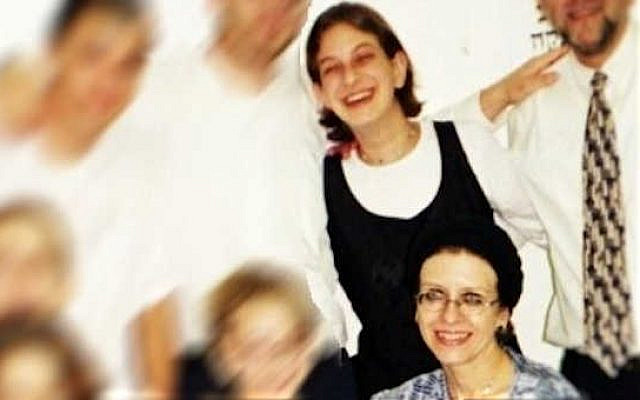 Malki and her mother at a family celebration some weeks before the August 2001 Sbarro massacre (Courtesy: The Roth family)

“Love him or hate him” began a recent New York Times farewell article about US ambassador to Israel, David M. Friedman. And we are left in no doubt which is the NYT’s sentiment.

It’s also abundantly clear that Friedman himself is a huge fan of Friedman. He can’t stop tooting his own horn, to the point where the reader is left cringing.

And the adulation he has won from Jared Kushner, President Trump’s son-in-law, no doubt enhanced that swelled ego:

He set a very ambitious agenda,” said Kushner. “Quite frankly, toward the end we were almost running out of things to accomplish, because David had gotten done so many things that were unthinkable.

In fact, Friedman is so high on the glorified role he has played in the Trump administration that he says he won’t be immigrating to Israel yet:

“I’m going to stay American-only for at least four years,” he said. “I want to give myself every opportunity to return to government.”

Of course, he said that before Trump’s impeachment and expected disqualification from running for the presidency in 2024.

With all those idealistic accomplishments, it is noteworthy that Mr. Friedman was utterly deaf to our many approaches to his office which spanned over two and a half years. These, of course, concerned our efforts to have the US press Jordan to extradite the terrorist charged with bombing the Sbarro pizzeria where our daughter Malki was one of the many victims.

His office staff repeatedly assured us that our emails had been received and would be dealt with. At times, the response was slightly more detailed: “We are looking into the points you raised and will respond to you when I have more information.”

In 30 months of efforts, it never progressed beyond that stage. We never heard from the ambassador; not directly, not indirectly. Silence. 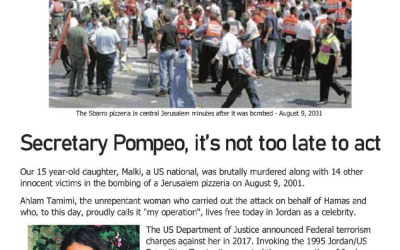 My husband and I placed this ad on the Jerusalem Post’s front page so that Secretary of State Pompeo would see it at breakfast in his Jerusalem hotel on November 19, 2020. We never heard from him or his entourage.

We had hoped that Friedman would conduct himself as an ambassador should. That he would help clarify for us — the parents of a US national murdered in a terror attack — why the State Department which he represented here in Israel these past four years — was so mystifyingly unresponsive to our approaches.

Charges were unveiled against Ahlam Tamimi, a Jordanian bomber, in March 2017. She was added that month to the FBI’s Most Wanted Terrorist list.

That’s also when King Abdullah’s regime came out of the closet as her defender and protector, steadfastly shielding from US justice the accused mass murderer and admitted Hamas terrorist.

The 1995 extradition treaty between the two countries, and which the US insists is valid, has not fazed the king in the least. And luckily for him, little evident pressure is being exerted to elicit his compliance.

Tamimi, the mastermind of the 2001 Sbarro massacre, the Hamas operative who selected the target – a bustling eatery crowded with women and children – and transported the bomb to its door, has emerged as an honored celebrity in her place of refuge, Amman, the capital of Jordan.

Fifteen men, women and children were murdered in that massacre of which Tamimi has boasted repeatedly to her huge fan base.

The US has not permitted any of that to affect its much-touted “partnership against terrorism” with Jordan. Nor its generous funding.

And even Mr. Friedman was unperturbed by that reality. The many emails we sent him, every one of which he ignored, detailed the travesty of justice we are fighting to correct.

To the numerous friends and contacts who over the years have directed us to Friedman for support, confident that he would be an avid ally, I have this to say: Nothing could be further from the truth.

Let’s hope that Mr. Friedman’s replacement will be blessed with a bit more modesty and a lot more morality.