By now we know what happened. A Palestinian terrorist has murdered two people in the central plaza of Tel Aviv, where young Israelis hang out on Thursday night. Why on a Thursday night? Because on Thursday night, just before the weekend, that place is more crowded. Think of Friday night movida in Barcelona or Rome (Catholic Countries, where the day of rest is Sunday and the time for family is Saturday afternoon). That’s Mediterranean civilisation for you, in its Jewish declination.

The terrorist murdered people on Thursday night because he wanted to kill  Jews. Those who want to kill Jews are called antisemitic.  This was an act of antisemitic terrorism.

Hamas and Jihad are celebrating the murder. Nothing new, here.

But let’s look at some reactions on the Left. Na’amod first. The UK organisation, with no registered memberships, claims to represent a large part of young British Jews (those who are not interested in hanging out on Thursday night in Tel Aviv). 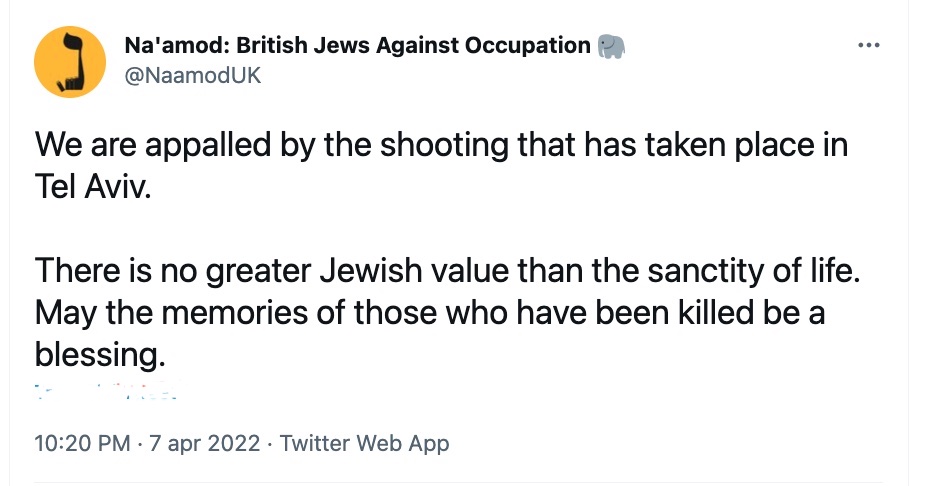 Thank you for letting us know that you are “appalled”. But some words are missing: terrorism, Palestinian, antisemite. In fact, if one relied only on the information you have selected, one may think that the “shooting” has taken place after an argument at the traffic light. You know, those impulsive Mediterranean folk, who cannot control their instincts and are always revengeful as gangsters…

Notably, any reference to justice is missing. But justice is a supreme Jewish value.  Don’t the victims of the “shooting” deserve justice? If you have received a Jewish education I have something to ask your teachers. Or perhaps you skipped Cheder too many times?

On to another organisation, Yachad. Its membership is equally ectoplasmic. They claim to be many, we cannot check that bold assertion. They like to add odd signatures to their petition without asking the signatories. Oh, the things one must do to represent the youth… Anyway, that practice should sound as a warning not to take their numerical claims as accurate.

At least, the word terror is there. But Palestinian and antisemites are missing. We also have no clue regarding the motivations of the attack. The victims, you see, are “young people”, not Jews. God forbid we think there is something antisemitic in wanting to kill Jews on Thursday night. If we made such a claim we may stop representing the majority of young British Jews (including those whose signatures we included – without asking).

At least at Yachad they seem to be aware that out there there are those who, perversely, think that “killing young [Jewish, Yachad, the word is: Jewish] people is somehow justifiable”. Big deal. Just go on social media in the aftermath of the attack and you find plenty of keyboard warriors (of all faiths, Christianity and Islam included) who believe that such barbarism is justifiable.

One wonders if this tweet will help these antisemitic perverse keyboard warriors to change their minds. It’s another matter we cannot check, unfortunately.

Neither Na’amod nor Yachad seem interested to know the reasons for such a horrific terror attack (sorry, “shooting”). Why there are in the Middle East people who believe it is justifiable to murder young Jews? Actually, there are even people who celebrate the murderer.  This seems to be a question that these two organisations do not dare to ask.

This is the point of the script when some of my readers like to throw in words such as  “Occupation” “apartheid” and the like. As if the (Jewish) Israeli voters, who have voted for the current Government, were to blame for these antisemitic murders. Please give me a break. There is a name for those who blame Jews for antisemitism.

Anyway,  Pavlovian reactions aside (one day we’ll have to investigate why the Jewish settler has replaced the Jewish financiers in the fantasies of the Far Left) I dare to suggest that the education that the Palestinian youth receive has something to do with the decision that some Palestinian takes to engage in antisemitic murders.

Look at the textbooks in use in Palestinian schools. You’ll find incitement to violence, denial of Jewish collective rights, and glorification of terrorists. There are complaints even from European Union, an institution not known for being Israeli-friendly.

Maybe that kind of curriculum has something to do with a terrorist’s decision to murder Jews (or “to shoot young people”) on a Thursday night in Tel Aviv.? And perhaps is it related to the celebrations that take place every time Jews are murdered?