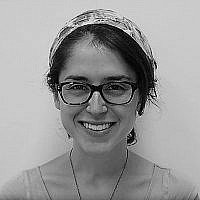 The Blogs
Tamar Friedman Wilson
Apply for a Blog
Please note that the posts on The Blogs are contributed by third parties. The opinions, facts and any media content in them are presented solely by the authors, and neither The Times of Israel nor its partners assume any responsibility for them. Please contact us in case of abuse. In case of abuse,
Report this post.

You’ve survived August — glad your kids are back in school?

We’ve just passed that time of year again, where parents are scrambling to find childcare coverage until the new school year begins: what trends in Israel contribute to a situation where it’s really hard to find a work/parent balance — even once the school year has started?

Those who are working parents, particularly to young children, know that August is an extremely difficult month to juggle work and parenting. With no school or limited kaytanot (camps), many parents have grandparents watch their children, work out group babysitting arrangements, or resort to taking vacation days in order to provide childcare.

To explore the difficulties faced by Israelis navigating simultaneous working and parenting — not only during the summer, but throughout the entire year — it’s important to take into account the unique demographic and employment trends in the country.

Israel has a much higher fertility rate than any other country in the OECD: an average of 3.1 children per woman. While the fertility rates in other OECD countries have been declining, Israel’s hasn’t changed much since 1980.

The increase in female employment rates is particularly prominent among mothers with small children. In 2011, the employment rates of women in their 30s who are mothers of children aged 0-4 was 69% — an increase of 17 percentage points from the 1995 rates, and only slightly lower than the rate for women of the same age who are not mothers of young children.

The bottom line is that Israeli society — including its culture, geopolitical situation and governmental policies — has helped encourage both fertility and female participation in the labor market.

At the same time, while Israeli women are working more, men in Israel are not working any less. In fact, employment rates among Israeli men are increasing. In 2014, men in Israel worked an average of 45 hours a week as compared to 41 hours a week on average in the OECD. And, the employment rate among men in their 30s is higher for fathers with young children than for those without young children.

So both men and women in Israel, particularly those with small children, are working at high rates. What does this mean for parents trying to navigate the balance of work and child-rearing at the same time? The question naturally brings us to the topic of the coverage, availability, and cost of early childcare.

From 2003 to 2012, the average household preschool spending per child (ages 2-5) rose by 43%, a rise unparalleled in the rest of the education system and far exceeding the increase in household income or spending. Subsequently, the “stroller protest,” focusing on high preschool costs, became a central issue of the 2011 social protests. Following the protests, the Compulsory Education Law was extended to cover 3-4 year olds and has resulted in a decline in household spending on preschool, though this decline has been felt mostly by the middle and upper class segments of Israeli society. Still, covering childcare while parents are at work often involves paying for afternoon programs which, even when subsidized, often require additional parental spending. A new subsidized after-school program, announced by the Ministry of Education this past July, may help to ease the financial burden of afternoon programs for parents.

As parents often lament, problems arise when the hours of affordable childcare coverage and those of full-time employment simply do not add up. And there is probably no time in the year when this disparity is more apparent than during month of August, when schools do not operate and only very limited, private kaytanot options may be available to some.

The difficulty of finding childcare that is in sync with two working parents could potentially end up affecting young families in a number of ways including the number of hours parents choose to work. Women tend to work in part-time positions in higher proportions than do men – a fact that has further implications, as recent Taub Center research shows that one of the main factors contributing to the gender wage gap in Israel is the difference in the number of hours worked by men and women. The childcare situation could also affect the distance parents are willing to work from home — as women tend to work closer to home than men, and working locally may limit job options.

Other developed countries have implemented policies to address the needs of young families. Over half of OECD countries require employers to allow employees with young children to work part-time. In most such countries, a worker also has the right to revert from part-time back to full-time upon request. In addition, the general trend in OECD countries is to allow employees more flexibility with regard to working hours via adjusting starting and ending times, creating time “bank accounts” where extra hours are recorded and can be used as needed, or by allowing employees to work remotely.

The current employment, fertility, and education trends in Israel create a need for, and likely a lot of parental interest in, policies that will make a modern work/parent balance possible for Israeli families.

About the Author
Tamar Friedman Wilson is the content manager at the Taub Center for Social Policy Studies in Israel.
Related Topics
Related Posts
Comments