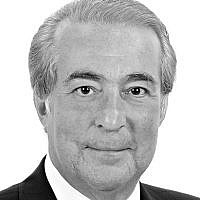 The Blogs
Laurence Brass
Apply for a Blog
Please note that the posts on The Blogs are contributed by third parties. The opinions, facts and any media content in them are presented solely by the authors, and neither The Times of Israel nor its partners assume any responsibility for them. Please contact us in case of abuse. In case of abuse,
Report this post.

Its hard to differentiate between show business and politics in America. Jewish communal politics is no exception. Americans like to have everything stage managed and do not take kindly to anyone or anything which disrupts their plans. Having just returned from the World Jewish Congress in New York, fittingly held in a hotel just off Broadway, I’ve had a chance to reflect on four days of razzmatazz which ended with me being accused by WJC President, Ronald Lauder, of causing “a ripple” in his otherwise meticulously planned Assembly.

The WJC is an extraordinary organisation and I was honoured to represent the UK alongside delegates from ninety countries across the globe. But is there any point in schlepping 7,000 miles if you are just going to sit and watch the jamboree and say and do nothing? Having spent five decades as a political activist in the course of which I’ve attended countless Party Conferences in this country I’ve never quite mastered the art of keeping shtum!

Controversy began on the opening Friday night when delegates were entertained to a superb choral Shabbat service at the magnificent Park East Synagogue with Cantor Helgot (or “Maestro” as he was described) followed by a sumptuous Shabbat dinner. The guest speaker was Nicholas Burns, a former Under Secretary of State for Political Affairs from Harvard. He obviously hadn’t read the script because he launched into a well merited attack on President Trump. “How many of you in this room are the descendants of immigrants”, he enquired. Virtually every hand shot up. “Well guess how many immigrants the Trump administration has allowed to enter the US since the election? Not one”, he told us. “Americans should be ashamed and you should all go to the Statue of Liberty and drape a blanket over it”. Three hundred diners almost choked on their chopped liver. I stood and cheered whilst the US delegate on the next table mumbled expletives under his breath. I asked European Jewish Congress President, Moshe Kantor, if he had welcomed Ambassador Burns’ words. “Not at all, he declaimed “the man’s not a diplomat”.

On the second night of the Assembly, all 700 delegates were taken out on a ferry to Ellis Island for a banquet in the iconic Registry Room where most of the Jewish immigrants to the USA originally arrived. We didn’t pass close enough to America’s most famous monument to drape the blanket we had been urged to cover it with! It was a memorable evening but the irony of celebrating immigration in a country that now bans it was too much for many delegates.

The last morning saw the eagerly anticipated debates. The tone was set with a sombre warning about the importance of “unity and avoiding discord”. Hardly a recipe for a free and frank exchange of views! After a series of bland resolutions delegates moved on to the resolution on the Middle-East peace process. The wording was designed to please all factions with the usual denunciation of Palestinian terror and reaffirmation of the two state solution. But nowhere was there a reference to the settlement issue which many believe to be an impediment to peace. I proposed an amendment calling on Israel to cease settlement expansion. Suddenly my microphone went dead and I was invited to withdraw my amendment “in the interests of unity”. By now dozens of delegates were egging me on and I was in a dilemma. I eventually agreed to ask for the subject to be referred back to the policy committee which at least ensured that this topic will be seriously considered. Encouraged by the support my ideas had generated, another UK delegate, Amos Schonfield, had the temerity to question the resolution about the future status of Jerusalem. At least we did manage to have these important subjects aired and for a few minutes at least the procession of self-congratulatory speeches from the platform was halted.

The great delight of the WJC is to meet delegates from so many different countries. It was reassuring to be congratulated by colleagues from as far apart as Africa, South America and Asia for airing subjects that their communities really cared about. President Lauder did not share their view. In his closing address he commented on the “ripple” that had been heard in the morning and glared at the UK delegation. We had made our mark. I packed up the complimentary bottles of perfume Lauder had given delegates and headed back to London.

Laurence Brass was part of the UK delegation, but writes this in a personal capacity. His views are not representative of the Board of Deputies.