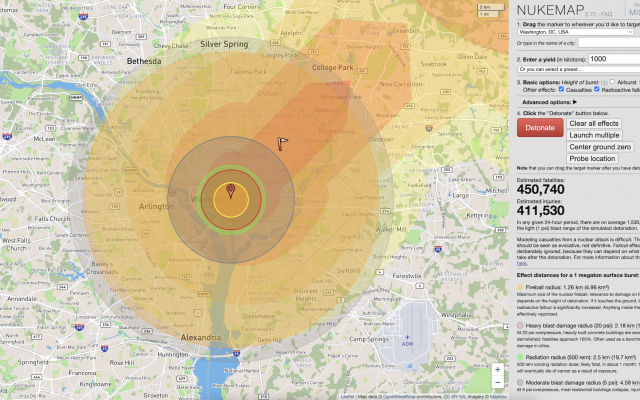 Even though it’s supposed to be a leisurely Sunday morning, I woke up very early in somewhat of a frenzy and panic. My first thought as I reached for the iPhone was to check the breaking news to see whether a nuclear blast went off last night.

Listen, it’s really not surprising to be extremely concerned and even fearful of a nuclear exchange at this point. With Russia’s despicable unprovoked war in Ukraine going on since February and regular threats of escalation to nukes, we’re all getting on edge. Already in April, a CBS poll found that 70% of Americans were worried about this going nuclear!

And unfortunately, things have only escalated since then, with Putin now bringing things to the precipice now by annexing the territories of Donetsk, Luhansk, Kherson, and Zaporizhzhia—15% of Ukraine—and declaring menacingly that he’s “not bluffing“ about using nukes when he says that:

We will defend our land with all the powers and means at our disposal.

So, while Ukraine has turned the tides and Russia is losing on the battlefield against highly determined Ukrainian troops fighting for their survival with high-tech Western smart weapons, Putin has drawn a line in the sand saying that Russia will never relinquish this land that they now consider part of Mother Russia itself. Thus, Putin has left zero room for negotiation or compromise. If the Ukrainian counterattacks continue to try to regain their land, and Russia has no viable military options left, then they will turn to weapons of mass destruction. Clearly, if Putin doesn’t use everything at his disposal to win (and win he must), then Russia as a superpower will be the true laughing stock of the world, and Putin himself will be toast!

Talking to a neighbor this morning about the escalating risks of the use of nukes and the possibility of this turning into World War 3, my neighbor said:

First, we had the COVID pandemic that kept us on the edge of our seats for two years. Then we had inflation, rising national debt, the economic recession, and a bear market that we’re still struggling with. And now we have a real threat of nuclear war between NATO and Russia. This is really bad!

Thus, I would imagine that there are plenty of people having some restless, if not sleepless nights. Just a couple of weeks ago, an article in the Wall Street Journal reported on the recommendations of a U.S. panel that:

Most adults should be screened for anxiety [as well as depression].

If you’re really not sure what the concern is with even a limited nuclear exchange, you can try out the interactive “NUKEMAP” by Alex Wellerstein, a historian of science and nuclear technology. The Nuke app is easy to use. You put in the city, the number of kiloton yield for the nukes, and check some basic options like whether it’s a surface strike or an airburst, and you hit the bright red “Detonate” button. Immediately, you can see the results on the map as well as the number of fatalities and casualties.

I tried the simulation using a 1,000 kiloton nuke strike (that would be a standard strategic nuclear weapon) on Washington, D.C., and immediately, you can see in the screenshot the bands of the fireball, heavy blast damage, radiation radius, and so on. Most importantly, you can see the estimated deaths and injuries of almost a million people all together. And that would be just one simple nuke!

In short, if you find yourself worrying or can’t sleep at night thanks to Putin, feel free to experiment with the Nuke Map, and see what things could easily look like in the world the morning after (whether from Russia, China, North Korea, or arch enemy Iran).

With Yom Kippur on Wednesday this week, when the Book of Life (or G-d forbid, death) is sealed for the coming year, we really have much to pray for in terms of G-d’s mercy on us and the world. May Hashem save us from pandemics, a horrible economy, and a Putin nuclear war. With or without the Nuke Map, you should be able to see that we are completely in G-d’s hands!