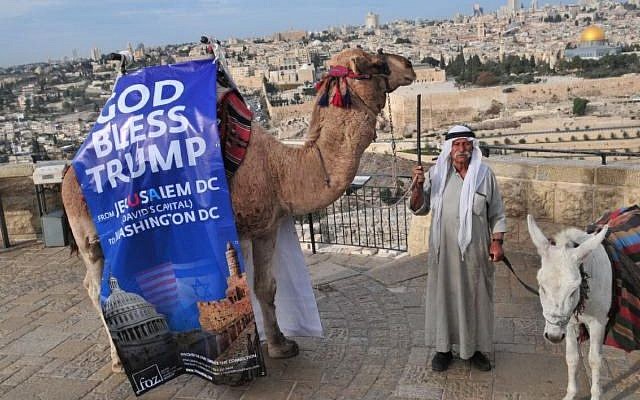 Israel extraditing Trump or anyone of his extended family? Unthinkable. There is no political basis in the Holy Land to return Trump to the US once he chooses to come to Israel and decides to stay here in exile.

How would that compare to just moving the US embassy?!

The whole Trump clan can immigrate and settle here and get new immigrant benefits as several of them are Jewish for the Law of Return. No sending away at the border because they are not Norwegian enough. Even when Trump is found out to be bankrupt (again) – admitting it or not – he will be admitted.

Also, the reach of the US Tax Authorities will be limited here. Of course, the Israeli paparazzi will be following them relentlessly but maybe that will give them a homey and important feeling.

They probably will get themselves a group of fancy homes in the high-end Herzliya Pituach resort (golf!) plus an optional Jerusalem house for Shabbat and Festivals and a Tel Aviv residence closer to cultural events.

Trump will make (good) money from speaking tours (some for free as charity), locally or (via the Internet) internationally and continue their political and economic discussions with Middle-Eastern Arab rulers.

(One unseemly thing that Trump has caused has gone unreported until now. It was always well-known that lying is rampant among (lawyers and) politicians. There are honest ones but they only confirm the rule. Trump has made a caricature of politics and in comparison, many now assume that most politicians are noble and frank. They’re not. They are liars and manipulators, not be trusted who must be held to their word. Almost all honorable politicians are just idiots – what good do they do?)

Meanwhile, the unsympathetic portrayal of Trump’s court Jews in the regular US press is gaining speed. After repeatedly depicting Steven Mnuchin as a bloodthirsty monster, now Jared Kushner is excessively on the chopping block. Michael Cohen, meanwhile, now as Trump’s enemy, is off the hook, but there still is no positive coverage about him either.

Also Israeli Jews are not spared in accusations of enabling a murderous regime. (The old trick: progressive countries won’t support Israel and then when it seeks support elsewhere, it is blamed. One of the most reactionary regimes Israel is close with is the US, but to that the US critical press is blind, of course.)

(If G^d wanted to set the whole world right, He should’ve done so before the Holocaust. He didn’t, so from that I prove that He will not do this any time later either. It’s our job to partner with Him and He’s awaiting our active participation. So you won’t hear me say that this polarization between Jews and their friends or the one hand and the rest of mankind on  the other is part of the unfolding Last Days before Redemption (though it is tempting to posit this). Peace on earth will need to come from our effort. This should involve a stop to abusing our planet and its people (wars, exploitation!). What, exactly, is keeping us so long?

Most left-wingers seem to place their hope in some sort of a political Messiah, a kind of Ideal Leftwing Daddy (or Mummy) who should turn things around and save us all. Much more practical and useful would be to force a rightwing leader to do the right things for the planet.)

Mr. Trump, you’re more than welcome here. But you must keep your hands to yourself and not be too free with women or other people’s money or you’ll end up in jail here. Israel has very potent laws in those respects. Oh well, try to remember that you can’t have it all in life.