Fauci’s NIAID is the primary institute in the National Institute of Health that funds biodefense. As it gains prominence in US biodefense policy, and with suspicions growing about a dangerous biodefense arms race between US and China, a new regulatory framework is needed to address emerging biotech dual-use challenges

Last month the Trump administration cut the US National Institute of Health (NIH)’s funding to China’s Wuhan Institute of Virology, the lab in midst of controversy over Covid-19 origins.

The project was run by EcoHealth Alliance, a nonprofit that has been working with the Wuhan lab for more than a decade to study bat coronavirus.

EcoHealth Alliance has been involved in US biodefense programs such as USAID’s PREDICT for early detection of emerging pathogens and received a $3.37 million grant from the NIH’s National Institute for Allergy and Infectious Disease (NIAID).  It is also part of Pentagon’s GRITS (Global Rapid Identification Tool Set) and received a US$4.47 million grant in 2015 from the Defense Threat Reduction Agency (DTRA).

DTRA also awarded EcoHealth Alliance a US$2.32 million grant from 2013-2015 for research and development in biotechnology, underscoring the increasing blurring of life science and high technology in US biodefense policy.

According to a 2018 study sponsored by DTRA and the US Air Force Academy entitled “Roadmap for Biosecurity and Biodefense Policy in the United States”—in which Northrop Grumman, Bill and Melinda Gates Foundation, EcoHealth Alliance, and several universities participated—biotechnology is a rapidly growing and lucrative market, with global biotech market predicted to reach US$727.1 billion by 2025.

The rapid pace of change in this industry presents opportunities to leverage new capabilities to advance medicine, healthcare, and prevent harm, yet due to its dual-use applications, also face challenges of potential bioterrorism and weaponization of these advanced technologies.

As such, US biodefense program has also experienced commensurate growth. Before 2001, biodefense research was conducted by a small group of scientists with a mere $60 million annual budget in 1999, 2000 and 2001.  At the same time, NIAID—the primary institute within NIH that funds biodefense—had a funding level of US$270 million in 2001 for research on overlapping pathogens.

Shortly after 9/11, the Pentagon received an annual increase of US$30 million in biodefense funding, whereas the Department of Health and Human Services (HHS) received a whopping budget of more than US$1.5 billion. In fiscal year 2020 HHS received a budget of US$93.4 billion, with US$42 billion and US$5.89 billion allocated to NIH and NIAID respectively.

For the past two decades, biodefense funding has continued to increase, supporting basic research, identification and characterization of pathogens, bio-surveillance, medical countermeasures such as vaccines, and microbial forensics.  NIH provides a large portion of federal grants to support these research projects especially in university labs.

However, government policy faced difficulties keeping pace with rapid advancements in the biotech landscape such as genetic engineering, 3D and 4D printing of biological tissues, bio-based sensors to detect radioactive molecules, or research using DNA molecules to store data, including image, video and audio information that is supported by Microsoft Corp.

Governance and oversight over these research projects are also problematic, increasing risks of theft, diversion, accidental release of pathogens, and malicious use of biological material and information in bioterrorism.

Indeed the 2018 report outlined the problematic bifurcation of US biodefense policy with one group focused on these security risks, while the other group focused on building up scientific and technical capabilities for early warning, preparedness, and response to natural, accidental or deliberate biological threats. 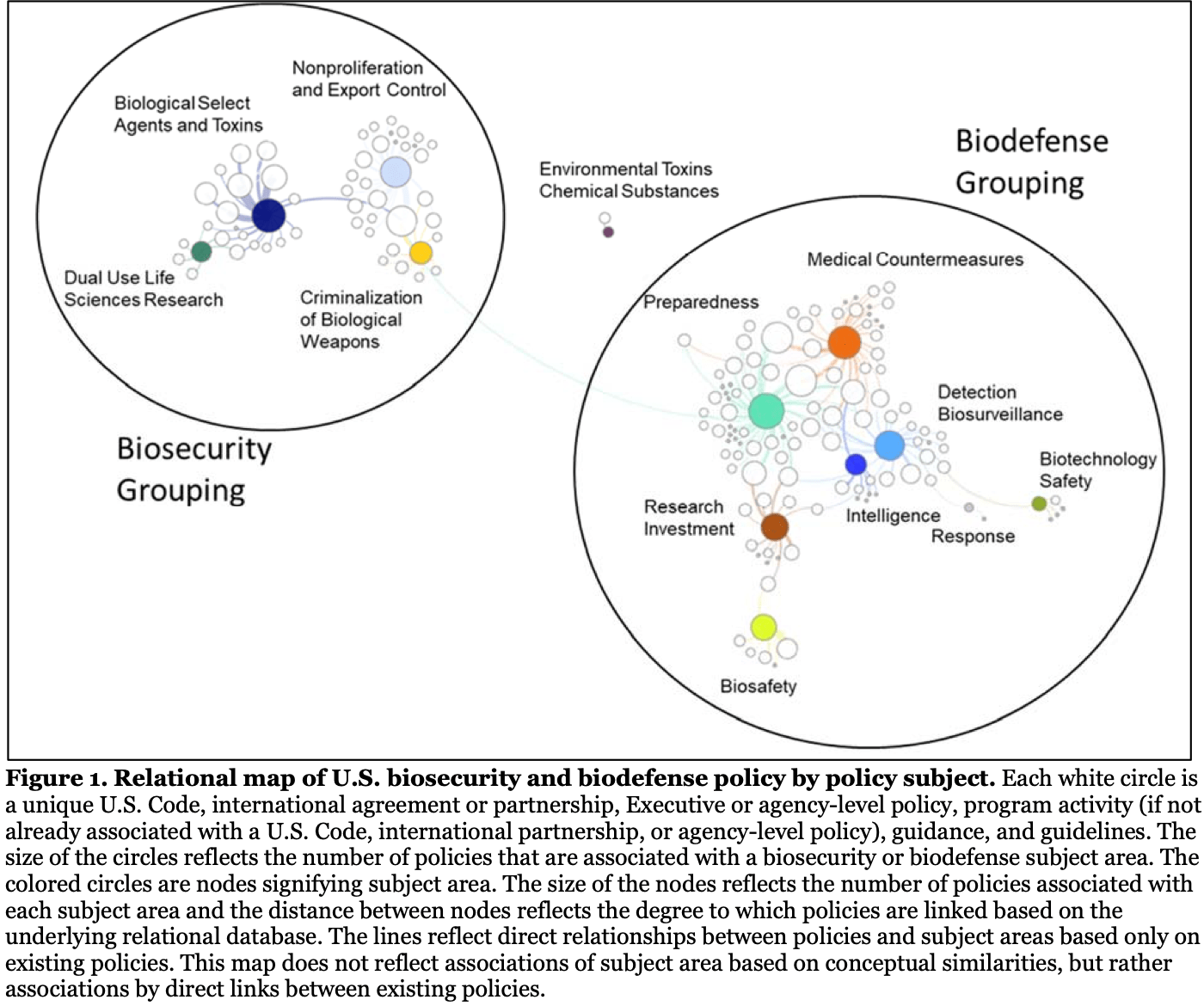 Source: “Roadmap for Biosecurity and Biodefense Policy in the United States”, 2018.

However, the bifurcated model is largely reactive, and as Covid-19 has revealed, dual-use research in the biosecurity grouping often has risky consequences for the biodefense grouping.  As such there should probably be some overlapping of the two circles, for better information sharing and situational awareness from both groups in a constant feedback process.

Concerns over biosafety and biosecurity of high-containment labs have also been well documented as an ongoing problem in the US and abroad. Severe acute respiratory syndrome (SARS) escaped twice from a Beijing lab in 2004 while in 2018, the State Department raised concerns about Wuhan lab safety violations.

In 2015, the Pentagon discovered one of its lab inadvertently sent live anthrax to 200 other labs worldwide over a period of 12 years, while in 2009, European governments investigated US drug maker Baxter when it sent vaccines contaminated with live avian flu virus to several countries. In 2017, the same company was fined US$18 million for violating US Food and Drug Administration regulations with persistent contamination in its manufacturing facilities.

Given Baxter also received Pentagon and NIH contracts to develop treatments for effects of exposure to chemical and biological agents, lab safety violations and accidental releases of pathogens and toxins give rise to harmful conspiracy theories.  Indeed a criminal investigation was filed against Baxter for allegedly attempting to provoke the swine flu pandemic in 2009, similar to current charges of bioterrorism levied against China and its Wuhan lab.

With these fringe theories, there is a risk that mounting suspicions may provoke a dangerous biodefense arms race between great powers. In the face of NIH’s rising role alongside the Pentagon in US biodefense policy, the US government would likely need to consider a new framework of oversight and regulation to address these emerging challenges posed by the growing biotech industry.