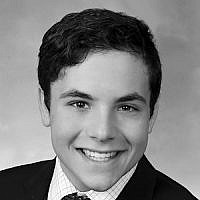 The Blogs
Micah Thau
Apply for a Blog
Advertisement
Please note that the posts on The Blogs are contributed by third parties. The opinions, facts and any media content in them are presented solely by the authors, and neither The Times of Israel nor its partners assume any responsibility for them. Please contact us in case of abuse. In case of abuse,
Report this post.

“So that there will not be a child with a father and a father.” This jarring slogan was at the center of a campaign initiative by supporters of the so called Yachad party. The ad campaign decorated the streets of this great nation starting two weeks ago and caused a flurry of responses on social media.

Labor MK Merav Michaeli asked on Twitter, “How much fear and hate must a person have to run such a campaign?” while newly minted Kahol V’Lavan‘s number two man Yair Lapid clapped back at the man whose face is prominently featured on the ad, Eli Yishai, saying: “With a father like you, preferably not.” 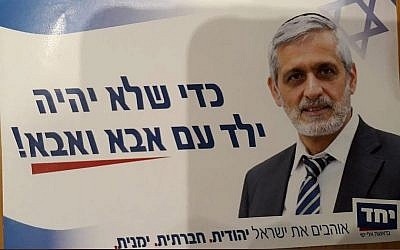 Election poster created by supporters of Yachad Party leader Eli Yishai showing him with a slogan that says ‘So that there won’t be a child with a father and a father.’ (Twitter)

While the advertisements astonished many, as a gay man myself, none of this was the least bit surprising for me. For one thing, portraying gay men as a danger to children is about as fresh an idea as the week old challah sitting on Eli Yishai’s countertop. Moreover, fear mongering about the dangers of a minority population without fact is unfortunately a regular occurrence in human history.

Whether it is LGBT people, Jews, or any other underrepresented population on the world stage, politicians have always spun fictional apocalypses by weaponizing minority communities for political gain. The fact that this tactic is being used today is therefore no more a surprise than the unfortunate fact that this political drivel is still effective.

Additionally, it does not even deserve the dignity of a response, as the purveyors of this repackaged age-old homophobia wouldn’t care that overwhelmingly, scientific evidence suggests that there is no discernible difference in the outcome of children of same sex relationships in comparison to their heterosexual counterparts.

However, what does warrant a reaction is the consistent exploitation of the LGBT community as a political chess piece. For years our community has been trotted around like some political trophy wife to prove the state’s liberal nature while our needs are simultaneously ignored.

Whether it was Netanyahu admitting that his position as prime minister superseded my rights as a citizen during the surrogacy controversy last year. Or the failure to designate hate crimes against LGBT people as such. Or the catastrophic negligence exhibited by the Jerusalem police department in failing to protect the Pride Parade in 2015 from a known violent bigot that resulted in the killing of an innocent girl. Over and over again this country has used the LGBT community as a rainbow puppet talking point and disregarded our demand for equality.

Being the LGBT rights capital of the Middle East is the lowest of all conceivable barometers and whether our existence is used to stoke fear or as a public relations tool, this predicament leaves people in my community feeling lost on who to support this coming election.

One of my best friends, a right-wing LGBT person himself, shocked me the other week when admitting he was planning to vote for Meretz this coming April. I pushed him and asked why he would vote for a party that did not represent his values in any way? He responded that it was the only party that would fight for our rights as LGBT people. That, just as the Haredim and right wing religious Zionists get their needs addressed by backing a party built for them, so too, we must vote for parties that represent our community in government.

In my mind there are two significant problems with this approach. One, it creates small and divided parties, the kind that politicians like Netanyahu count on to split the public’s opposition vote.

The second is that by splitting the public into various interest groups, elections produce lawmakers that are interested only in the well being of their identity based constituency. In other words, this breeds a generation of politicians that value their particular group over the well being of the state and that is poisonous for any democracy.

Good statesmanship requires compromise, a brand of politics determined to better the future and an understanding that country comes before everything.

Sectarianism, however, stymies compromise, focuses almost exclusively on immediate gratification of the constituency and puts the country second to the group agenda.

Additionally, sectarianism denies a self evident human truth: People are more than their identities. I am more than what gender I am attracted to and it is appalling that at times I feel as if I have to choose between my rights as a gay man and my genuine political philosophy. Is there no world where I can value my nation’s security and its Jewish character and at the same time demand equal rights?

There is no reason to vote for Meretz or any other party if I don’t believe what they stand for and there is no pride in a system that forces people to choose between being traitors to their communities or to themselves.

True freedom is the ability to vote not out of fear but out of pride. To pick parties that represent not our sectarian groups but the values and thinking that we espouse. Democracy is the bold idea that all people are created in the image of God and can work together to build a country as equals. This tribalist identity politics war not only reduces people to flags and slogans, it pits Israelis against each other and that formula has never worked out well for the Jewish people. Ironically, while we don’t need Eli Yishai, what we do need is true Yachad (unity).

About the Author
The writer is an author of the Eshel Pledge, has written in the Los Angeles Jewish Journal, the Jerusalem Post and has a blog for the Times of Israel. He recently emigrated to Israel and lives in Modi'in as he prepares to enlist as a lone soldier in the IDF.
Related Topics
Related Posts
Comments