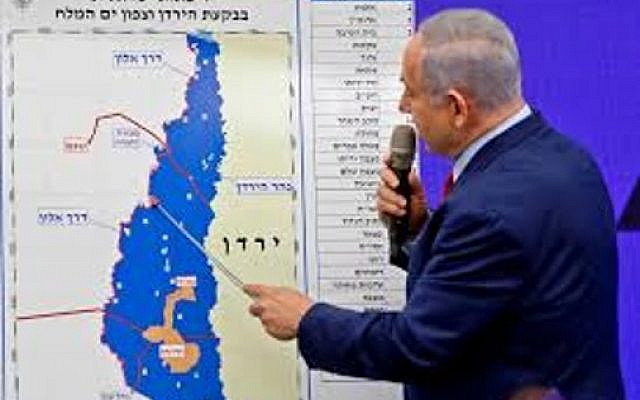 The Coalition Agreement which forms the basis of the new Israeli government includes the possibility for Prime Minister Netanyahu to proceed – with US blessing and as part of the new US peace proposal, plus a host of other conditions – with the ‘annexation’ (or ‘application of sovereignty’, however one chooses to call it) of parts of the West Bank/Judea & Samaria.

This has caused controversy both in Israel and among Diaspora Jews – even among staunch Zionists.  Yachad (Hebrew for ‘together’ – a group of hard-left British-Jewish activists who proclaim themselves as ‘pro-Israel’ but rarely, if ever, have anything positive to say about the Jewish state) has been particularly vocal in the campaign against ‘annexation’.  So far – so legitimate; nothing wrong with that.

But legitimacy – along with credibility and respect – evaporates when exposed to crass intellectual dishonesty.

One doesn’t need to lie in order to oppose ‘annexation’; one can campaign – even campaign passionately – without trying to deceive.  Passion is not a licence to cheat. 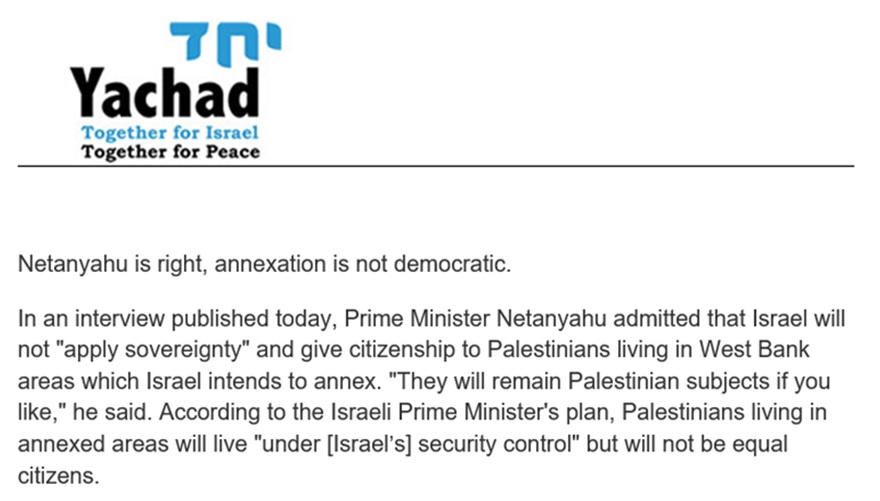 On 28 May 2020, Yachad’s Director sent a newsletter to the group’s list of contacts.  This is what she wrote, among other things:

Netanyahu is right, annexation is not democratic.

In an interview published today, Prime Minister Netanyahu admitted that Israel will not “apply sovereignty” and give citizenship to Palestinians living in West Bank areas which Israel intends to annex. “They will remain Palestinian subjects if you like,” he said. According to the Israeli Prime Minister’s plan, Palestinians living in annexed areas will live “under [Israel’s] security control” but will not be equal citizens.

Now, let’s go to the interview that Yachad refers to (but without providing a link to the English text, and without quoting the relevant passage of the interview in English!)  Here’s the question and Netanyahu’s response, which the newspaper even provides with the subtitle “A Palestinian enclave”:

Q: Nevertheless, several thousand Palestinians live in the Jordan Valley. Does that mean they will receive Israeli citizenship?

[Netanyahu]: “No. They will remain a Palestinian enclave. You’re not annexing Jericho. There’s a cluster or two. You don’t need to apply sovereignty over them, they will remain Palestinian subjects if you will. But security control also applies to these places.”

Clearly, Netanyahu talks about areas (such as the city of Jericho) that will not be annexed by Israel.  The US ‘Peace to Prosperity’ Plan describes such Palestinian enclaves – areas of Palestinian sovereignty connected to the envisaged State of Palestine by access roads.  Since they live in areas earmarked for the future State of Palestine, the inhabitants of these enclaves are Palestinian citizens, not Israeli citizens.  Conversely, there are also Israeli enclaves in the midst of the Palestinian state; these are connected to Israel through access roads and their inhabitants are citizens of Israel.  Here is the exact wording of the Plan:

The Israeli population located in enclaves that remain inside contiguous Palestinian territory but that are part of the State of Israel shall have the option to remain in place unless they choose otherwise, and maintain their existing Israeli citizenship. They will have access routes connecting them to the State of Israel. They will be subject to Israeli civilian administration, including zoning and planning, within the interior of such Israeli enclaves. They will not be discriminated against and will have appropriate security protection. Such enclaves and access routes will be subject to Israeli security responsibility.

You’re not annexing Jericho. There’s a cluster or two. You don’t need to apply sovereignty over them, they will remain Palestinian subjects if you will.

Netanyahu admitted that Israel will not “apply sovereignty” and give citizenship to Palestinians living in West Bank areas which Israel intends to annex.

This, without the shadow of a doubt, is twisting Netanyahu’s words.  It’s horribly misleading.  But, worse, I believe it is a deliberate misinterpretation, an attempt to deceive.  Here is why: 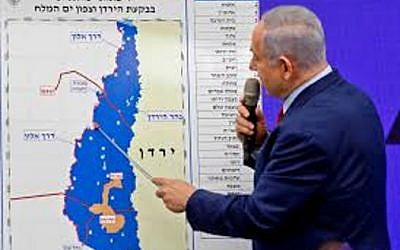 Netanyahu has previously explained the extent of his planned Jordan Valley ‘annexation’. The orange patch in the thicker part of the blue area is the Jericho area. This is part of Area A and is not included in the planned ‘annexation’. {Youtube screen capture}

Yachad may point to some Israeli journalists (notably Ha’aretz) who made the same dishonest claim.  But two liars don’t make a truth.  At least Ha’aretz published the original fragment from Netanyahu’s interview, allowing people to judge for themselves, to spot the spin.

Yachad’s Director now has a last-ditch opportunity to be a mensch: she can write to the group’s contacts, apologising – without reservations, without ‘hochmes’, without trying to squeeze further dishonest propaganda from what she will say is an honest mistake.  She should furthermore publish her apology in the Jewish News and Jewish Chronicle – the same newspapers the group often uses to convey their other messages.  She should apologise in situ for the equally misleading social media posts.

If she chooses not to do all that, then the verdict is inevitable.  This is not about ‘annexation’ or Israel – we can agree or disagree on that.  It’s about ethics; it’s about salvaging a remnant of credibility.

Intellectual dishonesty is always off-putting.  But it is never more appalling than when employed by the self-righteous, by those who seek to cover themselves in the noble mantle of morality.  Lies and deceit make shaky rungs on a ladder leading not to high moral ground – but to the depths of moral turpitude.

Correction: a previous version of this article mistakenly stated that no link to the interview was provided in Yachad’s newsletter.  It was – though the link was to the text in Hebrew (a language most British Jews do not speak) and it was included in the ‘Read more’ section at the bottom of the newsletter, where most people would probably ignore it, as I initially did.