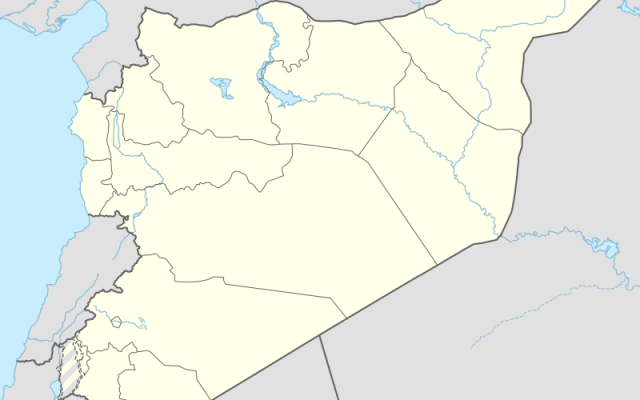 “Killing the flowers will not delay the spring” is written on a wall in the Palestinian district of Yarmouk, Syria. It is one of several intense shots that Palestinian director Abdallah Al-Khatib shows with grace and eloquence in his film Little Palestine, diary of a siege.

This film portrays life in the place that until a few years ago concentrated the largest number of Palestinian refugees in the world. Although Yarmouk is referred to as a “camp” it is actually a small town of streets and buildings. It was filmed between 2013-2015 by one of its residents, and gives testimony to the period in which the Syrian government imposed a cruel siege on the entire district of 160,000 Palestinians to force the surrender or exit of the rebel forces, in which 181 people died of starvation. In a tragic twist of fate, Yarmouk was captured by ISIS in 2016 and two years later the Syrian and Russian air force destroyed 80% of it, the film reports. Currently only a few dozen families reside there, as the Bashar al-Assad regime forced the Palestinians into a new exile. The director of the film, for example, lives in Germany today.

In a review for Variety, Emiliano Granada defined the film as “a love letter to his fellow citizens and their humanity amidst a profoundly inhuman situation.” Khatib endows the film with an unmistakable poetic aura, either through his delicate brushstrokes or through the reflections that accompany the story, such as this one: “The siege is as long as a day in prison, like a railway station on a hot summer´s day; a path leading to madness or suicide. Under siege, time is the true prison of the besieged.”

The director shows scenes from everyday life. Several include the child population, which looks naively happy; at the beginning at least. A boy tries to fly a balloon, until it pricks. Some girls sue for peace, while blushing at the camera. Towards the end we meet Tansim, a girl who with overwhelming stoicism and fearlessness, collects potentially poisonous herbs to bring home; the meager food she can access in a besieged town. The dialogue that the director establishes with her is moving, and it is impossible not to remain thinking about the fate of that girl after the film´s end. Did she survive Bashar al Assad, ISIS, Russian planes, hunger, lack of medicine and the brutal collective demoralization that surrounds her? One hopes so.

In an intermediate scene, a well-dressed teenage girl in black pants and sweater and wearing a coat, cap and boots -all in red- walks along what appears to be the main avenue of Yarmouk towards the director’s camera. It lasts a few long seconds, and the contrast with the muted and sad tones that characterize the entire film -although shot in color- is noticeable. To the point that it reminded me of that iconic scene from Schindler’s List (shot in black and white) in which a girl dressed in a red coat walks in a Polish ghetto under Nazi attack. I was concerned that the Palestinian director may have wanted to create an association. I was able to ask him about it at a Zoom meeting organized by the French in Motion organization. I chose to simply ask him about the meaning of that image, without inserting the reference to Spielberg’s film, so that I would not be the one to introduce the subject of the Shoah in the debate. Khatib said that this was one of his favorite moments in the film, given the naturalness and self-confidence with which the teenager moved in an otherwise horrifying context. I will grant him the benefit of the doubt.

“For Yarmouk,” wrote Jonathan Steele in The Guardian, “to become a spectacle of suffering far worse than Gaza, marked an indelible stain on the mantle that Bashar al-Assad inherited from his father.” Without intent, Abdallah Khatib reminds us that Palestinian suffering exists even when no one can hold Israelis responsible for it. Although the filming ended six years ago, its publication in April of this year -almost coinciding with the latest Hamas war against Israel- gives it a unique moral prominence. Palestinian misery, even when caused by Arabs and thus cannot be used as a tool to condemn Israel, deserves to be told. In a sense, this film depoliticizes the Palestinian refugee issue and frames it in its essential humanitarian nature.

Those genuinely interested in learning more about modern Palestinian history will find a landmark documentary in Little Palestine, Diary of a Siege. Those who engage in selective moral indignation, don’t bother to watch it. This is not an opportunist-friendly film.

About the Author
Julian Schvindlerman is an Argentine writer and journalist specializing in Middle East affairs. He lectures on World Politics at the University of Palermo (in Buenos Aires) and is a regular contributor to Infobae and Perfil. He is the author of Escape to Utopia: Mao's Red Book and Gaddafi's Green Book; The Hidden Letter: A History of an Arab-Jewish Family; Triangle of Infamy: Richard Wagner, the Nazis and Israel; Rome and Jerusalem: Vatican policy toward the Jewish state; and Land for Peace, Land for War.
Related Topics
Related Posts
Comments
Advertisement