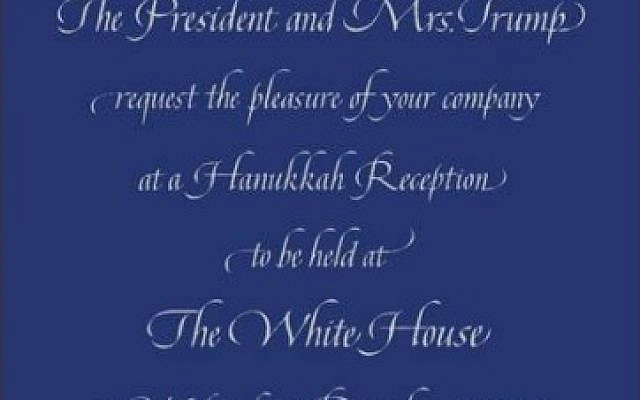 My invitation to the White House Hanukkah Reception

I’ve been privileged to have been invited to the White House by Presidents Bush, Obama and Trump. While many people are invited to the White House holiday parties because they’re employed at or support an organization, are a supporter of the President, or have achieved something remarkable, I’m proud to be invited due to my exceptional students. My students are frequently invited for meetings at the White House. During meetings with key administration officials, they advocate for a strong U.S.-Israel relationship. My students have a sterling reputation for being respectful and knowledge activists. They begin each of their comments thanking the President and his staff for a specific act of support the administration has shown Israel. My students understand that criticism is an ineffective method of bringing about change. They never criticize an elected official. If there is a policy they disagree with, they advocate for a more supportive policy they’d prefer the President to follow.

There are many reasons people have told me not to attend this year’s White House Hanukkah party. First and foremost are safety concerns over COVID. Media reports characterized past White House events as “super spreaders.” As someone who is neurotic about Corona – I rarely leave my house – traveling from Israel to America and then attending a party in a closed indoor area is inconsistent and possibly dangerous. Others have cited President Trump’s post-election behavior and stated that by attending his Hanukkah party, I’d be condoning his behavior. Lastly my “never-Trump” friends see any interaction with President Trump as beyond the pale of acceptability.

I have spent weeks weighing these concerns and decided to attend the party. First, the Talmud places great value on personally seeing kings and world leaders; it goes so far as to allow Cohanim to violate the prohibition of entering a cemetery if the march on graves will save time to see a king. The American Presidency is the most powerful and honored institution in the world. It is a privilege to experience it firsthand. Second, Hanukkah celebrates the miraculous military victory by weak Jews over the world’s super power. Thousands of years ago the Greeks persecuted the Jews. Thousands of years after the Hanukkah miracle, the Germans repeated the Greeks’ persecution and an American president, FDR, wouldn’t even meet with Rabbis to hear about the Holocaust taking place. Today, the President welcomes Jews into the White House to celebrate Hanukkah. What a turnaround! The opportunity to witness the transformation in Jewish history is a privilege not to be missed.

I teach my students that supporting Israel is achieved by supporting the decisions of the democratically elected leaders of Israel, not by arrogantly prescribing to Israel what policies are best for it to follow from across the Atlantic Ocean. No American President has been as supportive of Israel as President Trump. His policies on Israel have remarkably improved my life and the lives of all Israelis. People critical of President Trump’s support of Israel are generally critical of the policies of the democratically elected government of Israel. They define support of Israel as being critical of the Israeli people’s choices.

I have tremendous gratitude to President Trump for the way in which he supported Israel and strengthened the U.S.-Israel relationship. I teach my students that even if you disagree with an American president, and even if you oppose him, it is important to show gratitude for the good policies they enacted that helped Israel. I think it is important to attend the party to express my gratitude to President Trump for his support of Israel. By not attending I would be sending an inconsistent message to my students about showing gratitude to American elected officials that support Israel.

Accepting the White House invitation, leaving my house, flying to America, and entering into quarantine for two weeks upon my return to Israel was not an easy decision. I am not completely confident that it is the correct decision. In my analysis, it is best that I attend the party. I have conferred with multiple doctors for advice on the best methods of staying healthy while at the party. I will wear a mask the entire time I am at the White House and I will socially distance away from the crowd. While at the party I will put my health first and foremost above all other considerations. I am grateful to President Trump and the First Lady for the invitation; it is a privilege that I do not take for granted.