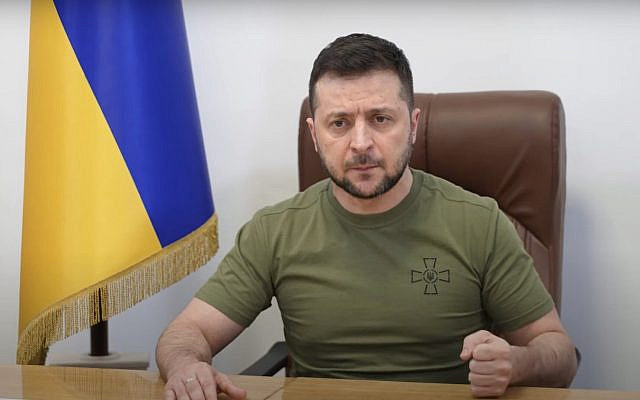 My grandfather’s mother is ashes in Ukraine.

My grandfather’s siblings are ashes in Ukraine.

The Nazis were the authors of their wholesale annihilation; but this bloody book was written by Ukrainian hands as well.

Thousands of people, herded into a building by some Nazi soldiers and their Ukrainian helpers, set on fire, gone.

So yes, I too found the whole “our situation is like the Holocaust, and remember how we chose to help you 80 years ago, now you can help us” line of Zelensky’s speech to the Knesset on Sunday night upsetting, offensive, off-putting. How wrong to implore Israel for help in the name of those few Ukrainians who saved Jews… while ignoring the others, so many more others, who, directly and indirectly, helped Jews, including my family, to their deaths.

But. As wrong-headed as this was, it is also a distraction.

When I look at Zelensky, I don’t see a man cynically twisting history for some nefarious purpose.

(You know who’s doing that? Putin. Let us “denazify” Ukraine, he says. Ukraine is really a part of Russia, he says. Never mind Ukraine’s Jewish president. Never mind the fact that most Ukrainians clearly do not want to live in Putin’s vision, if their ferocious resistance means anything at all.)

I see, instead, a man who is fighting for his people.

(Do you know how many Ukrainians died today?)

I see a man who is moved by despair.

(Do you know how many children were among them?)

I see a man whose ancestors are ashes too, victims of the same Holocaust, so it’s not as though he is shamelessly appropriating other people’s tragedy.

(His grandfather survived alone out of four brothers.)

I see a man trying to hold the line against very daunting odds.

(Three weeks ago, could we imagine Ukraine holding out so long?)

Do I fear that his rhetoric might alienate rather than convince my fellow Israelis? Yes.

But I also think that when we focus on where Zelensky went wrong in his speech, we risk losing sight of the destruction being wrought in Ukraine. We lull ourselves into a sense of outrage at the error in his history lesson and avoid the question of what we should be doing right now — and whether our actions, our words, reflect who we want to be.

Do we allow ourselves to be distracted by Holocaust comparisons, or do we focus on one of the Holocaust’s actual lessons — the fact that, as Zelensky said in his speech, “indifference kills”?

For that matter, do we allow ourselves to get lost in long, meandering arguments about the West’s responsibility for the current situation, NATO’s “irresponsible” expansion, Vladimir Putin’s so-called legitimate concerns… Or do we recall why NATO was needed in the first place, remind ourselves of Putin’s long reputation of ruthlessness and the fate of protesters in Russia itself, and accept that when one country declares another’s autonomy irrelevant, and then follows up with murderous attacks, it is unreasonable to blame the victim?

(“But did you speak back, ma’am,” people sometimes ask victims of domestic abuse. “What did you do to upset him?”)

“You need to provide answers to these questions and live with them,” Zelensky said, after asking why Israel refused to send weapons or fully participate in the sanctions against Russia.

And he is right: when all is said and done, we will have to live with whatever answers we give to this moment in history. Whatever our calculations regarding our level of involvement in the war and in the sanctions, we should ask ourselves not only how they will affect our immediate strategic interests, but also how they will stand the test of time. Who will we be, if we choose this or that path, this or that level of involvement? Where will we stand, in a world united against Putin’s imperialism? Are we champions of self determination, are we a state-wide variation on the court-Jews of old, are we serious players on the world’s wide stage?

Zelensky’s statement cuts even deeper than his particular questions about weapons and sanctions. It delves straight into a bigger question of moral clarity and truth: can we look reality in the face right now, and fail to declare the invasion evil? Dare we hide behind equivocations and diplomatic phrasing, when thousands of people in Russia, with so much more to lose than we do, are brave enough to yell the truth?

Whatever our answer, can we live with it?

Zelensky shouldn’t have compared the invasion to the Holocaust — nor used Ukraine’s World War II record as an incentive for us to act on his behalf.

But what matters now is Israel’s moral clarity. I hope that our leaders will see the horrors that the Russian army is inflicting on Ukraine, recognize the threat Putin poses to world order, and call the Russian invasion the evil that it is. I hope that they ensure that Israel, our Jewish state, will rise to the challenge before us.