The Blogs
Josh Hasten
Apply for a Blog
Please note that the posts on The Blogs are contributed by third parties. The opinions, facts and any media content in them are presented solely by the authors, and neither The Times of Israel nor its partners assume any responsibility for them. Please contact us in case of abuse. In case of abuse,
Report this post.

For over 20 years, the student-soldiers at the Max and Ruth Schwartz Yeshivat Hesder Sderot, currently Israel’s largest Hesder Yeshiva, have played a central role in giving back to their community. 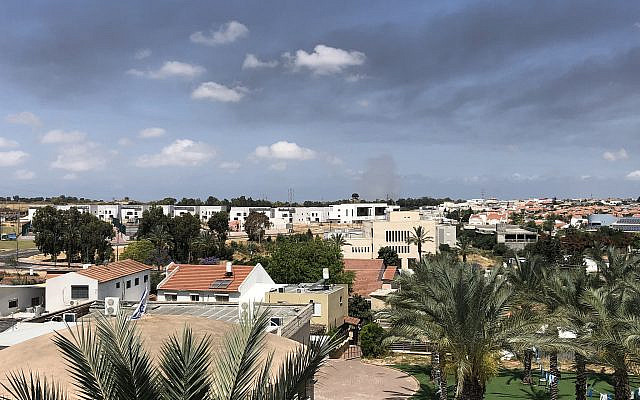 Located just a kilometer from the border with Hamas-controlled Gaza, and despite being under rocket fire since 2001, the institution has become part of the fabric of Sderot, serving as a hub of Torah learning, combined with army service, and chesed, in the western Negev.

In Israel’s most recent military campaign dubbed “Guardian of the Walls,” over 25 of the Hesder students served in Sderot’s “neighborhood emergency response team.”

These volunteers arrived at the scene of rocket landings going door to door to identify and assist those who might have been affected.

Often times during rocket attacks there are those who go into shock (the elderly in particular) traumatized from the incident, and board themselves up inside their apartments. The emergency volunteers find those in need of care, whether physical or psychological, and call in the appropriate professionals to provide assistance.

When the Hesder opened its doors in the 90’s, the students were learning and sleeping in unprotected caravans.  Once the rockets started falling, especially when the fire intensified following Israel’s withdrawal from Gaza in 2005, the Hesder decided that it could no longer operate under those unsafe conditions.

A major renovation was conducted on campus in which most of the new buildings – the Beit Midrash (study hall) and the dormitories were rocket-proofed – built with extra concrete in order to withstand a direct rocket hit.

But not all of the buildings are currently protected. The kitchen for example, where the dedicated cooks and other staff work for hours at a time preparing meals for hundreds of students and teachers, is currently not a safe facility.

In fact, with the loud buzzing of all the machines in the kitchen, sometimes the staff doesn’t even hear the “Tzeva Adom” code-red alerts instructing them to seek shelter when rockets have been fired.

In addition, thanks to the growth of the student body, the Hesder must expand its dining area in order to accommodate all of its students.

In order to protect the kitchen, and expand its facilities, the Hesder is currently embarking on a campaign to meet its needs.  For those interested in partnering or learning more about the campaign, please click on the following link:  https://rootfunding.com/campaigns/sderot-emergency.

Whether it’s learning Torah, IDF service, or giving back to the community on a daily basis, the Yeshivat Hesder Sderot is truly the physical and spiritual frontlines of the State of Israel.

About the Author
Joshua Hasten is the International Spokesperson for Gush Etzion. He is host of the weekly “Israel Uncensored” radio broadcast on The Land of Israel Network, as well as an international Middle East Correspondent in print and on television. Joshua is also a sought-after speaker around the world. His workshops and lectures on pro-Israel advocacy have impacted thousands. Joshua was the CAMERA organization’s 2009 Letter Writer of the Year, and is a member of the Judea and Samaria Speaker’s Bureau. Originally from Indianapolis, Indiana, he resides in Gush Etzion, Israel.
Related Topics
Related Posts
Comments
Advertisement