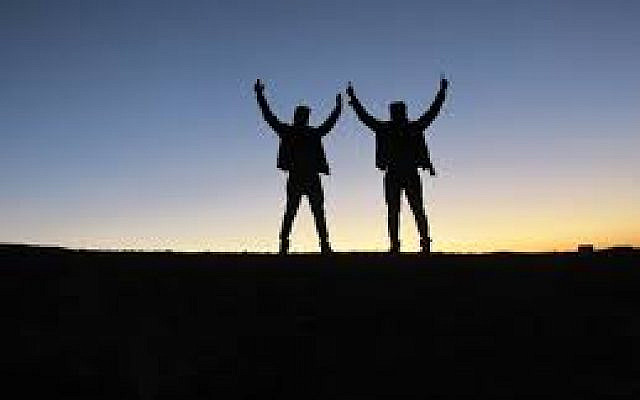 The Midrash tells us that Moshe’s father-in-law Yitro (Jethro) had seven different names by which he is called in the Bible: Yitro, Yeter, Reuel, Chovav, Keini, Putiel, and Chever. The Midrash explains how each of these appellations applies to Yitro, but for the purposes of our discussion we will focus only on two names. Yitro is called Reuel because he became a friend (reyah) of G-d, and he is called Chever because he became a friend (chaver) of G-d. These two names of Yitro conjure two different Hebrew words which mean “friend”. In this essay we will explore the implications of these two words and how they are not totally synonymous. We will also discuss a third word for “friend” — amit.

Rabbi Elazar Rokeach of Worms, a late 12th century Asheknazic scholar, in his commentary to the Siddur, explains the differences between these three words for “friend”. He argues that chaver is a friend who has left his original place and has attached (chibbur) himself to another place (like a member of a society is called a chaver of that body). Alternatively, he explains that chaver refers to two people who were separated and now came close to each other, like old friends reunited. The word amit is somebody who comes sometimes, but not so frequently. Therefore, it implies a lesser degree of intimacy than the word chaver does. The word reyah, on the other hand, is somebody whom one is with frequently and to whom one reveals his secrets.

Rabbi Shlomo Aharon Wertheimer (1866-1935) offers a slight variant on this explanation, but the gist of it matches what Rokeach writes. He writes that the word chaver, which is related to the word for connection, implies affinity or connection in one shared aspect (e.g., “We are friends because we both go to the same school.”). By contrast, the word amit, which is not related to connection, denotes a person with whom one enjoys a business relationship. The word reyah tends to denote complete affection, and is the ultimate form of companionship. In short, Rabbi Wertheimer also understands that amit denotes a less intimate associate, reyah the most intimate companion, and chaver somewhere in the middle. (When G-d commanded the Jews to ask of their Egyptian “friends” to borrow gold and silver vessels in Exodus 11:2, the Torah uses the word reyah, which implies a very close form of friendship. I’m not sure what to make of this.)

Should we try to translate these terms into the English vernacular, chaver would mean “friend”, amit, “acquaintance”, and reyah, “confidante”. Indeed, the Bible itself implies that reyah refers to the closest form of inter-personal relationships. When discussing different people whose negative influence might cause a person to commit idolatry, the Torah (Deut. 13:7) mentions “your friend who is like yourself” (rayacha kinafshecha). Similarly, the Torah commands ve’ahavta l’rayacha kamocha, “love your fellow like yourself” (Lev. 19:18). In some places in Rabbinic literature the commandment to love one’s rayah like oneself is specifically applied to one’s wife (e.g., see Kiddushin 41a and Niddah 17a), and indeed in common usage one refers to his wife as rayati (although the term chaver is also applied to one’s wife, see Shabbat 63a). Depending on the exact context, Targum Onkelos sometimes translates ray’ayhu (“his friend”, the third-person possessive form of reyah)into Aramaic as chavrei (his “chaver”) and sometimes as rachamohi (“one who loves him”).

As we have already noted, the root of the word chaver denotes attachment. But what does the root of the word reyah mean? The root REISH-AYIN — ra — usually means “bad” or “evil”. What does that have to do with friendship? The Bible itself already makes a pun on this similarity, roeh kesilim yeiroah (Proverbs 13:20), which means “he who befriends fools will become evil”. Rashi explains that yeiroah does not mean “will become evil,” but actually means “will become broken” (see also Maharsha to Berachot 63a regarding Proverbs 18:24). Indeed, the Talmudic expression kotel rauah means a broken wall, and teruah refers to a series of broken-up sounds which emanate from a Shofar (as opposed to tekiyah which denotes one unbroken note).

In essence, the root of the word reyah means “broken”, but the word reyah also refers to a close friendship, which is a form of connection (just like the word chaver). These two aspects are diametric opposites! It seems that this is yet another example of a phenomenon in the Hebrew language whereby a word can paradoxically carry one meaning and carry the exact opposite meaning, as well. Alternatively, we may suggest that the word reyah implies the idea that your friend’s existence as a separate body is only because he is “broken” apart from you, but is really meant to be attached to you.

Whenever you are contemplating the idea of friendship, you must remember the immortal words of the American poet Ralph Waldo Emerson (1803-1882), “The only way to have a friend is to be one.” Y’all come back now, or as President Bill Clinton famously said, “Shalom Chaver.”