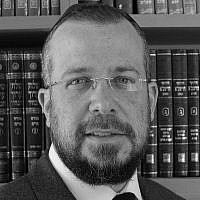 The Blogs
Shimshon HaKohen Nadel
Apply for a Blog
Advertisement
Please note that the posts on The Blogs are contributed by third parties. The opinions, facts and any media content in them are presented solely by the authors, and neither The Times of Israel nor its partners assume any responsibility for them. Please contact us in case of abuse. In case of abuse,
Report this post. 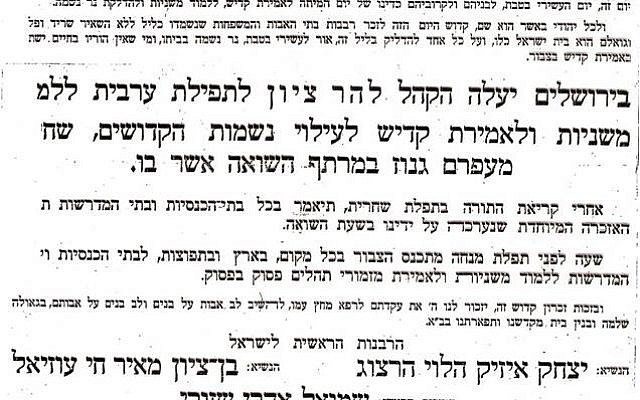 The 27th of Nisan is observed in Israel as Yom Hashoah, a memorial day for the six million Jews who perished in the Holocaust. It also commemorates the strength and resistance shown during that period.

But the very establishment of Yom Hashoah was the subject of much discussion and debate, and was historically met with great opposition by some leading rabbinic authorities.

By 1942, the gravity of the tragedy taking place in Europe reached the shores of pre-State Palestine. In response, Chief Rabbi Yitzchak Herzog enlisted the support of leading rabbis to establish a day of mourning, fasting and prayer. Among those he approached was Rabbi Yitzchak Ze’ev Soloveichik, the ‘Brisker Rav’ also known as ‘Rav Velvel,’ who had himself only recently escaped from Europe, settling in Jerusalem. Rav Velvel was vehemently opposed to adding a new day of mourning and fasting to the Jewish calendar. He reasoned that it is inappropriate – even prohibited – to create a new day of mourning as we already have a national day of mourning, the 9th of Av, which commemorates the destruction of the Holy Temple in Jerusalem and other national calamities and tragedies throughout Jewish history.

In his Teshuvot V’hanhagot (2:721), Rabbi Moshe Shternbuch records the fateful meeting between rabbis Herzog and Soloveitchik: Rav Velvel pointed to Would that my Head Were Water, one of the lamentations traditionally recited on the 9th of Av, which describes the destruction of the German communities of Speyer, Worms, and Mainz during the First Crusades of 1096. In his lamentation, the author, Kalonymous ben Yehudah of Speyer, writes, “…One may not add a time to [commemorate] destruction and inferno… therefore today [the 9th of Av] I will arouse my grief and lament and wail and cry with bitter soul…” The author singles out the 9th of Av as the day to remember a tragedy that took place in the Rhineland, over 1,000 years after the destruction of the Holy Temple! According to Rav Velvel, “it is explicit that even though holy congregations suffered and met cruel deaths, nevertheless they did not institute days of mourning, rather they pushed them off to the 9th of Av, since it is prohibited to establish new days of mourning.”

Other rabbis too would voice similar objections.

When asked about Yom Hashoah, Rabbi Moshe Feinstein responded that it is not permissible to create a new day of mourning (Igrot Moshe, YD 4:57:11), as did Rav Velvel’s nephew, Rabbi Joseph B. Soloveitchik (See Nefesh Harav, p. 197-198).

In an interesting footnote to Israeli history, Prime Minister Menachem Begin would seek to move Yom Hashoah to the 9th of Av following his meeting with Rabbi Soloveitchik in 1977.

Rabbi Avraham Yeshaya Karelitz, the revered Chazon Ish, opposed establishing a fast day to commemorate the Shoah. He explained that we do not have the authority to establish fast days today, as fasts may only be established by the Prophets (Kovetz Igrot 1:97).

But establishing a day of mourning and fasting – in addition to the 9th of Av – is not without precedent. The Shulchan Aruch (Orach Chayim 580:1) lists days “on which tragedies befell our forefathers, and it is proper to fast on them.” Among those listed are tragic events which occurred after the destruction of the Holy Temple.

In response to all of the opposition, Chief Rabbi Herzog pointed to specific communities that had established days of fasting and mourning and even received rabbinic approval (Teshuvot Heichal Yitzchak, Orach Chayim 61). In fact, the communities of Worms and Mainz – the very source for much of the opposition – observed a fast day to commemorate the destruction of their communities during the Crusades! And later, fasts would be established to commemorate the burning of the Talmud in France in 1242 and the Chmielnicki Massacres, which decimated Polish Jewry in the 17th Century (See Magen Avraham, Orach Chayim 580:8).

Some argued that while the 9th of Av is indeed our national day of mourning, some tragedies are so devastating – so monumental – they require their own day of commemoration. That would certainly be the case with the Holocaust. The Slonimer Rebbe, Rabbi Shalom Noach Berezovsky, for example, was deeply pained that a special day was not established to mourn the tragedies of the Shoah (See his Kuntres Haharugah Alecha).

In the early days of Statehood it was proposed that two(!) days be created to commemorate the Holocaust: One day to commemorate the heroism and bravery, which would coincide with the day the Warsaw Ghetto Uprising began, and one day to mourn the tragic events, to be observed on 9th of Av.

But in an attempt to reach a compromise between the secular government and religious community – and in hopes of appeasing some of the opposing rabbis – the Chief Rabbinate established the fast of the 10th of Tevet as Yom Hakaddish Haklali, a day for the recital of Kaddish, the memorial prayer, for those martyrs whose date of death is unknown and those who left no family behind to mourn them. In addition to Kaddish, they decided the day should be observed like a Yahrtzeit, with the lighting of a memorial candle, the recitation of Kel Maleh Rachamim, and the study of Mishna.

Choosing a day to recite Kaddish is also not without precedent. The Magen Avraham (Orach Chayim 568:20, citing the Maharshal), rules that one who does not know the anniversary of his father’s death may choose any day on which to observe the Yahrtzeit.

The choice of the 10th of Tevet was not accidental. By choosing the 10th of Tevet – which commemorates the siege of Jerusalem in 589 BCE by the Babylonian King Nebuchadnezzar, one of ‘Four Fasts’ established by the sages to mourn the destruction of the Holy Temple – the Chief Rabbinate sought to imbue the day with a religious character and quiet those voices who opposed the creation of a ‘new’ memorial day.

During the first Yom Hakaddish Haklali in December of 1949, the remains of thousands of Jews from the Flossenbürg Concentration Camp near Munich were buried together with desecrated Torah scrolls in Jerusalem, and special prayers were recited for the martyrs.

Following much debate, on September 1, 1951, the Knesset passed a resolution establishing the 27th of Nisan as Yom Hashoah U’mered Haghettot. Later, on April 8, 1959, the Knesset passed a law officially establishing Yom Hazikaron La’shoah Ve’lag’vurah, Holocaust and Heroism Remembrance Day, as an annual “commemoration of the disaster which the Nazis and their collaborators brought upon the Jewish people and the acts of heroism and revolt performed.” The law stipulates that the day be observed by a two-minute silence bringing the entire country to a halt, along with memorial gatherings and commemorative events.

Some rabbinic authorities objected to the choice of the month of Nisan, as some customs of mourning are prohibited the entire month because of the holiday of Passover. In addition, some opposed ‘secular’ commemorations like sirens and moments of silence – practices they deemed not be ‘Jewish.’

But with time, Yom Hashoah was accepted by most of Israeli society as a day of reflection and mourning, and today is widely observed.

Rabbi Yechiel Yaakov Weinberg, who himself had survived the horrors of the Holocaust, defended the establishment of Yom Hashoah. In a preface to one of his responsa, he provides a compelling argument for the observance of such a day: “In my opinion it is proper to establish a special day of mourning and remembrance to remember the rabbis and holy Jews who were murdered, butchered, and burned in the sanctification of God’s Holy Name, and to remember on this day the souls of these martyrs. We must do so not just because of the honor due these martyrs alone, but because of future generations that they not forgot what our people lost when the evil, murderous darkness covered over Europe” (Seridei Eish, new edition 1:31).

About the Author
Rabbi Shimshon HaKohen Nadel lives and teaches in Jerusalem, where he serves as rabbi of Har Nof's Kehilat Zichron Yosef and Rosh Kollel of the Sinai Kollel.
Related Topics
Related Posts
Comments