The 28th of Iyar will be forever celebrated for what had happened on that day, in 1967. The day Jerusalem was reunified during the Six-Day War is marked as a day of joy and celebration on which Jews were once again allowed to go to the Western Wall, and the city was reunified as part of the Jewish State of Israel. The day evokes a great deal of emotion—especially for those who lived those events at the time. Yet when thinking of it, one might wonder what is so unique about the day. Though with limitations, Jews were allowed to go to the Western Wall before 1948, which makes you wonder why we celebrate Yom Yerushalayim? Is it merely a celebration of the culmination of a nineteen-year period in which Jews could not go to the Old City of Jerusalem? Of all that has been written about Yom Yerushalayim and its significance, no one has come close to explaining the essence of the day with as much depth and lucidity as the IDF radio transmission. This transmission has changed the world.

It was on the third day of the Six-Day War, the war’s bloodiest battles took place inside and around Jerusalem. More than a quarter of the soldiers who died in the Six-Day War—one hundred and eighty-two—died in the battle over Jerusalem’s old city. After fierce and costly battles, the IDF has captured Ammunition Hill and Augusta Victoria, right outside the old city of Jerusalem. Israel’s decided the city’s sanctity and historic meaning do not allow for air or heavy artillery bombing; the battle would have to be a ground battle.

On June 7th, at 9:30 AM, as Israeli paratroopers, mostly older reserve soldiers, prepared to enter the old city, where they would likely encounter difficult house to house urban combat, suddenly, an electrifying—almost prophetic—voice came on the entire brigade’s radio. It was Motta Gur, commander of the entire Golani brigade, himself born in Jerusalem, with a voice full of confidence, yet shaken and hardly containing the excitement:

“We are sitting on the ridge overlooking ancient Jerusalem. Soon, we are about to go into it. The old city of Jerusalem, which since all generations [Jews] dreamed about and yearned for—we will be the first to enter it. The Jewish nation is awaiting our victory. Am Yisrael—the Jewish people—is waiting for this historic moment. Be proud of yourself, and good luck. Move, move, move to the gate. We will have a roll call on the square at the top [Temple Mount].” 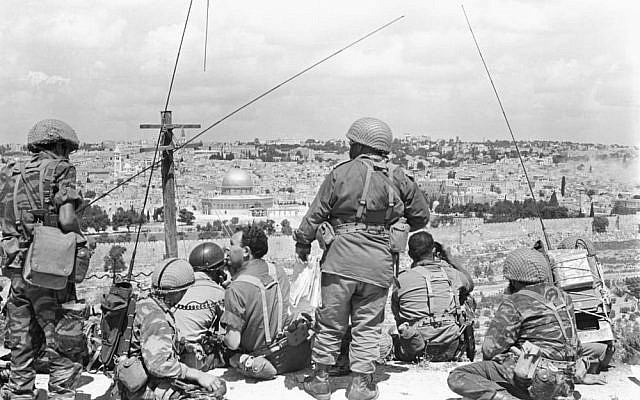 Mota Gur (center with no helmet) with commanding officers in front of the Intercontinental hotel, shortly before entering the old city.
Photo by Amos Zucker, IDF Spokesperson’s Unit / CC BY-SA 3.0

While other commanders on radio gave military banter orders and exchanges, Motta Gur knew he was not speaking to his soldiers, nor was he speaking on behalf of himself. The entirety of Jewish history was speaking through his radio. For the first time in more than 2,000 years, Jews would enter Jerusalem and sovereigns as victors. This was not just a military victory that would give Jews access to the Western Wall; this would return Jewish sovereignty to the same place they have been yearning for, for two thousand years. Walking the streets walked by King David and King Solomon, the prophets, the rabbis, and so many others, as victorious soldiers was history being made.

Of course, Jews were able to go to the Western Wall before 1948’s War of Independence. Yet, they had to rely on the kindness of others to be there. We were like guests in our own home. If the British were not pleased with the way of prayer there, we were restricted. If the Turks did not want us to pray there, we were not able to. Suddenly, the Jewish people were able to go as sovereign in their own state, to the city richest with Jewish history and meaning.

As the brave Israeli soldiers made their way through the streets and alley’s of the old city, Motah Gur made his way down the Kidron Valley, through the Lion’s Gate, Motah Gur ascended with his soldiers up the stairs to the Temple Mount where he got on the radio, and once again made a history broadcast: “Temple Mount is in our hands—Har Habayit Be’Yadenu.” He then added, “all forces, hold your fire,” understanding that once the Temple Mount was taken, the crux of the war was over.

Israeli radio Kol Yisrael had its broadcaster, Refael Amir, coming from another direction, walking with Uzi Narkiss, commander of the Israel Defense Forces units in the Central Region. Narkiss was also born in Jerusalem. As Amir walked down, he made a recording which was broadcasted to all Israelis, and Israeli soldiers, electrifying them and Jews around the world:

“The time is 10:20 [AM], June 7th. At this moment, together with the deputy chief of staff [Yitzchak Rabin] and Central Region Commander [Narkiss], we are going through the Lion’s Gate…”.

After a few moments, with his voice suddenly shaken and chocked with excitement, Amir continued:

In the background, one can hear the voices of ecstatic soldiers saying loudly the blessing of Shehecheyanu “She’hecheyanu ve’kiyemanu, ve’higi’anu lazman hazeh.” Blessed are You, God, who has kept us alive, sustained us, and brought us to this time”. Other soldiers began singing Naomi Shemer’s recently composed song “Yerushalayim Shel Zahav, Jerusalem of gold.” Suddenly, the sound of the Shofar being blown by the IDF’s chief rabbi, Rabbi Shlomo Goren, was heard.

This broadcast became etched into the memory of the Jewish people. Its profundity emanating from the way it addressed every kind of Jew; the acknowledgment that you don’t need to be religious in any way—or give any explaining—for your voice shaking as you see the Kotel for the first time. The trembling and excitement of touching the Kotel for the first time made every person listening feel as if they were there as if they were touching the sacred stones of the Western Wall. The mixture of some soldiers saying the religious blessing of She’hechiyanu, while others sang Yerushalayim Shel Zahav”, the excitement, the sound of the Shofar, all shaped Judaism as we know it to this day.

By virtue of being reunited in this way with this sacred place of prayer and tears, the Jewish people came together. The Western Wall became a place that contains everyone. It is a place etched into the heart of every Jews, from every background. As if with a bolt of lightning, Jews from around the world were electrified with a spiritual awakening. There came a universal feeling of the Kotel being a place every Jew must visit.

This Kol Yisrael radio broadcast transformed the Jewish world to this day and encapsulates what Yom Yerushalayim means to this day. The city of Jerusalem and the Western Wall is not a place for some Jews on some occasions; it is a place for all Jews on all occasions. No matter who you are or what your background maybe when you come to the Western Wall for the first time, your voice trembles. Millions of Jews have visited the Western Wall once again, placing Jerusalem at the center of every Jewish heart—religious and non-religious, young and old, Israeli and non-Israeli. At some point in our lives, we are all that young Kol Yisrael Radio broadcaster, Refael Amir. At some point in our life, we are all going down the steps to the Western Wall and have our voices breaking as we touch the stones of the Kotel.