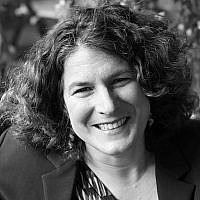 The Blogs
Rebecca Rachmany
Apply for a Blog
Advertisement
Please note that the posts on The Blogs are contributed by third parties. The opinions, facts and any media content in them are presented solely by the authors, and neither The Times of Israel nor its partners assume any responsibility for them. Please contact us in case of abuse. In case of abuse,
Report this post.

Wherever I go, there is a radio announcer, a billboard or a Facebook post, reminding me not to leave my baby in the car.

I know, I know, it’s actually true. But it’s so horrible, I can’t bear to hear it, not every month, not every week, and certainly not every hour. I’m being tortured.

My children wanted a hamster a few years ago. I didn’t want one, because, you know, hamsters have a reputation for doing certain things to their little pink cubs. I couldn’t stand the thought that such a thing would happen in my house.

We got a couple of male hamsters. You know where this story is going. One of them got pregnant, and then she wasn’t pregnant, but we couldn’t find the babies. I was so upset and stressed out. They were only hamster cubs. After a couple of weeks, they emerged from the sawdust, hairy and happy. Phew. I was so upset. Eventually I had to get rid of the hamsters. I just couldn’t bear it.

Now, every hour or so, someone has to remind me that there are human beings who leave their babies to boil in the car. How can that happen????

Last time I was in the US, I went to visit some friends who have a livestock farm. There was a huge sow with 8 piglets and then there was a lone piglet and a lone sow. I asked what had happened. The farmer told me that the lone sow had rolled over and squished the other 7 of hers and he’d only managed to salvage that 1. Guess who was bacon a couple of weeks later?

I am not kidding. Really, I am not.

The only way someone could leave a baby in the car is if they are mentally or emotionally unfit to raise a child. It is so sad, I can’t even be angry at these people. They have something missing in their brain. .

A baby is in your brain more than your right hand is in your brain. If you have ever had a baby, you know what I mean. You are exhausted, groggy, messy, angry and crazy for that first year. But you don’t forget you HAVE one.

Yes, we absolutely have to stop this horrible behavior. Go ahead, punish me with radio messages, billboards, new apps for baby remembering, whatever it is you need to do. But let’s also do something about educating parents, supporting parents, or doing something to identify those people who are unfit to have children, and help them avoid doing so. Some may say that these parents with many children are following the Jewish law. I say there is no Jewish law that says you must have so many children that you can’t even remember that you have them.

About the Author
Rebecca Rachmany is a content marketing professional providing services to numerous high-tech organizations in Israel and internationally; She is active in her religious and local community, with new projects sprouting up around her at least biannually; Rebecca was born in the US and has lived in Israel for 22 years; She takes a stand for equality, safety, and peace for all peoples
Related Topics
Related Posts
Comments