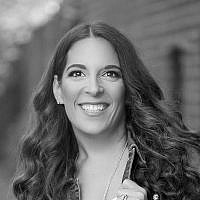 The Blogs
Stefanie Diamond
Apply for a Blog
Advertisement
Please note that the posts on The Blogs are contributed by third parties. The opinions, facts and any media content in them are presented solely by the authors, and neither The Times of Israel nor its partners assume any responsibility for them. Please contact us in case of abuse. In case of abuse,
Report this post.

From the time my kids were little, I made sure they knew I was an ally. Over conversations at the dinner table, in books we read, in current events we discussed, they knew that I felt it was totally ok (and normal, and celebrated) to be gay. It was never one big conversation, but rather something I tried to normalize over many years. Some girls like boys, some girls like girls, some boys like boys. It’s as simple as that. Even in my discussion with friends, before I knew this was personal, before I knew my child was struggling with their own sexuality, before I knew I had a horse in the race, I was an ally. And not just a “sure I support gay people” ally, but a loud, vocal, flag-waving, mama bear ally. Not for my own kid, or my own personal motives, but because it was the right thing to do. (Also because I love rainbows and a good parade.)

We joke that my child is queer because when she was two years old my sister told her she could have two mommies. She got a little confused and thought we were trading her dad in for another mom, or maybe my sister was breaking the news that we were both her moms (my sister did spend a lot of time in our house), but once we explained SHE couldn’t have two mommies, but other people can and do, she said “ok” and continued eating her bowl of Cheerios. Because if we normalize it at a young age, it becomes normal. The same way we normalize heterosexual relationships.

Some of you reading this have gay kids, and many of you don’t know it. You may never know it. Yet according to Gallup, almost 21 percent of Generation Z (young adults born between 1997 and 2003) identifies as LGBTQ. And the trajectory seems to be growing. They may not be out, and maybe your kid doesn’t even know it yet themselves. Many don’t present as what some think as “stereotypically queer” and as well as you know your kids, you may really not see it coming. For those kids, for your friends’ kids, for your kids’ friends, please think of what you say when others can hear you – and even when you think no one can hear.

We should all do good deeds even when no one is watching, right? This is not a new concept. Similarly, do we speak in an accepting way even when we think we cannot be overheard? When someone you know comes out, of course you’ll say the right things TO them, but do you talk ABOUT them at your table in a way that lets your kids know that it’s not only ok but wonderful? Or do you talk about them, even privately to other adults over a cup of coffee or a glass of wine, in a way that if kids overhear you they’ll retreat deeper into the closet? Kids have ears, very big ones, and usually hear everything you don’t want them to.

I’ve heard the conversations. My kids have heard them. They came from well-meaning people, self-proclaimed allies even, who didn’t know who was listening. I’ve heard “OMG, did you hear so and so is gay, that’s crazy” or “transgender people just want to make a statement. You cannot become a different gender than you were born” or “I feel so bad for so-and-so’s parents, it must be so hard to have a gay kid.” I’ve heard all of these. At Shabbat tables, at shul kiddush, at friends’ bar mitzvahs. From people who didn’t know the wrong ears were listening. Ears of gay kids. Ears of siblings and parents of gay kids. Ears of kids who have transgender friends. But it should not matter.

Our child was lucky to be born to parents who celebrated her unconditionally. She was lucky to have parents who she never worried would question whether it was a phase, or tell her she’s too young to know. Or to pretend she was not who she was. She was lucky that she was able to come out at 15. Too many of our kids aren’t as lucky. They sit closeted for years because their parents never told them it was ok for people to be gay.

Because books with LGBTQ characters were never brought into their homes (yet the great Disney happily ever after kiss is shown time and again through countless Disney classics.) Because they overhear parents talking about the boys in the ballet class, or the lead in the school play and using the word gay as derogatory. Because as a first grader they asked their parents what gay means their parents said “it’s not appropriate for your age” or they just ignore the question and switch topics completely. Because as teens their parents said, “We do not watch movies about gay kids” when asked to watch Love, Simon. Because instead of saying “the person you’ll marry” or “your spouse/partner” we decide for them at a very early age which gender that person will be and say “your wife/husband” assuming everyone is naturally heterosexual.

For these reasons and so many more, our kids sit closeted. For these reasons and so many more, one in four LGBTQ teens attempted suicide in the first half of last year. Sit with that number for a moment. 1 in 4.  I personally know dozens of LGBTQ kids in my local community Jewish day schools, our local yeshivas, our shuls (and I guarantee there are dozens more I do not know). And staying silent, or not actively being an ally, is only harming them.

Kids are not queer because their parents read them a book where the main character had two dads. Or because they were exposed to art and theater, or enrolled in a ballet class. They’re not queer because their families spoke about gay rights at the Shabbat dinner table. My daughter isn’t queer because Love, Simon was the choice for our family movie night (though it sure helped our discussion a few months later). But those who are queer need to know they are loved and accepted – well before they come out – and that comes from home at an early age.

When our kids are sad we let them know it’s ok to cry. When they roll an ankle, we tell them it’s ok to sit out an inning and then get back out there. Too many parents never think to say that it’s ok to be gay. I’ve heard, “Well my kid isn’t gay, so I’ve never said it’s ok to be gay,” which is absolutely not acceptable. It simply does not matter. First of all, you don’t know they’re not gay. You don’t know their friends aren’t gay. You don’t know who is so deep in the closet they’ll never feel free to come out. It doesn’t matter. Maybe they are in fact straight but they have a friend who is struggling, who confides in your kid, and because your kid knows it’s ok, your kid is able to be the friend they really need. And that friend can come to your house because it’s a safe space.

As parents, we work to create healthy environments and safe spaces for our children. Let’s all remember to add normalizing our LGBTQ community members, kids, and friends, and helping to create more safe spaces. It’s more than flag-waving and calling ourselves allies. It’s being actively inclusive, changing the heteronormative language in our homes, and being cognizant and measured in our speech not just in June, but every single day.

About the Author
Stefanie Diamond of Teaneck, NJ is a mother of three and wife (of one); she is a photographer specializing in newborn, child, and family portraits. She is a member of both Shaare Tefillah and Beth Sholom congregations and a member of Eshel, a nonprofit organization that creates community and acceptance for lesbian, gay, bisexual, and transgender Jews and their families in Orthodox Jewish communities.
Related Topics
Related Posts
Comments