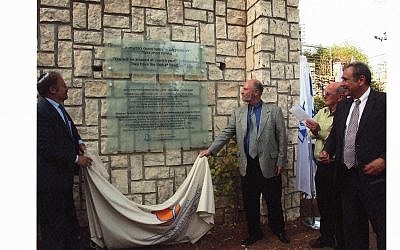 It was late in 1945. Stephen Norman, a Captain in Britain’s Royal Artillery, was on his way to London for discharge.  He had a few extra days. He made a quick decision to visit Palestine.  His grandfather had been a Zionist. His parents wanted little to do with his grandfather’s crazy, failed dreams. But, as the war unfolded, Stephen learned about Zionism, his grandfather and the dream. He became a Zionist.

It was a short air-hop from Cairo to Tel-Aviv.  Stephen caught a ride into the city.  He walked the streets and was amazed at what he saw.  Jewish children, strong, healthy, smiling, not like the fearful, gray, cowering skeletons he had seen in Europe, played in the sunshine.

On his way back to Britain Stephen wrote in his diary, “You will be amazed at the Jewish youth in Palestine.  They have the look of freedom.”

Stephen expressed his soul, “when you come to Palestine you are reborn a bit.  When you leave, you die a bit.  I will return”.  He never returned in life.

Chaim Weizmann helped Stephen get a small job at the British Embassy in Washington, D.C.  One overcast November day in 1946, Stephen walked along the Massachusetts Ave. bridge.  Stephen was depressed.  He was the last Herzl, his people, the Jewish people, languished in European post war concentration camps.  The world did not want the Jew anywhere.  He was the last Herzl and he could not do anything to help.

He stopped walking about halfway across the bridge.  Neatly hanging his tweed jacket on the rail, Stephen jumped over the railing plunging to his death 90’ below.  The Washington Jewish community buried him.  A flag of the future State covered his casket.

Stephen died barely 18 months from the liberation of the death camps and 18 months before the birth of the modern State of Israel – Israel the Jewish State, the only State in the world that wanted Jews. He could not see through the morning mist.

Stephen’s place of death was ironic.  Years later, the British embassy built their embassy at the north end of the bridge.  The Washington, D.C. Islamic Mosque and Cultural Center was built as the southern end.  Stephen, the Jew, the last Herzl, was symbolically trapped between the heartlessness of the British and the intransigence of the Arab world.

Despite incredible odds, it was an American Jew who brought Stephen home to rest in the land of his fathers, as Rabbi Amar wrote.

After a bitter, ten-year struggle against Zionist sclerosis and cynicism, Stephen Norman’s long forgotten and abandoned remains were brought home to Israel.  He was buried in the plot for Zionist leaders on Mt. Herzl.  All the graves of his family are symmetrically placed except his.  His grave is at the end and off center.  The Jewish Agency did not plan on his return.  They did not even know he had existed.  December 2007, the Zionist came home.

On Mt. Herzl is the only memorial in the world that is not for Theodor Herzl.  It is the Stephen Norman garden.  It is the only place on Mt. Herzl that has a place, even a tiny place, for students, tourist groups, soldiers and visitors to meet, sit quietly in lectures and contemplate the meaning of Israel.

On the wall of the garden is Stephen’s quote from those many years ago.  “You will be amazed at the Jewish youth in Palestine.  They have the look of freedom.”

With 16 simple words Stephen summarized the why of Israel.  Stephen’s words were then and remain today a radical statement – Freedom for the Jewish People.

American Jews are self-immolating, replacing Judaism with their new God, Tikkun Olam-ism. Tragically, thinking it a universal good, American Jews and even Israeli Jews are separating their souls from the Jewish people and Jewish National survival centered in a very tiny Jewish country.

The Nation-State- Law, at its core from the founding of Zionism, never denied or denies the rights of non-Jews to live in the Jewish State.  Justice is Jewish.  Jewish National self-destruction is not just nor is it justice.