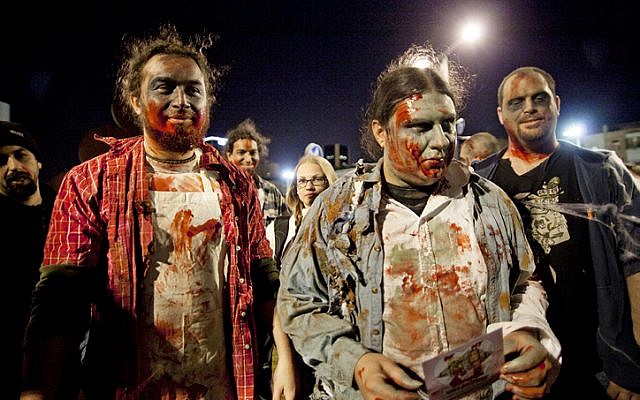 I was watching a preview to a TV show that depicted yet another version of a dystopian future that is waiting just around the corner. In this particular case the problem was the exhaustion of fossil fuels and technologies that ultimately made the entire planet unstable. I cannot blame people for watching such movies and coming to the conclusion that it is really just a matter of time until Terminators along with angry divine Angels corrupt our Earth’s core and send us spiraling into a dying sun. And this scenario would actually be a “cup half full” version based on the movies that we have seen and will see. And please, don’t get me started on zombies who are the result of a batch of measles vaccine that went bad [if this last comment offended you, then actually I achieved my purpose].

No one knows the future. I have openly stated that any prediction beyond three years is a total gamble. There are literally days when an announcement is made which fundamentally changes our day-to-day life. To predict whether we will exhaust fossil fuels and totally destroy our planet, is meaningless. However, it is still fair to extrapolate from our present situation and try to set boundaries on likelihood of various outcomes.

For example, I know that no one wants a nuclear reactor in their backyard. But way before we start digging deep into our own planet’s core triggering earthquakes that are 10 on the Richter scale, we could simply build lots of nuclear reactors that would fuel our needs very comfortably and yes, very safely. Why don’t we have more nuclear reactors today? Why are we frakking against the will of so many people, when a few rods of radioactive material could power our computers and everything else around us? Because nobody wants a nuclear reactor in their backyard. But if we really are on the cusp of exhausting our fossil fuels and destabilizing our atmosphere, I think we will all have to rethink the cost benefits of nuclear power. Of course, this is assuming that we do not discover a viable mechanism for fusion. Nuclear fusion would allow us to generate clean energy, in the same way that our sun does. In the movie “Back to the Future”, the professor had a “Mr. fusion” on the DeLorean–Time Machine. As funny as this moment in the movie was, it is far more likely than our world imploding like Krypton.

In a beautiful demonstration from a major technology meeting, the developers discussed their new approach to recapturing energy from “thin air”. In reality, we are surrounded by invisible energy waves that are just now becoming the targets of various devices for recapturing previously spent energy. In a previous blog post I spoke about the possibility of capturing all types of “lost” energy and then reusing it. Such approaches can drastically reduce our demand for fossil fuels and thus our carbon footprint and all that comes along with it. Considering that the financial pundits actually expect the cost of oil to continue to drop due to its abundance and a worldwide awareness of the need to decrease demand, it once again seems unlikely that our futures will be as dark and horrifying as so many directors depict them.

There is nothing wrong with letting our imaginations run wild when depicting major events in fantasy novels and other media. One only needs to look at the spate of Marvel movies to wonder why anyone even bothers rebuilding New York, since it seems to be repeatedly torn down every time an intergalactic villain visits us. The problem is that people have started to truly internalize this imagery to such a point that they fear for their own lives and those of their children, from events that are extremely unlikely to occur. When Ebola first presented in North America, it was legitimate to be concerned, and even somewhat frightened. But the mass hysteria was totally out of place and completely out of proportion to the real risk from this disease. It doesn’t matter if a particular disease has a 10% mortality rate (such as Flu in the very old and sick) and affects 1 million people, or 100% mortality rate and affects 100,000 people. For those who spent their time in the washroom during math class, in both cases, the absolute mortality rate is 100,000 people. Like pregnancy, you can’t be half dead unless you are planning to storm the castle in “the Princess bride”.

Our futures are actually extremely promising and wonderfully bright. The dystopia that we can expect is one in which people no longer die of disease or hunger. We may even experience in our lifetimes the end of war as it becomes more and more futile to fight over resources that have become easily producible via various technologies. I personally look at my life living in Israel with my supermodel wife and amazing children and find it hard to imagine that a divine heaven could be any more glorious.

No one in the near future for sure, will walk alone. We will be constantly observed by various devices that ensure our safety and health. We will know that even in desperate times halfway across the world, we will not only be immediately identifiable and locatable, but also have immediate access to acute medical care [which would have saved countless lives in Nepal].

I personally think that the time is come for everyone to take a step back and appreciate how positive our present-day situation is. Are we facing possible war with Iran, that could even turn nuclear? Definitely. But when the day comes, hopefully in the near future, when we have a defensive shield program that can knock ICBMs out of the sky, such a threat from our neighbors will be far less significant.

I actually am an optimist. I continue to marvel at the wonders of the human spirit and the lack of limits of the human mind. And when all is said and done, I think it best to dream of a better future than worry about a potentially horrible present.