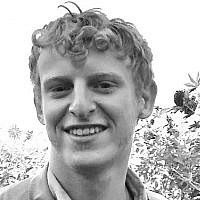 The Blogs
Guy Domb
Apply for a Blog
Please note that the posts on The Blogs are contributed by third parties. The opinions, facts and any media content in them are presented solely by the authors, and neither The Times of Israel nor its partners assume any responsibility for them. Please contact us in case of abuse. In case of abuse,
Report this post.

Last week I attended a talk with Merphie Bubis of Breaking the Silence organised by my Jewish Society in partnership with Yachad, at Manchester University. Bubis, who served in the IDF for two years, shared with us experiences from her military service as well as testimonies given by other former soldiers to the Israeli NGO Breaking the Silence. This organisation of former soldiers collects and publishes testimonies about the mundane, day-to-day reality in the occupied territories.

The students who attended this educational event, myself included, welcomed the opportunity to learn about the military occupation of the West Bank from Israeli soldiers who experienced it first hand. The purpose of the talk was to recount the experiences of former IDF soldiers who themselves have experienced and played a role in maintaining the occupation in order that Jews in the diaspora could better understand the effects of it, on both Palestinians and Israelis. Unfortunately, the Co-Chair of North West Friends of Israel, Raphi Bloom, considers these former-soldiers as a threat, and so – despite the fact he probably graduated many years ago – decided to attend this student event himself. Following the event, he unleashed a torrent of criticism, grossly misrepresenting the purpose of the talk and what was said.

The fact that the co-chair of North West Friends of Israel came unannounced and uninvited to a student talk and claims to have also recorded it without telling anyone, explains why organisations like Yachad are becoming ever more popular amongst the next-generation whilst organisations like NWFOI are declining. Young Jewish students who want to see peace in Israel-Palestine make an effort to learn about the many complex issues that impact the region, including the occupation. And while young people engage in difficult conversations about the occupation because they want it to end, it seems Bloom and his colleagues are more interested in bullying us into silence, so our conversations about the occupation will end instead. That’s why organisations that deny the occupation’s existence and are hostile to anyone who tries to talk about it, just drive young Jews further away from Israel, not closer.

Bloom accuses BtS of being disingenuous, but the truth is it is Bloom and NWFOI who struggle to have a genuine conversation about the reality of occupation. Bloom accuses Bubis of telling a “shocking lie” about an incident which took place in 2014 where settlers of the Esh Kodesh outpost attacked Palestinian residents of the village of Qusra. This story which Bloom claims is “not backed up by newspaper reports at the time” was covered in real time by major Israeli newspapers including Yedioth Ahronoth and Haaretz. It looks like Bloom is the one who needs to do his homework properly before lecturing former soldiers about their lack of knowledge about the occupation.

Bloom’s account of the talk would suggest that he struggled to understand the complexities and nuance in Merphie’s testimony. He claimed in bold that Merphie stated that ‘most settlers are religious and that they refuse to condemn settler vandalism carried out against Palestinians on Shabbat.’ But this is flat out untrue. Merphie clearly stated that there are multiple reasons for which people decide to settle and did not make a statement which would imply that the majority of settlers refused to condemn the attack. His claim that Merphie stated very clearly that ‘the IDF has a policy to shoot Palestinian youth who are running away’ is simply not the case. She actually said that there seems to be a conflation of policies on different occasions regarding what to do with Palestinians who attempt to escape, which can, on occasion, lead to soldiers opening fire on escapees. The example she gave was the case of Col. Israel Shomer who shot dead 17-year-old Mohammed Ali al-Kasbeh at 2015 after the teen hurled a stone at Shomer’s vehicle. At the Q&A at the end, Bloom proceeded to aggressively and patronisingly ask Merphie to clarify this point, which she did, as he continued to speak over her and attempt to twist her words. Bloom went on to claim that ‘Had she not been challenged the audience would have been left believing that the IDF as a rule shoots Palestinians running away in the back!’ yet having spoken to multiple students who attended the event, it seems that Bloom is the sole person who managed to conjure this interpretation of her words.

The fact that Bloom suggests that the occupied territories are considered be disputed territories by many people highlights his unwillingness to properly engage with what was being said. This is actually a position held by a minority of people who seek to uphold and justify a 51-year occupation. He relies on misleading legal terms and facts to deny the events that are occurring in the West Bank. He says that the vast majority of Palestinians live under the Palestinian authority which is true, but then conveniently omits that the IDF is still allowed to enter into Area A of the West Bank. He ignores the fact that due to massive population growth there is increasingly a lack of land suitable for Palestinians to move into. This is hardly surprising given that between 2010 and 2014 only 1.5% of planning applications by Palestinians were accepted in Area C.

The title of Bloom’s article ‘The Enemy From Within’ describes the non-violent activists who, unlike Bloom, served in the occupied territories and put their lives on the line to protect their country. Now, these former soldiers are still fighting to serve their country, and are doing so as citizens of Israel who wish the country to end the occupation which they believe is endangering Israel’s existence as a Jewish and democratic state. As a self-described supporter of Israel, for Bloom to describe former IDF soldiers as Israel’s ‘enemy from within’, and imply that young Jewish Zionists in the UK are also enemies by association, beggars belief. It seems that, according to Bloom’s world view, young Jews can either support his vision of Israel, or be branded as friends of enemies of Israel.

About the Author
Guy is a second year History Student at the University of Manchester, and student activist at Yachad from London.
Comments