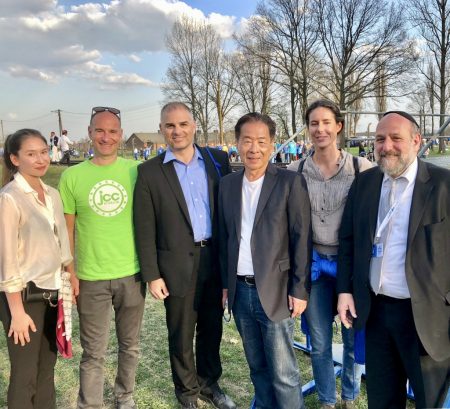 A chance encounter at this year’s March of the Living had a profound impact on me this week. I met the son of the person who saved my grandfather’s life.

“Whoever saves one life it is as if they saved an entire world’. This Talmudic statement is widely known and used quite often in the Jewish discourse. There is, however, a first half of the statement which when put together with the first describes my experiences this past week in Krakow during the March of the Living. The Mishna in Sanhedrin asks why Man is created alone, not as part of a whole group. It responds: ‘to teach us that a person who erases one soul it is as if he destroyed an entire world; a person who saves one life it is as if he saves an entire world’.

The value of one soul, that is the message I learn from this text and it had particular importance for me. This past week saw close to 15,000 Jews as well as foreign dignitaries and Poles visiting Krakow and, ultimately, Auschwitz/Birkenau for the 30th annual March of the Living. My wife, Hadley, came to join me and we shared this emotionally draining yet inspiring day together with Jewish Federations, Synagogues and many, many young adults. 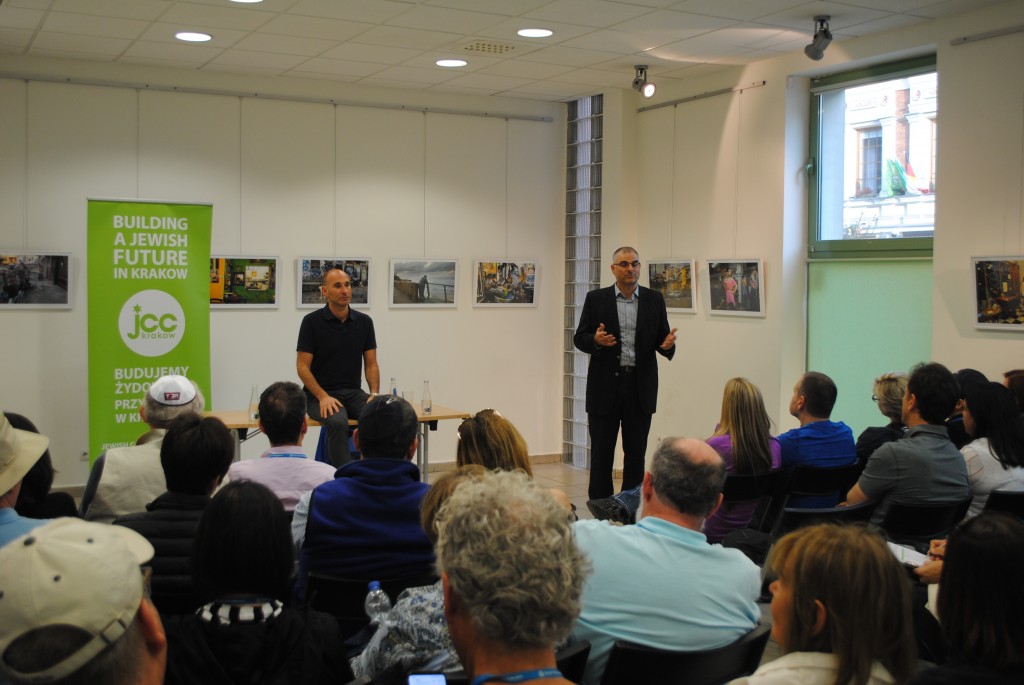 Before and after the march visitors had a chance to come to JCC Krakow and learn about Jewish life which has been miraculously revitalised over the last 25 years and especially in the last 10 since the JCC opened. We told each group that while they came primarily to commemorate the past, to make sure ‘no single soul loses their name’, in Krakow they also have a chance to learn about the steps being taken to ‘save one soul and save an entire world’.

Sometimes we introduced to our guests young Polish Jews who only recently discovered their Jewish roots, either through the revelation by a relative or their own research. It is so inspiring to see these young Poles find their way back to Judaism and proudly join the Jewish community in Krakow. 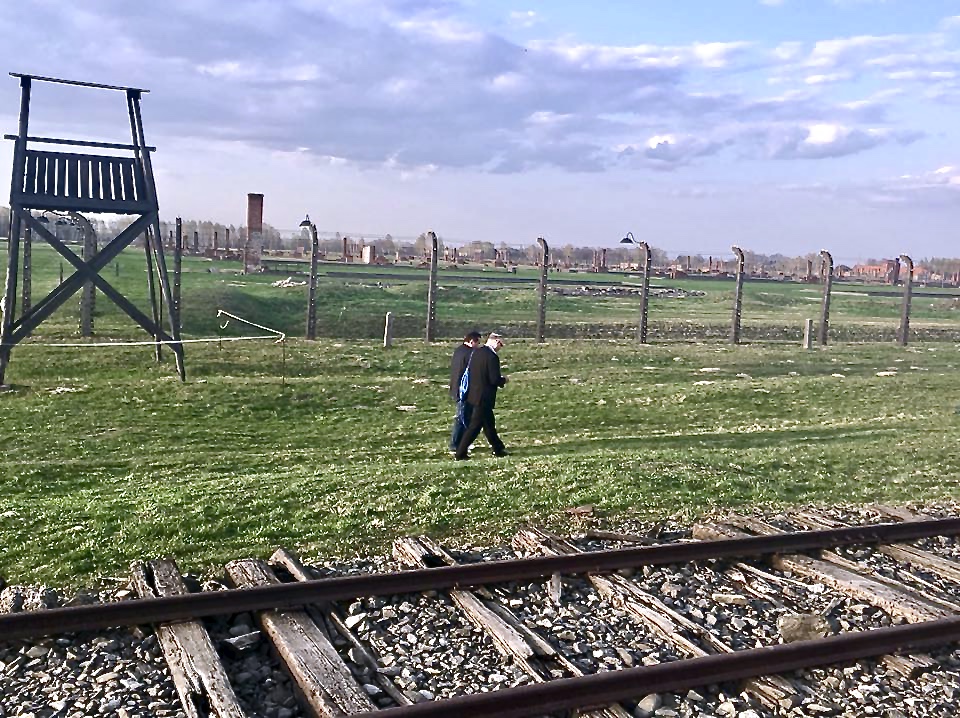 But after the March the message became more personal and the notion of ‘saving one soul’ really hit home. My grandfather, Mr. Joseph Ganger, was born in Vienna but before the war he was studying in a Yeshiva in Bielsko Biała. His parents came from Krakow and Podgórze. 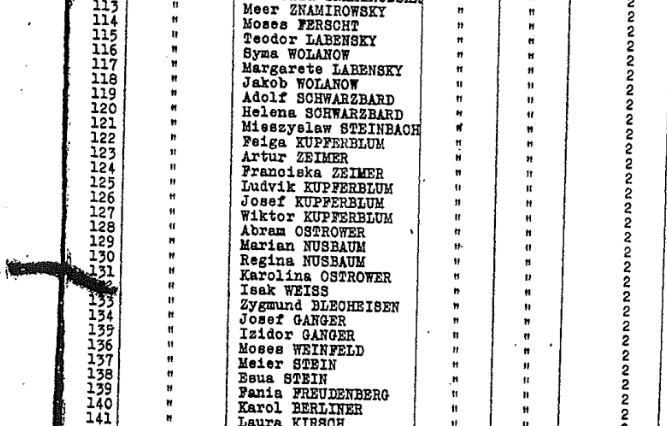 The Sugihara list where Mr. Joseph Ganger and his father Izidor appear.

In 1941, he received a visa from Chiune Sugihara (the Vice Consul of the Japanese Empire in Lithuania at the time) for Japan which together with his visa to Curacao would get him (and at least 2200 other Jews free passage across Russia to Japan. From lower Poland reaching the Trans-Siberian railroad and then Kobe Japan (and ultimately receiving another visa to Shanghai with the Mirrer Yeshiva), my grandfather and his parents survived the war. 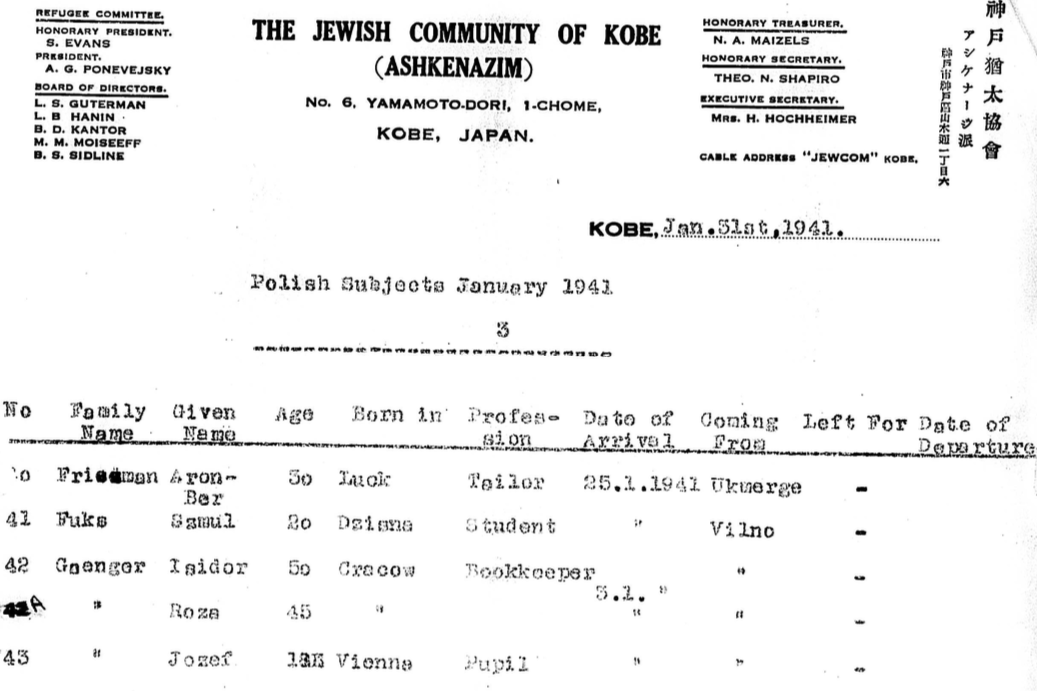 Sugihara at the time was defying orders from Japan, but understood that with every visa he issued another Jewish life is saved. He had no idea of the tens of thousands of Jewish souls which would emerge a few generations later, he simply did what was right. 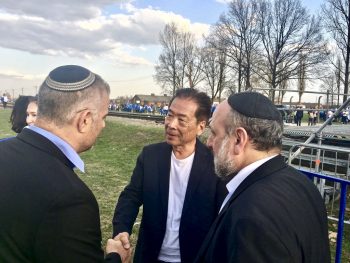 Fast-forward 77 years, and I hear at the March of the Living ceremony that the family of Sugihara was being honoured for their role in saving Jewish lives. I went up to Nobuki (the son) and said words which these days are quite rare to be uttered, “your father is the reason that I am alive today!) I then took a picture together with Sugihara’s granddaughter, Haruka. 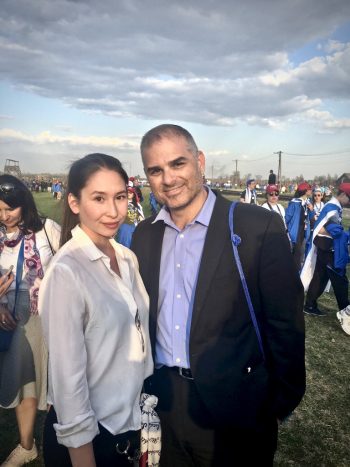 Chiune (Sempo) Sugihara was once asked why he risked disobeying Japan to save all the Jews. His response, “The spirit of humanity…philanthropy…and neighbourly friendship. With this spirit I ventured to do what I did, confronting this most difficult situation. and because of this reason I went ahead with redoubled courage”. In so doing he game me and tens of thousands of Jews life. It is only right that in addition to owing him and his family a debt of gratitude, we also continue his valiant mission and enhance humanity, engage in philanthropy and show friendship to those around us.

I have the opportunity to give of myself to help Jews and non-Jews in Krakow. I hope I will be successful in helping my brothers and sisters find their way home as well as offering friendship to all those who live in Krakow, letting them know that the spirit of Sugihara gives us redoubled courage to conquer fear, xenophobia, and complacency and build a better life for us all.