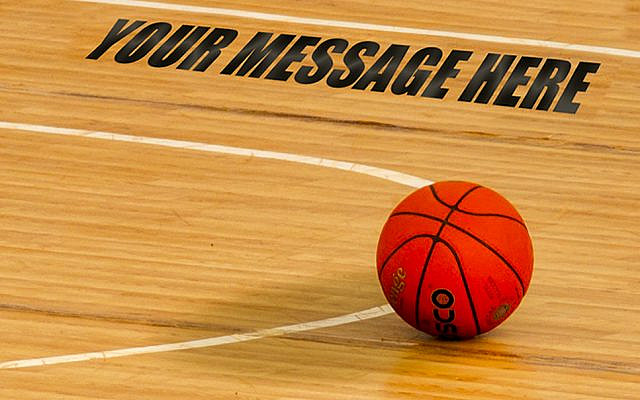 While watching the Los Angeles Lakers – Portland Trailblazers National Basketball Association playoff game, my attention was drawn to the “BLACK LIVES MATTER” message boldly painted at midcourt on the shiny hardwood floor. While the huge, agile athletes flew by, TV sports fans were reminded of an American social justice struggle challenging our society.

The underlying declaration that Black lives matter is righteous, it reflects an historic reality, it is a continuing struggle and it is a national aspiration. Unfortunately, behind the BLM organization is malign, anti-Semitic  leadership with demonstrations-marches-riots where anti-Jewish hate has been recorded: “Israel, we know you, you murder children, too,” “Death to Israel,” “Death to America” and “From Gaza to Minnesota”, “Globalize the Intifada.”

I tried to recall another similar social justice issue framed in a single, dramatic, iconic phrase. Finally, and after the Lakers won, another example, relevant to Jews and Israel, occurred to me.

In the aftermath of the Holocaust, “NEVER AGAIN” became the gritty personal and geopolitical commitment to prevent a repeat of this unmatched crime against humanity. It was a commitment to six million murdered souls. And, yes, NEVER AGAIN was a declaration to the world that Jewish lives matter. Remember that only now in 2020 has the world’s Jewish population returned to the pre-Holocaust 1938 tally.

Unfortunately, NEVER AGAIN has been universalized and applied to other more trivial contexts, but its power derives from the Jew’s helplessness, victimization and pain. I grimace knowing it marginalizes the dimension of the Jewish Holocaust tragedy. And, no, NEVER AGAIN is not displayed on the Ligat HaAl (Israeli Basketball League) hardwood courts.

For Israel, over the past seventy-two years, her miraculous creation, successful defense and building has created the reality of a people and a military that can ensure that “it” would NEVER AGAIN happen. It is this resilient, strong Israel that is now the safe haven for Jews that fulfills Herzl’s dream. All Israel Defense Forces soldiers solemnly pledge, with a gun in one hand and a bible in the other, that there will NEVER AGAIN be another Masada, Inquisition or Auschwitz.

In Europe, the NEVER AGAIN commitment seems less assured. France and Britain, the third and fifth largest Jewish populations, have seen recent governments flirt with openly anti-Semitic leadership candidates. Their continuing Aliyah outflows, due to the rise in anti-Semitic acts and the need for police protection of Jewish institutions, reflect their precarious situation. It may be that their European NEVER AGAIN solution is abandoning the diasporic enclaves in favor of Israel or the United States.

In America, with a Jewish population of now only 2%, the NEVER AGAIN report card is more complex. First, the reality of assimilation, with over 50% intermarriage, low birth rates and diminishing Jewish-Israel identity may doom Jews to irrelevance over the long term. And therefore, the passionate swearing of NEVER AGAIN edges to become a hollow catchphrase.

Second, the cocktail of recently constructed intersectionality social justice “principles” and an unfocused Tikkun Olam mandate dilutes what is practically needed to sustain a focus on a Jewish mindset and cultural identity. These convoluted post-modern themes are reinforced by the media and our educational institutions. The increasing frequency and virulence of anti-Israel campus demonstrations reflect these dangerous trends.

Third, from a political standpoint, it is a fact that the great majority of Jews identify with the Democrat party.  At the recent Democratic National Convention, while the official platform again avoided any anti-Israel planks and both Biden and Harris have Jewish family, there were other troubling occurrences. Linda Sarsour, a rabid anti-Semite, was invited to “virtual” attendance as was Imam Noman Hussain who took part in the convention’s “Interfaith Welcome Service.“ Hussain,  a scholar at the Texas-based Qalam Institute, according to the Middle East Forum, calls for “the use of female sex slaves, the killing of adulterers, and incite hatred against Jews and other non-Muslims.” With the growing influence in Congress of “The Squad” pressing their Jew-hatred and Anti-Israel agenda, we need to encourage party leadership to clearly condemn their behavior.

It is appropriate to note that the largest pro-Israel organization in American is, by far, Christians United For Israel (CUFI). With their over eight million members, it is an important ally of American Israel Public Affairs Committee (AIPAC) and it is larger than the entire American Jewish community. Gratefully, CUFI works very hard to help ensure the Israel-America alliance remains a strategic cornerstone against Islamic and communist threats.

In the upcoming 2020 elections, the defunding of police and the anti-nationalism themes also bode poorly for Jews and Israel. With the rise (tripling from 2013 to 2019) in anti-Semitic acts, the need for stronger police presence is obvious. The self-deprecative anti-nationalism imposes a no-win absolutist standard on America’s history and behavior, and it can’t help but lead to a naïve universalism. By extension, Israel with her particularist Jewish democracy would be castigated.

BLACK LIVES MATTER is a powerful communications tool and one we can all hope leads to a still better version of America. Sadly, both Left and Right fringes are stoking civil unrest that may be difficult to reign in, and it remains to be seen who succumbs to the mob. With the swirl of hyperbolic political rhetoric stoking a hotly contested election, Jews need to remember the NEVER AGAIN lessons taught on the streets of Munich and Kishinev.

This time… stand up and get involved.