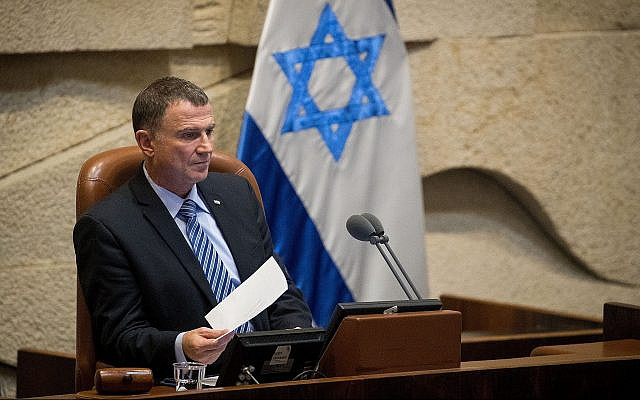 The speaker of the Knesset, Yuli Edelstein, faces an unenviable dilemma: whether to prevent the formation of a House Committee to deal with Benjamin Netanyahu’s request for immunity in defiance of the opinion of his own legal advisor, Eyal Yinon, or to permit the convening of the committee at this juncture, and garner the wrath of his own party. Whatever he decides, he will be damned if he does and damned if he doesn’t. The issue, therefore, is not about the speaker’s personal considerations — although these will undoubtedly come into play — but about the meaning of his ruling on the standing and independence of Israel’s parliament.

The Knesset as an institution has lost much of its luster in the eyes of the public in recent years, deemed in successive polls to be one of the least popular public bodies — second only to political parties. Its position has eroded even more during the past year when, following two elections and successive failed attempts to form a new ruling coalition, it has become an extended arm of a non-elected caretaker government. The issue of how the Knesset deals with the request of a majority of its members to begin deliberations on Netanyahu’s petition for immunity consequently has a direct bearing not only on the interim Prime Minister’s political future, but also — and far more significantly — on the fate of the structure of Israel’s parliamentary democracy.

If Yuli Edelstein is truly committed to safeguarding the role of the Knesset, he has no choice but to allow the immunity proceedings to begin forthwith. Any further foot-dragging threatens to undermine what is left of the institutional autonomy of Israel’s legislature, to perpetuate its paralysis and to undermine its sovereignty.

The background to the present conundrum is well-known. On November 21, 2019, the attorney general announced that he intended to press charges against Netanyahu on three counts of fraud and breach of trust and one count of bribery in three separate cases. The indictment was immediately brought to the attention of the speaker of the Knesset as required by law and was then re-submitted with a list of witnesses and the name of the adjudicating court (The Jerusalem District Court) on December 2, 2019. In accordance with the “Immunity Law of Members of the Knesset,” as amended in 2005, a member of Knesset has 30 days from this announcement to ask for parliamentary immunity; if no such request is presented, then the authorities may proceed with the submission of formal charges to the court.

Benjamin Netanyahu pondered his alternatives until the very last minute. On the evening of January 1, 2020, just before the midnight deadline, he announced that he is submitting a request to invoke his immunity, knowing full well that no House Committee — the only body able by law to adjudicate such a request — had been constituted and that the Knesset had already dispersed, in anticipation of a third round of elections set for March 2, 2020.

Politicians and observers immediately interpreted this move as yet another attempt to delay the judicial proceedings against the outgoing prime minister, despite the fact that a majority of the public — in a series of public opinion polls — opposed such an appeal. He presented two justifications for his decision. The first: that he has no intention of bypassing the judicial process, but of allowing the “people” — presumably the voting public — the right to decide the identity of their future leader at the ballot box. In his view, the outcome of the elections trumps any formal move by Ministry of Justice technocrats and other enforcement agencies at this time. The second: that his demand to invoke his parliamentary immunity was only a time-bound move and that, in due course, he intended to stand trial like any other citizen (erroneously stating that “immunity is always temporary” when in fact only procedural immunity lapses with the end of the tenure of the granting Knesset).

Netanyahu’s request, besides standing in direct contradiction to past assurances that he has no intention of asking for such protection, was based on the assumption that, public criticism notwithstanding, he would thereby be able to ensure a delay of prosecution of the cases against him at least until the next Knesset was sworn in, a new government formed, a permanent House Committee established, and a full discussion on the immunity petition taken place (which he indicated would involve calling an array of witnesses and hence could be prolonged). In his formal petition, he also went further, indicating that he would also claim substantive immunity, which, if granted, has no expiration date.

The Knesset’s legal adviser has now completely undermined this assumption by ruling that there is no legal obstacle to appointing a House Committee and initiating immunity deliberations tomorrow. In the opinion he handed down on Sunday, he indicated that while such a move would be considered irregular, it could easily be defended in light of the provision in the immunity law that proceedings on requests for immunity be dealt with “as soon as possible.”

Thus, what the caretaker prime minister did not take into account — despite his astute sense of political timing — was that a House Committee could be formed and complete its immunity deliberations during the tenure of the current Knesset. In such an eventuality, the Knesset could either deny his request (a majority in the 22nd Knesset has already declared that it intends to do exactly that), allowing the attorney general to file the indictment and begin the judicial proceedings immediately or, alternatively, support the invocation of immunity which would lapse automatically with the swearing-in of the 23rd Knesset within 14 days of the early March ballot. Under both these circumstances, beyond the political damage already wrought by the claim for immunity in defiance of public opinion and past promises, the prime minister stands to gain very little — if at all — by recourse to this strategy.

Only one person stands today between Netanyahu and such a fate: the speaker of the Knesset. Once the Knesset has dispersed, he alone has the power to permit the convening of the two existing committees (Foreign Affairs and Finance) and of the Arrangements Committee, which according to paragraph 2A of the Knesset Law of 1994, is responsible for many of the tasks of the permanent House Committee — but not issues related to parliamentary immunity. No such committee can be formed except by the decision of the Arrangements Committee.

Edelstein thus finds himself between the devil and the deep blue sea. Should he prohibit the convening of the Arrangements Committee and the appointment of a House Committee, he would be defying the will of the majority of the members of the Knesset. Should he permit such a move, he can say goodbye to Likud backing for his bid to become the next president of Israel. He does not have the luxury of avoiding a decision on the matter, pressing home the adage that although much of politics is about timing, not all politics is subject to temporal considerations.

Benjamin Netanyahu’s obstinate clinging to power has already wrought untold damage to Israel’s tottering democracy. His last-gasp delaying tactics around the immunity question now threaten to hopelessly entangle what is left of the integrity of the country’s only truly representative institution. The question is neither merely political nor technical; it has everything to do with the preservation of Israel’s form of government. If the speaker of the Knesset, caught in the throes of an impossible dilemma, does not stand firmly behind the institution he heads, he will be responsible for its effective disintegration, leaving the country totally hostage to the whims of an indicted prime minister determined at all costs to avoid public accountability.