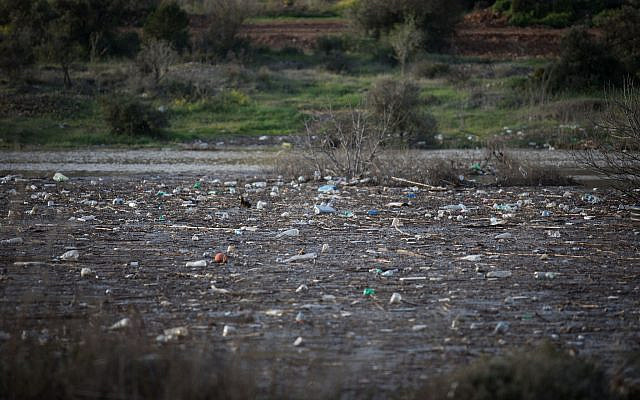 Illustrative. Plastic bottles and other trash in the Beit Zait water reservoir near Jerusalem, on March 1, 2019. (Hadas Parush/Flash90)

Last week, Israel’s Minister of Environmental Protection, Ze’ev Elkin appeared in the Environment 2050 conference that convened in Tel Aviv. Elkin was invited to expound on his environmental vision for the coming 30 years. To the surprise of hundreds of conference participants, Elkin chose not to address the topic of the gathering, but rather to settle scores with environmental organizations, condemning what he called “environmental charlatanism.”

I have been engaged in environmental affairs in Israel for some 30 years. Never have I heard such a sweeping and exaggerated attack by a government minister on the country’s environmental movement. As Elkin chose to show up, give his speech and leave immediately, I thought it well to respond to his arguments — and shed some light and specifics on his many spurious claims.

Elkin focused on three controversies in which the Ministry of Environmental Protection found itself in a confrontation with Israel’s civil society and even the local academic community. From his perspective, in each case, environmental organizations acted unprofessionally, in a sensationalistic manner, causing gratuitous panicking among the general public, along with negative environmental outcomes. Time after time, he returned to his refrain of: “environmental charlatanism.”

The first case mentioned was the campaign of the organization “Homeguard Protectors” (Shomrei HaBayit), Zalul and innumerable citizens against the opening of the Leviathan gas platform and natural gas refining 10 kilometers from the Dror-Habonim beach. That very week, during the launching of the operation, activists called for residents to abandon their homes on land, due to concerns about air pollution emissions – a concern that happily proved to be unfounded. In Elkin’s view, without the Leviathan platform, it would be impossible to reduce the use of coal in polluting power plants – a transition that dramatically improves Israel’s air quality.

Elkin’s critique was ill-advised, inter alia, because it was so all-encompassing, lambasting all Israeli environmental NGOs. The thing is, there probably has never been a controversy as hotly debated between Israel’s highly opinionated green organizations as the Leviathan platform. Adam Teva V’din, (the Israel Union for Environmental Defense) and the Society for Protection of Nature in Israel, the country’s two most prominent environmental groups considered the matter closely and finally reached the conclusion that of the many imperfect alternatives, the proposed site was optimal. At the same time, they called for tougher inspections and enforcement around the platform along with legislative reform to strengthen the lax regulation in Israel’s Mediterranean waters.

The organizations reached this conclusion after extensive consultation with those opposing the platform’s location so close to Israel’s coastline. They soon paid a high price for taking an unpopular position. Not only did they face harsh substantive criticism, but their leadership was the target of nasty personal attacks, even as Iris Hann and Amit Bracha (the CEOs of SPNI and Adam Teva V’din) are among Israel’s most principled and professional environmental leaders. In ignoring the courage these organizations displayed in accepting his Ministry’s position, Elkin displayed extreme disconnect from the field, or extreme cynicism.

The debate between the environmental ministry and organizations opposing the Leviathan platform location is not only legitimate but important. We face a very serious dilemma, and errors are liable to produce an ecological catastrophe. There really is no place in this discourse for such vituperative condemnation of citizens, most of whom are volunteers, who invested considerable time and money in collecting information, international expertise and scientific opinions about protecting the marine environment.

Israel has a short and narrow coastline. It is not clear whether the Ministry of Environmental Protection has upgraded its own professional capacity sufficiently, increased the level of inspection in the sea and internalized state-of-the-art practices from Europe and the US regarding regulation of offshore gas operations.

Surely both sides of the argument can agree that natural gas exploration operations located in such proximity to Israel’s beaches constitutes a significant environmental risk. The probability of an ecological disaster from a malfunction or by being targeted by Israel’s many enemies is a not inconsequential. The highly vocal opposition of citizens forced the environmental ministry to up its game and go beyond its dependence on data and expertise provided by the Noble Energy corporation, which has spared no expense in promoting its natural gas projects in Israel. This is something for which the Minister should be grateful.

During the past year, the State Comptroller issued one of the most scathing reports in history about the flaws in Israel’s environmental enforcement system. The senior management and experts at the Ministry, for which Elkin is responsible did not deny the findings. It would be well for the minister to show a thimbleful of humility when talking about a new and particularly difficult inspection challenge, given its potential to destroy one of the most beautiful remaining pieces of Israel’s Mediterranean coastline.

Elkin went beyond his charges of charlatanism with regards to the Leviathan debate. He then chastised organizers of the campaign to remove the massive ammonia tank from the heart of Haifa Bay. In his view, a risk assessment prepared by leading professors at the Technion was exaggerated and unsubstantiated, actually increasing the environmental hazards facing Haifa residents. (Elkin never explained exactly how.)

In this case, a long-running environmental protest received scientific support from top researchers at Israel’s most vaunted scientific institution. It is not at all clear that the environmental ministry has more skilled professionals, especially when one of the experts involved in the Technion report was a Nobel Prize winner in chemistry.

As a result of the Technion study, the campaign to remove the ammonia hazard received the support of Haifa’s mayor, who was generally very tolerant of the area’s polluting factories. Empirically, it was the report that energized efforts to successfully evacuate a substantial environmental risk – one that every environmental minister in Israel’s history had tried to eliminate. Instead of thanking the scientific community for its voluntary involvement in applying the “precautionary principle” – a centerpiece of the ministry’s ideology — Elkin again preferred to call them charlatans.

And if this was not enough, he then went after environmental groups, especially Adam Teva V’din, the Israel Union for Environmental Defense, over its insistence that large beverage containers (from 1.5 liters and beyond) be included in the country’s deposit system. The exemption that large bottles receive from the deposit law was born in sin over 20 years ago when bottle manufacturers and supermarket chains hired lobbyists to kill a proposed bottle-deposit bill. A temporary compromise to pass the law, left half of Israel’s bottles out of the deposit system. In Israel, temporary measures tend to produce the most permanent arrangements. And so, we have a bizarre and illogical deposit program that exists nowhere else in the world, that practically every environmental minister has tried to cancel.

Elkin claimed that the amount of plastic from large beverage containers is only half of one percent of plastic waste in Israel; fixating on it makes no sense. To begin with, it is a pity that he referred to the weight of the plastic – when volume is a more germane parameter. Moreover, the organizations’ position takes into consideration the pathology of litter in public spaces. But even if the minister truly believes that the best strategy for addressing Israel’s solid waste crisis truly is the construction of “waste-to-energy” incinerator: why the hostility? It’s not at all clear why collecting and recycling large bottles constitutes environmental charlatanism, when most enlightened countries require all beverage containers to be part of their deposit systems, without exemptions.

Elkin’s attack is particularly unfortunate as he is among the most intelligent politicians to ever fill his present position. There are several possible explanations for his decision to attack Israel’s civil society with such virulence in such a public venue. Perhaps he was simply annoyed. But Elkin gives the impression of a person who doesn’t suffer from inadequate self-control. Another more disturbing explanation is that in an era of non-stop election campaigns, he believed that there might be political dividends from such a verbal assault.

To this day, Israel has managed to avoid the tragic dynamics (that exist for some time in the US) where environmentalism falls victim to the general political polarization. From Roni Miloh (Israel’s first environmental minister) to Gilead Ardan (the last minister to leave a mark on Israel’s environment), Likud leaders have always seen protecting the land of Israel as a central value.

It can only be hoped that Elkin reconsiders his strategy of direct confrontation with Israel’s environmental movement. Clearly, there were always arguments and disagreements over policy. But since the Society for the Protection of Nature in Israel opened its offices some 60 years ago, environmental organizations have largely been partners with government agencies. Indeed, many of Israel’s most important environmental achievements are a result of this teamwork. Instead of castigating environmental organizations as “charlatans,” it would be better to hear about “partnership.” The country’s environmental challenges today are greater than ever. We need all available forces in government and civil society if we are to leave a healthier country to future generations.