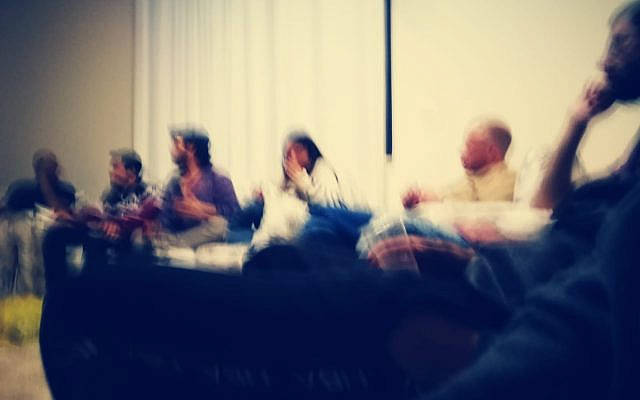 Yes, you read that right. On Wednesday night, “Holocaust Remembrance Day” and “Ramallah” came together in the same breath, when we organised a private event at our friend’s home in Ramallah. Zikaron BaSalon is an initiative that has been put to practice by Israelis on every Holocaust Remembrance Day, wherein anyone can host a Holocaust survivor in their living room, as they take the audience on a walk-through of their personal story. So anyone?

At Holy Local Aliens, our unique community of friends from Israel and Palestine, we like to share our holidays together. We celebrated Purim, did  Passover seders, and soon, we will be hosting Iftars on Ramadan. But as much as we love to rejoice together, we also believe in observing solemn occasions too, with the same kind of solidarity. So when Yom Hashoa was still a few weeks away, we thought why not get together with our friends, from both sides of the border, and reflect upon the biggest tragedy to have ever fallen upon the Jewish people.

Although, once again we were faced with the issue of “no permits for Palestinians to Israel.” So, we asked a friend who lives in Ramallah to host the event in her living room, so that our friends from Nablus, Jericho, Bethlehem and Hebron could attend. Soon after, we embarked on a search for a good speaker and found the perfect person in a professor of Holocaust studies, whose parents were Holocaust survivors, and who has even taught about the Holocaust to Arab teachers.

This was the lead-up to our unique Zikaron BaSalon that night: Two Israeli cars entered Ramallah; their Palestinian friends were waiting for them, to help navigate (since Waze doesn’t work there) and also show them around the city (since we were already there). As we know, Israelis are normally not allowed to enter Area A, but of course, we find our way when we want to visit our friends, fix our cars or just want to shop for cheap. And now we had an even better excuse for breaking the law: we were bringing a professor in Holocaust studies, along with his wife to talk to our local friends.

On top of all challenges, it was the Palestinian salary day, and the traffic was even worse than usual. Our professor recalled memories from his military service of more than forty years ago, as we neared the iconic Al-Manara square, with its four sculpted lions towering over the Ramallah city center. 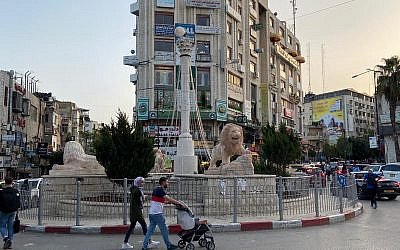 We were running late, but we finally made it to our destination. Our host’s living room was spacious, and could comfortably seat 23 guests — 14 Palestinians, eight Israelis and even one German!

We opened with an introduction circle, asking people what they knew about the Holocaust. Among the Palestinians in the room, some said that had read about it, some doubted the authenticity of what they read in Arabic, three had watched The Schindler’s List, one had visited Yad Vashem, and one had never even heard the word “Holocaust”.

The professor said that his intention was not to give a lecture on history, but rather welcome any questions. “Why did this happen?”, was the first one. He took us briefly through the roots of racism and anti-Semitism, reminding us that the first expression of racism in Europe was against the Chinese.

But soon after that question came up, which some of us  can even find offensive – ‘why the Jews, who suffered so much, would treat Palestinians the same way?’ I should mention here that the question came from guests who are not part of our community and have no Israeli friends to talk to about the shoah in casual settings of trips, hikes and gatherings.

The professor said, “When I was teaching about the Holocaust to  Arab teachers, I wrote a paper which  I titled “The Suffering of the Other”. It’s very difficult for someone who has suffered, to hear about the suffering of the other. And this applies to not just Israel and Palestine, but many warring nations around the world. Everyone feels that their own suffering matters the most; they are not free enough to think about what the other is going through.”

In the discussion that followed, we did agree and realize that in the context of Israel and Palestine, while we shouldn’t compare the Shoah and Nakba, there is no escaping the truth that both have shaped Israeli and Palestinian identities and stand as archetypes of national pain.

Close to 10 pm, when our lovely hostess raised the issue of her delicious majadra turning cold, we broke for dinner. As we resumed our seats post-dinner, with renewed energy, we asked the professor to tell us his personal family story. Because this is exactly what makes Zikaron BaSalon different from other events on this day –  the opportunity to understand and relate to the past, not only through facts and history but through emotions and empathy, to actually feel for the other.

Towards the end of the night, we all agreed that we need to have more events like this, and not just once a year. Everyone who came showed courage in their own way — our host, the professor, his wife, and all of the participants who broke some laws, crossed some illegal and emotional borders and got out of their comfort zones.

Perhaps the most important thing about this night though was that it just happened. 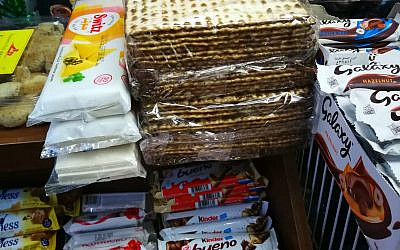 Matzah sold in downtown Ramallah (courtesy of the author)
About the Author
Ruth is a peace activist and among the founders of the organization "Holy Local Aliens." It is a community of locals (and non-locals) in Israel and Palestine, meeting to explore and build bridges with no ideology except friendship. They often go on exciting trips in nature or visit unique minorities in the Holy Land. Anyone is welcome to join them on their adventures! Ruth was born in Bulgaria, lived in Germany, and made aliyah seven years ago.
Related Topics
Related Posts
Comments