The Jerusalem shul has this up front:

Plaques like these are common in shuls all over; they show the specifics of daily and weekly shul routine.  What makes this one different is its dedication: L’ilui nishmat baneinu hakedoshim, in memory of our holy sons.  The first son was murdered by a terrorist in 2002.  He was 19.  The two below were soldiers who fell in battle, in 2003 and 2014.  They were 21 and 22.

Terrorists have claimed others from among those who daven here.  One man lost his wife; his second wife had lost her husband.

This is a small place.  Most everyone knows each other.  Many also knew, personally, the sons and spouses who were killed.

Nor is this shul’s collective experience unique. 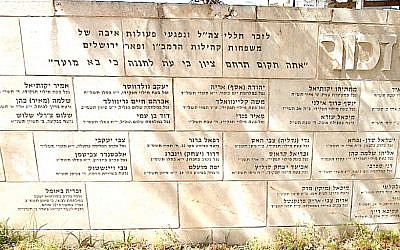 This memorial wall not far away, shared by two adjacent shuls, commemorates soldiers who fell in the line of duty, along with civilians murdered in the middle of daily life in what the inscription calls pe’ulot eivah, acts of hatred.  Dates of death range from 1948, when a woman was killed in the Old City, to 2016, when a man was killed on his way to visit his mother.  The memorial includes soldiers who fell in wars or in the line of other duty during every decade since the 1940’s.

No doubt many of the fallen and lost, and their families, are known to people who pass by on their way home or to visit friends for Shabbat lunch.

Yizkor plaques can be found all over the world, wherever Jews gather to daven, but memorials here are different.  Elsewhere, most who are named on Yizkor plaques passed away long ago and far away.  Here, many were taken just the other day, or year.  Their faces are still vivid, as is their absence, to their families and those who knew them.

Another difference: most names on Yizkor plaques elsewhere passed away in the fullness of years.  Here, many were torn from the world before their own life properly began.

Israelis know and feel all this, though they don’t talk about it.  Even knowledgeable and sympathetic non-Israelis do not really understand it, because they do not live it.

There are times set aside to express grief.  We say Yizkor on certain holidays.  Israel has Yom Hazikaron, the intense day of memorial for fallen soldiers and civilian terror victims that ends with a jarring transition to the raucous celebration of Yom Ha’atzma’ut.  The rowdiness of celebrating the latter serves, perhaps, as a cathartic inversion of yesterday’s grief.  Outside of Israel the power, intensity, and significance of Yom Hazikaron hardly register.

The bus to Har Herzl, site of the Yom Hazikaron ceremony at the military cemetery, was jammed with young people.  A friend and I made our way from a side entrance through teeming crowds, filled with soldiers and families, and very many adolescents, to the right section.

My new friend Stephen Glazer made aliya many years ago from Toronto.  He volunteers forלתת פנים לנופלים, Latet Panim Lanoflim, a group dedicated to researching the lives of soldiers who fell in battle over the past 100 years, about whom little or nothing is known, even by some of their families.  Each Yom Hazikaron he speaks to assembled soldiers and others about such a fallen fighter. 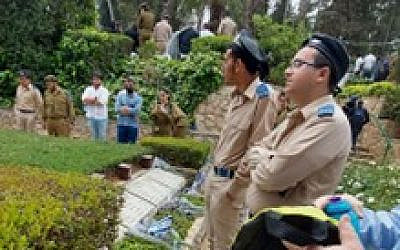 We gathered at a cluster of headstones around a collective grave containing the remains of fifteen of the fallen.  Stephen spoke of Tuviah Mermelstein, who was born in Velykyi Bychkivbych, then Czechoslovakia, now Ukraine.  He survived Auschwitz, where his father died, and escaped the postwar Soviet regime by fleeing with four friends through Romania to Italy to get to Israel as part of the bricha. Tuviah got to Israel the day after the State was declared and enlisted in the IDF.  He fought nine days later in Latrun in the battle against the Jordanian Arab Legion to open the road to Jerusalem, and died of his wounds.

Researching Tuviah’s life, Stephen left a note on Tuviah’s grave that elicited a call from a relative.  It turns out that Tuviah’s family came to Israel in the 1970’s and 80’s.  They have done well, and are very happy here.

Stephen met with their extended clan in Kiryat Gat, near Be’er Sheva.  He told them what he had learned about Tuviah, along with something shared by another visitor to the grave.

Yitzhak, an 87-year-old driving teacher (!) had met Tuviah on a train during their flight from postwar Europe to Israel.  They became close comrades and enlisted together in the IDF.  Both were supposed to go into battle at Latrun, but Yitzhak developed a kidney stone the night before.  Tuviah went alone.  (Tuviah’s story is here.)

As Stephen spoke, the young men and women soldiers posted to the gravesite listened with greater interest than people with gray hair usually expect from youngsters generations behind them. His listeners showed interest that went beyond mere politeness.

The official Yom Hzikaron ceremony began shortly after, unseen from our vantage but broadcast over loudspeakers.  The Prime Minister and IDF Chief of Staff spoke movingly, about sacrifices across generations.  The IDF Chief Rabbi offered a tefillah.  Its Chief Chazan sang Kel Male Rachamim.

Some texts added to standard tefillah are sung to a tune; others are chanted with nusach, like regular tefillot.  A few are spoken.  This sets them off from what precedes and follows, and gives words a jarring immediacy they might otherwise lack.

In shul at Yizkor on the last (seventh) day of Pesach, an elderly Israeli recited a third Kel Maleh for those murdered by terror.  He did so in a harsh voice, the words less spoken than spat: 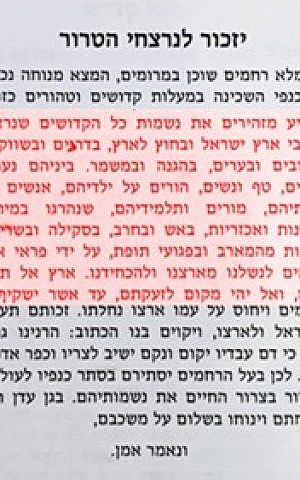 “God of Mercy…bring proper rest to those…who were murdered throughout Eretz Yisrael and outside it, on roads and in markets, in villages and cities, on guard or in defense, among them young and old, infants and women, parents with their children, men with their wives, teachers and students, who were put to strange and cruel deaths, by fire and sword, by stoning and burning, by shootings from ambush and by car bombings, perpetrated by savage people who come to expel us from our land and eradicate us.  Earth–do not cover up their blood!…”

People say that it is hard for outsiders to appreciate how personal Israelis find Yom Hazikaron.  “Personal” implies something that belongs to you, not to others.  That is true for Israelis on Yom Hazikaron, not just because of their loss but of their experience of loss.  With all the good will in the world, others cannot share, or even truly empathize with, what they have not suffered themselves.

Most of us can commiserate with what we have gone through or can imagine undergoing.  Many people suffer some form of bereavement.  Few see loved ones killed in their prime or children and spouses murdered.  None would wish to.

Times that call for empathy present us with limited options: a passing touch, a pat, pallid phrase.  We would like to rest a gentle hand and say, “We understand…”  But we do not understand.

There are times when empathy and consolation are not just unfitting but indecent.  Rabbi Shimon ben Elazar said: וְאַל תְּנַחֲמֶנּוּ בְּשָׁעָה שֶׁמֵּתוֹ מֻטָּל לְפָנָיו, do not comfort someone while his dead lies before him.  For many here, that is always.  Every day these dead are before those who mourn them—sometimes literally up front, on the wall—where their memory is framed—again, literally—by regular routine:

Today we count the omer, today we say morid hatal, we say v’ten bracha, we say ya’aleh v’yavo.  Today we wish each other chag sameach.  And today we mourn a child, or a spouse.  As we do every day.  As does our friend, who sits five feet away.

None of this is said out loud.  Life here proceeds, with furious zest and youthful vigor.  (Look at all those children and teens—in a cemetery!)  On Yom Hazikaron the nation mourns.  Those who suffered losses visit the graves of those they lost, joined by people who know them and knew the ones who are gone.  There is a special word for such mourners: שכולים, shakulim, which in modern Hebrew means those bereaved of close relatives, especially children.And those who observe, from far or near, with no way to really understand and no prospect or wish to fathom what the mourners and those close to them are going through, incline our heads in respect, and in silence.

The Kel Male Rachamim for terror victims that I heard uses words and phrases that are raw and bitter.  Elsewhere, they might sound like liturgical rhetoric.  But that is not how they sound here, where they evoke—yet again, literally—the news headlines of this very day, along with headlines of more days past than souls can grasp and hearts can bear.

About the Author
Avi Rockoff came on aliya with his wife Shuli in March 2022. They live in Jerusalem.
Related Topics
Related Posts
Comments