This blog post will is the first of three that will deal with three issues that I believe are linked.

The third post will deal the Shavuot. In my blog last year, I wrote about the disproportional impact of converts on the Jewish people. This blog will deal with the growing support for Israel by Christians, and the growing interest in Torah and Shabbat.

So, let’s get started.

Arthur Bloomberg was a Professor of history at Towson University and is a respected expect on Palestine and Israel researching many original Archives. This blog is based is on his Book which is very detailed and technical (and was quite a hard read but recommended who for anybody who wants a real understanding of this crucial time of world history). It is available from Pomeranz book store in Jerusalem.

The book examines 3 things, the interplay between the native ‘Palestinian’ population, the essentially foreign Turkish government imposed on them and the aggressive ambitions of the European Christian nation.

Prior to 1841, Palestine was regarded merely as an appendage of Lebanon and Syria. Jerusalem was a decayed town of less than 10,000 inhabitants. Foreign non-Muslims were absolutely denied the right of permanent residence in the Holy City.

Getting to Jerusalem was very difficult and fraught with danger. Not many ships stopped at one of the primitive harbours of Gaza, Jaffa or Haifa. Once arriving one needed to buy protection and followed some trails (not roads) to Jerusalem.

Who was this local population?

The Jewish   population were mainly Sephardim who were led by a Chief Rabbi bearing the Title of Rishon L’Zion.  Only in 1842, after the 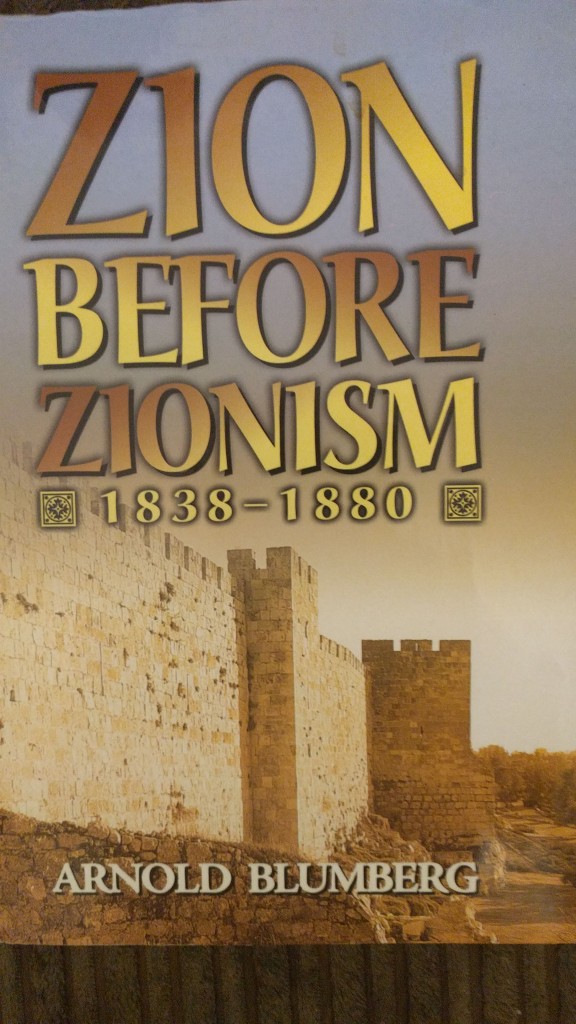 retreat of the Egyptians who tried to meddle in the affairs, did the Turkish Government give official status to the Rishon L’Zion. They were treated as inferiors, but were secure in their role in the Moslem society.

In 1841, the steamboat made viable was an impossible dream for previous generations. It enabled an influx of Russian Jews to move to Palestine. There where poverty and health issues. Although both groups were religious, there were many differences and much tension arose. These immigrants relied on Funds sent from Europe and were subservient to the Rishon L’Zion who controlled the supply of meat and the payment of the tax on the slaughter of Animals.

All the populations, both Jews and Arab Moslem had absolute no sense of nationalist identity. This changed with the entrance of the Europeans. The European powers being at that time Christian consisting of Russia, Prussia, Austria, Germany, France & The UK all had consuls in Jerusalem.

In addition, until the introduction of the telegraph in the 1840’s communication was very slow and this further was a reason for the lack of activity or development of Jerusalem.

At this time, there were severe restrictions on buildings of shuls and churches. All the changed with the conclusion of the Crimea War in 1856 where the Turks were forced into making concessions to the Europeans. The facts of the Crimea War is beyond the scope of this blog, but suffice there was a building boom in Jerusalem. When one walks around Jerusalem today, one sees the large Russian Compound , the many  elaborate churches , and the German and Greek Colonies. All this relates to  the time after 1856. Notwithstanding the Crimean War and the appointment of a young governor Kiamal Pasha , much remained to make Jerusalem and the Land open to genuine toleration of foreigners and infidels.

Until the mid-1850s, Jeruselam consisted of the Old City and the main built up areas outside the walls were the Mosque of David (today a synagogue) and the village of Silwan. The majority population was Jewish.

Building spree following the Crimean War: (as extracted from Wikepedia)

Institutions including the Russian Compound, Kerem Avraham, the Schneller Orphanage, Bishop Gobat school and the Mishkenot Sha’ananim which was  marked the beginning of permanent settlement outside the Jerusalem Old City walls.

Mishkenot Sha’ananim (Hebrew: משכנות שאננים‎) was the first Jewish neighborhood built outside the walls of the Old City of Jerusalem, on a hill directly across from Mount Zion. It was built by Sir Moses Montefiore in 1860 as an almshouse, paid for by the estate of a wealthy Jew from New Orleans, Judah Touro. Since it was outside the walls and open to Bedouin raids, pillage and general banditry rampant in the region at the time, the Jews were reluctant to move in, even though the housing was luxurious compared to the derelict and overcrowded houses in the Old City. As an incentive, people were paid to live there, and a wall was built around the compound with a heavy door that was locked at night. The name of the neighborhood was taken from the Book of Isaiah 32:18: “My people will abide in peaceful habitation, in secure dwellings and in quiet resting places.”

Mahane Israel (Hebrew: מחנה ישראל), built in 1869, was the second Jewish neighborhood built outside the walls of the Old City. Mahane Israel was a “communal neighborhood” and was built by and for Maghreb (western North Africa) Jews.

Nahalat Shiv’a was the third residential neighborhood built outside the city walls. It was founded in 1869 as a cooperative effort by seven Jerusalem families who pooled their funds to purchase the land and build homes.

The neighbourhoods that make up the Nachlaot district were established outside the walls in the late 1870s.

In Conclusion, it is important not only to look at the ancient history of Jerusalem but also look at the events over the last 150 years to better understand the development of the City. This clearly demonstrates the continual link that Jews in Jerusalem and with God’s help may the prophecy of Isaiah come to fruition – “My people will abide in peaceful habitation, in secure dwellings and in quiet resting places.”