At the beginning of the 20th century anti-Semitism was rampant and Jews found themselves persecuted and unwanted everywhere. In Europe the ruling classes incited the mobs against the Jews to provide a scapegoat for the misery of the masses, and discrimination and pogroms against Jews were rampant. In the Arab world, from North Africa to the Middle East, the Jews suffered the chronic condition of “dhimmis”, a status of legal, social and psychological submission to the Muslim majority accompanied by bursts of physical violence. On top of this, the surge of nationalism in the Arab countries found the Jews as an easy target for scapegoating, rioting and pogroms.

The Zionists were a small bunch of idealistic people in pursue of a dream.

Their dreams would not have become true if the worst of their nightmares would not had become a reality: the rise of Nazism – with hundreds of thousands of desperate Jews fleeing Europe – and the ethnic cleansing of the Jews in the Arab countries – with another half million Jews arriving to Israel from Northern Africa and the Middle East.

America did its part, by closing its gates to immigration when the Jews most needed it. 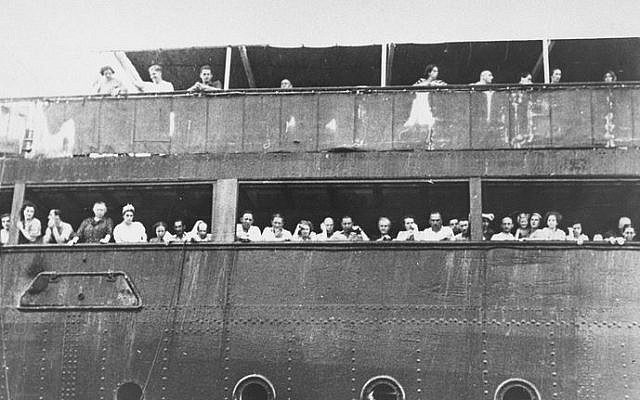 In May 1939 the ship St Louis (shown in the photo above) sailed from Hamburg, Germany, to La Habana, Cuba, carrying 937 passengers, most of them Jewish refugees. They had been given entry visas to Cuba, but upon their arrival to La Habana, Cuba’s government refused to allow the ship to land. The ship continued to Miami, Florida. The passengers begged US President, Franklin D. Roosevelt, for sanctuary. They were refused. They also applied to land in Canada, but its prime minister refused. The ship went then back to Europe. More than two hundred of its Jewish passengers perished then in concentration camps. In 2012, the United States Department of State formally apologized to the survivors of the ship. In 2018, the Canadian prime minister Justin Trudeau issued a similar apology.

On the eve of World War II, on May 23 1939, the British issued a policy statement known as the “White Paper”. The new British policy limited the Jewish immigration to Palestine to 15,000 per year for the next five years (the official quota being 10,000 Jewish immigrants per year, leaving an additional 5,000 per year for special humanitarian circumstances). World War II was on the offing and the British Empire wanted the support of the Arab world.

The European Jews got trapped inside Europe when they most needed an escape route. 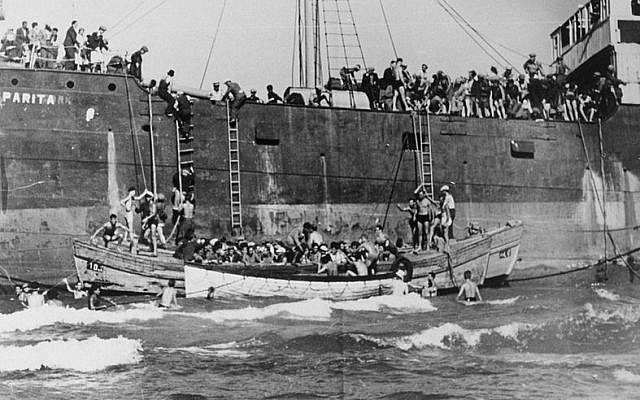 Illegal immigration (in the eyes of the British) of Jewish refugees from Europe to Israel in 1939 (Photo: United States Holocaust Memorial Museum)

The Jewish people organized desperate attempts to save Jews from Nazi Europe during the 1930’s and 1940’s. One of them in shown in the photo above: the ship Parita, carrying 850 Jewish refugees, lands on a sandbank off the Tel Aviv coast on August 1939.

With the British gone and the declaration of independence in May 1948, the gates of Israel were finally opened for a massive influx of Jewish refugees from Europe and the Arab countries. Jews in dire distress had finally a place where they could go to and be unconditionally accepted.

The Arab states did not accept Jewish independence and invaded the nascent state. The situation was initially quite bad for the Jews and no one expected them to win the war. On the first night of Israel’s Independence, Egyptian planes bombed Tel-Aviv. A few weeks before, in April 1948, a convoy of nurses, doctors and medical students set out for the Hebrew University, located on Mount Scopus, Jerusalem. They were assaulted by Arab militia: 75 Jews perished in the attack. In May 1948, four kibbutzim

in Gush Etzion, next to Jerusalem, were completely destroyed and about 130 Jews – who had surrendered – were summarily executed, women and men. It was a bloody war that extended for a whole year.

Jews had nowhere to flee, so they stayed put, fought, and got their State.

The ethnic cleansing of the Jews from the Arab countries

In less than one-generation time, about 870,000 Jews were expelled from the Arab countries, their properties confiscated and converted into refugees. The majority of these Jewish refugees were absorbed by Israel, as shown in the map below: 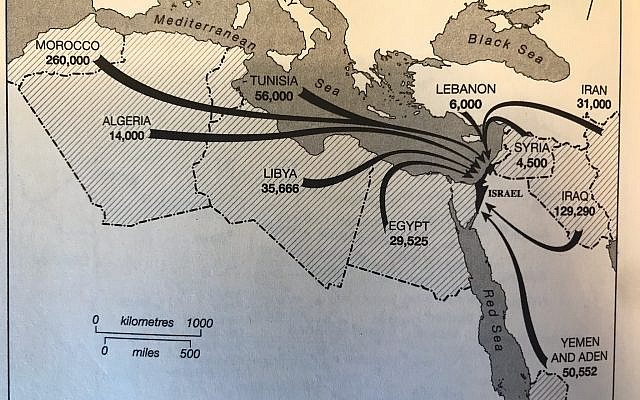 Map showing the ethnic cleansing of the Jews from the Arab countries (source: Martin Gilbert, “In Ishmael’s House: A history of Jews in Muslim lands”, 2010 edition)

The numbers in the map show the number of Jews who were expelled from each Arab country and sought refuge in Israel between 1948 and 1972. Iran (not an Arab country) recognized Israel in 1950: 25,000 Jews from Iran emigrated to Israel in 1950-1951. The above map and the numbers cannot convey the scope of the tragedy of the Jewish refugees from the Arab lands. The massive ethnic cleansing of the Jews from the Arab countries has been systematically hidden and erased from the public memory in the Western world. 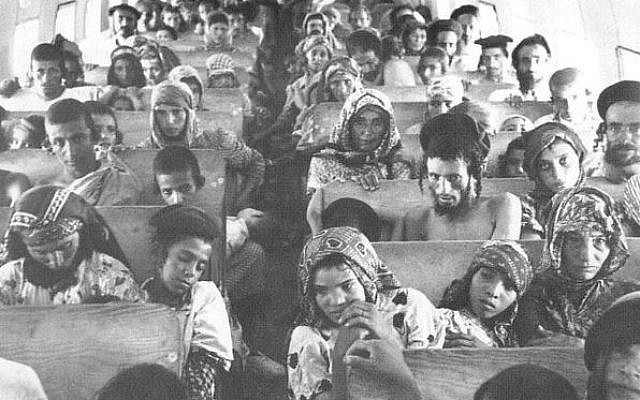 Between June 1949 and September 1950, 50,000 Yemenite Jews were airlifted to Israel, closing more than 2,000 years of Jewish life in the Arab peninsula. In Yemen, some of the harshest aspects of Islamic dhimmi practices had been reimposed in 1922, including the rule that Jewish children who became orphans before they were fifteen were forcibly converted to Islam [Martin Gilbert, pages 157-158]. The airlift of the Yemenite Jews in 1949-1950 was preceded by riots: in Aden, at the Southern tip of Yemen, a Muslim mob attacked the Jewish Quarter on December 1947: 82 Jews were killed and 106 Jewish-owned shops were destroyed. A synagogue and Jewish schools were burned to the ground [Martin Gilbert, pages 209-210]. (Photo from Wikipedia Commons)

“In Yemen, a nineteenth-century decree for the forcible conversion of Jewish orphans was reintroduced in 1922. The conversion of a dhimmi orphan to Islam had always been considered a meritorious act. This followed the belief that every child, whoever his parents, was born into the fitra, or innate disposition, which was taken to mean that he was born a Muslim. … For seven years the decree was rigorously implemented. When it was re-promulgated in December 1928, twenty-seven Jewish orphans were forced to convert to Islam within four months.

On 3 January 1929 [in] the capital of Yemen, Sanaa, … two young orphans, brother and sister, agreeable looking, were snatched away from their mother in full view of the Jewish population, despite the cries of the desperate family. The Jews got together and collected a sum of money in order to buy back the children. But this was in vain. The Quran prohibits Muslims from accepting money in order to prevent a conversion.” 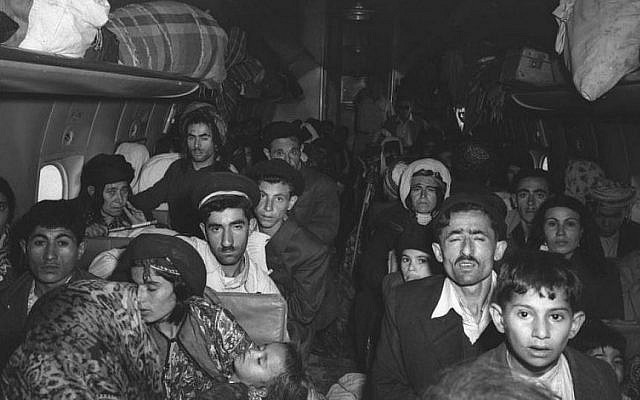 Decades long persecution of the Iraqi Jews culminated in 1951. In that year, 130,000 Iraqi Jews were airlifted to Israel. The Iraqi government stripped the Jews of their Iraqi citizenship as a condition for allowing them to leave the country. Then, the Iraqi Parliament secured the passing of a law whereby the assets of all the Jews who renounced Iraqi citizenship were frozen and put under the Iraqi government control.  2,500 years of Jewish life in that piece of land, since the times of the Babylonian Empire – and preceding by thousand years the Arab conquest in the 7th century CE – came to an abrupt end. Less than ten Jews live today in Iraq.

Israel was born as a nation of refugees, who came to its shores because they had nowhere else to go. They came with nothing, except for their bare hands and traumatized minds.

Martin Gilbert: “In Ishmael’s house: A history of Jews in Muslim lands” (2010 edition)

For more information you can download for free my recent book “Ethnic Studies in K12 schools: The Jewish module”: