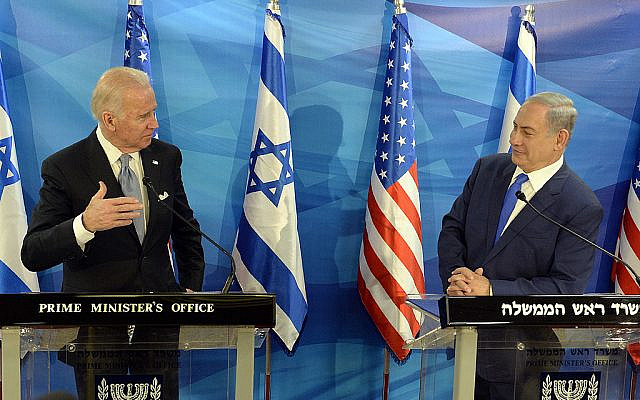 Brutal attacks by many right-wing Zionists on presumptive Democratic nominee Joe Biden, accusing him of being anti-Israel, are particularly visible on social media where those individuals dominate the discourse among Zionists. How did so many Zionists become so hostile towards a man who describes himself as “an ardent Zionist” (something that Donald Trump has never done) and is probably the most pro-Israel candidate to the US presidency in the history of US/Israel relations?

It seems that most right-wing Zionists have lost their moral compass.

They enthusiastically support unilateral annexation of some or all of the West Bank, thus adopting the occupier mindset that might is right. They are offended that the U.S. Democrats expect Israel to negotiate the borders with a Palestinian state rather than impose borders, yet except for the Trump administration that remains uncommitted on the question, unilateral annexation is widely opposed by Israel’s allies. This includes British Prime Minister Boris Johnson, a pro-Israel Conservative, and both Peter MacKay, and Erin O’Toole, the two leading candidates to the leadership of Canada’s Conservative Party, even though they both promise to move Canada’s embassy to Jerusalem if elected.

The Trump peace plan has the concept of Palestinian enclaves within Israeli land, and Israeli Prime Minister Benjamin Netanyahu stated that “Palestinians will remain Palestinian subjects living in enclaves and would not receive Israeli citizenship”. Benjamin Pogrund, an Israeli author and an early ally of Nelson Mandela, said that, “the idea of Palestinian enclaves within sovereign Israel is reminiscent of the bantustans in apartheid South Africa — non-contiguous territories the racist Afrikaner government set aside for blacks”.

Despite that, such a concept is fair enough if one looks at the plan as an initial offer for negotiations, but it is highly unfair if it is a fait-accompli that the Palestinians have no opportunity to object to or negotiate. With the annexation plans that Israeli Prime Minister Benjamin Netanyahu has promised, these cantons would be imposed on the Palestinians.

But even that shred of Palestinian autonomy is opposed by some right-wing Zionists who object to any form of Palestinian self-determination. These Zionists do not even accept that the Palestinian people exists.

While there is no peace agreement in place, reasonable people, including Joe Biden, are not opposed to Israel’s military presence in the West Bank. It is understood that IDF presence in the West Bank, particularly in the Jordan Valley, is needed for Israel’s security. Unilateral annexation, however, is different because it is a permanent state that takes away the Palestinians’ ability to negotiate, and it imposes a permanent solution on them. The more land Israel annexes, the more it makes a two-state solution difficult to achieve.

If a two-state solution becomes unworkable then all that is left is a one-state solution in which Arabs would be either a majority or close to it. If this occurs, the Jews of Israel would have to either give up the concept of a Jewish state or institute an apartheid system in which Arabs have lesser rights. Either way, the Zionist goal of a democratic Jewish state would be dead.

To be completely fair, even though support for unilateral annexation is not morally justifiable, it is understandable. One hundred and thirty-seven years of Arab rejection of Jewish self-determination have frustrated Zionists across the political spectrum. Many are disillusioned about the Palestinians ever accepting a reasonable two-state solution, and they are willing to consider alternatives, even if far-fetched and risky.

What is neither justifiable nor understandable, however, is support for US president Donald Trump, a deeply unethical and incompetent president who intensifies race-based divisions for his own benefit and who has a long history of antisemitism, including keeping a book of Hitler’s speeches by his bed.

Most right-wing Zionists claim that Trump is a great friend of Israel, but Trump has only taken three tangible actions that could be seen as pro-Israel: Moving the embassy to Jerusalem, cancelling the nuclear deal with Iran, and stopping aid to the Palestinian Authority. All three of these actions are failures.

Trump moved the embassy indeed, but he moved it to within the green line. It enraged many Palestinians, which made some Zionists feel good, but it changed nothing in terms of Israel’s position in future negotiations. The move was symbolic at best. And in any case, Biden said that he would not move the US embassy back to Tel Aviv.

Trump cancelled the Iran deal one and a half years after his election, and he imposed additional sanctions on Iran. It is a strategy that should have worked if Trump had managed to convince other countries to follow suit, but Trump has been totally incapable of creating coalitions with other countries, on this issue as on all others. Therefore, despite the cancellation of the deal, the Iranian regime continues to work towards nuclear capability, with less restrictions now than while the deal was in place.

Trump stopped aid to the Palestinian Authority, conditioning the resumption of aid on the PA no longer funding terrorism. But like Trump’s Iran policy, this one is ineffective as well because Trump could not convince any other country to follow suit, assuming that he even tried. The only outcome of this policy is that the US now has absolutely no influence over the PA, as we saw when PA chair Mahmood Abbas refused Trump’s peace plan out of hand and even obtained Arab League backing for this refusal.

Most right-wing Zionists are not only out of sync with Americans who gave three million more votes to Hillary Clinton than to Donald Trump, but they are especially out of sync with American Jews.  American Jews voted for Hillary Clinton in 2016 at a rate of 71% and gave Trump only 24% of their votes, less than any other religious group identified by Pew Research Center.

The right-wing rhetoric against Biden lacks substance. It ignores the 228 pro-Israel Democratic members of Congress, it maximizes the importance of 4 new and inexperienced members nicknamed “the squad”, and it obsesses over Biden’s opposition to unilateral annexation even though he would not penalize Israel over it.

The sad reality is that most right-wing Zionists have become much more right-wing than Zionist. They aggressively promote acquiring more land, denying Palestinians the right to self-determination, and shoring up the failed presidency of Donald Trump, at the expense of the survival of Israel as a viable Jewish state and at the expense of US bi-partisan support for Israel. Ironically, their position on Biden is closer to Palestinian-American Congress member Rashida Tlaib who refuses to endorse Biden than it is to pro-Israel Democrats who enthusiastically endorse him.

Whereas early Zionists of the right and left were bold but cautious, most right-wing Zionists have become arrogant and careless. Through their ill-considered policies and alliances, they are putting the future of US/Israel relations and the future of the Jewish state at considerable risk.

Note: I wrote “most right-wing Zionists” rather than “right-wing Zionists” because my criticism does not apply to all right-wing Zionists. David Frum, a Jewish pro-Israel Republican, is an example. Frum has opposed Donald Trump from the start, and he still does. He wrote “Trumpocracy: The Corruption of the American Republic” (2018) and “Trumpocalypse: Restoring American Democracy” (2020).