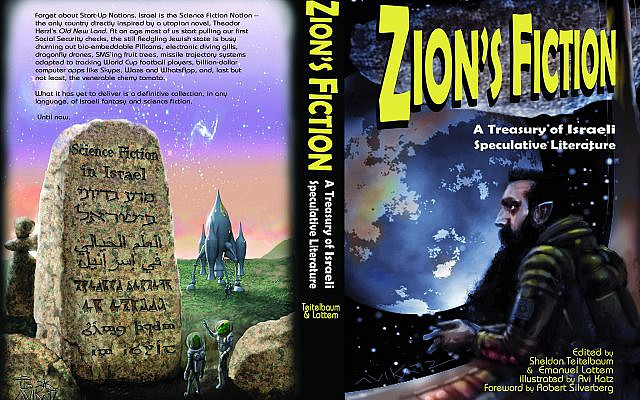 Sheldon Teitelbaum and Emanuel Lottem’s scholarly and nearly comprehensive introduction to Zion’s Fiction: a treasury of Israeli speculative literature (https://locusmag.com/introduction-to-zions-fiction/) suggests that many countries in the thrall of profound post-industrial, scientific and technological flux turn to science fiction (SF) to inure themselves from societal vertigo. If this recalls Alvin Toffler’s popular tract, “Future Shock”, it’s not by happenstance. However adamantly the writers who got into the business following its publication in 1970 might reject this lineage, it’s baked into the genre.

But then there’s the case of Israel SF.

It is also no accident that during the last couple of decades, the Jewish State has earned a trillion-dollar reputation as the “Startup Nation.” Which belies the question of how a minuscule state of 8 million souls lacking in natural resources and beset by never-ending war and internal strife generates more successful start-ups than any other single country outside of the United States. For some insight into this almost unfathomable transformation, buy a copy of Dan Senor’s titular book. For a sense of how this shifting of technological plates continue to reverberate within the Israeli psyche, though, Zion’s Fiction may be the ticket.

The acclaimed science fiction writer Larry Niven recently informed the editors that the stories presented in the anthology skew a tad differently than many of those contained in many other compilations published in the western world. Indeed, he once told co-editor Emanuel Lottem that he simply doesn’t know how to scare Israelis.The noted SF critic Gary Wolfe for his part, has contended that Israeli SF reflects “the ongoing fears of invasion, the dangers of being swallowed up by the past, and an abiding respect for the survival value of education.”

One of the editors, Sheldon Teitelbaum, suggested in a recent e-mail interview that most of the SF published outside of Israel tries to distill the future through the prism of the present. Israeli writers, for their part, seem less preoccupied with crafting alternate futures than alternate presents. Given the precarious and often harsh conditions so many Israelis must contend with, this seems natural. But, not to put too fine a point on it, and in agreement with Wolfe, they frequently feel obliged not only to bridge the present and the future but the past too. Thus, in their comprehensive introduction, the editors declare that the Jewish State is the only nation star in the planet’s history to be founded on not one but two seminal works of fantasy — the Hebrew Bible and Zionist Ideologue Theodore Zev Herzl’s 1902 utopia, Altneuland (Old New Land.)

As an example of this preoccupation, take the celebrated Israeli writer Savion Liebrech’s profoundly disturbing neo-novella, “A Good Place for The Night”, which superimposes echoes of the Holocaust on a surreal word reminiscent of Alex Garland’s film, Annihilation. Or, for that matter, Elana Gomel’s “Death in Jerusalem,” in which a mortal woman marries Death, and must deal with his other-worldly friends and family.

My favorite story, however, is “The Believers” by Nir Yaniv, a kind of What If? parable about a world in which you are punished for Biblical transgressions by a vindictive and ever-watchful God. In this universe, and as in normative Judaism, you can think whatever you want. Act upon any of the transgressions you imagine, though, and you’ll find yourself turned inside out, split in two, or any other grisly fates best left to the imagination.Given the Jewish propensity to argue with and even disobey God, a coterie of rebellious Jews who decide they won’t take this shit any more mount an angelic assault on his throne.

If this sounds excessively grim — and several of these stories feel like a kick in the head — there are others that are hilarious. Nitay Peretz’s “My Crappy Autumn,” which chronicles the misadventures of a depressed stoner (his job sucks and his girlfriend left him) whose roommate is beckoned by a flying saucer that has banked by Tel Aviv’s Yarkon River, declaring him the Messiah. Or Mordechai Sasson’s period piece, “The Stern-Gerlach Mice,” about the invasion of the Ultra-Orthodox Jerusalem neighborhood of Mea Shearim by transdimensional rodents.

For all its considerable accomplishments, the history of Israeli SF — what the editors cheekily describe as “Zi-Fi”–  passes over the body of children’s literature and comic books that provided a gateway into the genre for many fans and even writers. What else is missing? The cousins are nowhere to be seen, so to get that side of the story you should also check out “Palestine + 100: stories from a century after the Nakba”(Comma Press).

But there you have it — Zion’s Fiction an otherwise great sci-fi anthology designed to appeal not just to those interested in the current state of Israeli fabulation but to those looking for the literary equivalent of one of those legendary Israeli breakfasts everyone raves about.

About the Author
Fawzy Zablah's maternal grandmother Elena was born in Bethlehem, next to the Church of the Nativity but raised in El Salvador. He in turn was born in El Salvador but raised in Miami. Among his works is the short story collection CIAO! MIAMI and the novel RARITY OF THE CENTURY. His fiction has been published widely at Hobart Pulp, 3AM Magazine, Expat Press, and the Acentos Reivew. His short story, THIS MODERN MAN IS BEAT, was adapted into an award winning short film in 2015. He is hard at work on a novel about the Arabs and Jews of Latin America with the working title of GITANES.
Related Topics
Related Posts
Comments