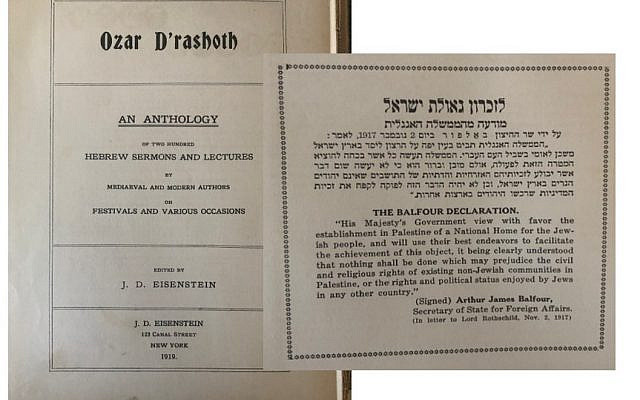 Cover Page of Otzar Derashot and inside cover page, 1919. (Photograph by author)

“A dream that doesn’t outlive the dreamer is probably not a dream worth achieving.”[1]  I thought of these words on Erev Rosh Hashana, when I met an 88-year-old man with a serious heart condition, hovering between life and death.  We will call him David. An accomplished professor of environmental studies and energy policy, David had traveled throughout the world advising countries on their energy needs.  Even in his advanced years, David continued to teach in his native New Mexico, and recently became an official advisor to the Navajo nation, a rare honor to confer to a Jew from New York.  Stating he ‘never was a religious man,’ David told me he had taken up studying Talmud online and loved connecting with Jewish tradition.  When asking about the Ukraine-Russia war, he began a lecture about his work with former Eastern Bloc countries.  He pushed through his the pain and belabored breathing, wanting to convey to me his perspectives on the world.

A day later, on Rosh Hashanah, his heart let out and he died.  In speaking with a colleague of his by phone, he mentioned that his friend had told him he was not ready to die.  David still had work to do!  He bemoaned the fact that some of his life work would now remain forever incomplete.  In the one hour I spent with him, only a day before his death, I sensed the same thing as his colleague.  I responded.  “For a person like David, I could imagine no other conclusion to his life story.  David’s life by definition could only end this way.  For people like David, their work is never done.  Not in one lifetime, or in many lifetimes.”

This week’s parashah read on Simchat Torah, Zot Heberacha, concludes with the death of Moses in the final chapter of the Torah.  Upon reflection, the Torah’s concluding verses are unsettling, perhaps even unsatisfying.  Moses dies in an unmarked grave, and his life’s dream to bring the Jewish people into the land of Israel, is unfulfilled.   If the events of his early life are marked with fanfare- tales of splitting seas and fiery mountains, his life ends in a silent mountaintop, completely alone.  However, unlike a fairy tale, when the characters live happily ever after, the anti-climactic conclusion of the Torah is instructive, teaching us what living a great life actually means.

When Moses dies, Moses is keenly aware that his goals remain unachieved.  His ‘swan song,’ read in last week’s parashah is sobering (Ha’azinu).  He tells the people they will inherit the land of Israel, and they will receive its blessings, and then they will spurn God.  They will act unjustly and ultimately be exiled from the land.  Only at a later unspecified time will they return.

In a poignant passage, the rabbis expand upon Moses’s final ascent to the mountain of Nebo, where God ‘shows him the land’ promised to the Patriarchs (Deut. 34:1).   According to the midrash, Moses does not only see the physical valleys, hills, and streams.  He prophetically sees into the future.   He sees the land ‘in its success as well as its ruin’ (Rashi, ibid).  Playing on the etymological similarity between Yam/ sea and Yom/day, Moses not only gazes upon the Mediterranean Sea, the Yam HaAcharon, but also sees Jewish history until the Yom HaAcharon, the end of time.

This image is sobering.  Moses realizes that the people will not in his lifetime, nor in any near future, realize the vision he had for them.  Success will be provisional at best.  They will ultimately fail to fulfill the mandates of the covenant.  In fact, the entire Bible will conclude on the same note, as the Bible ends with the destruction of the Temple and the subsequent exile, seen as punishments for their religious and moral corruption.  The last books of the Bible, Ezra-Nehemiah are the beginnings of an attempt to return, to restore that which is lost.  That story, the story of the Second Temple, will again end in corruption and ultimately failure.  Micah Goodman in a lecture on Deuteronomy makes a striking observation; the book (and by extension the Torah itself) sets out a revolutionary vision of a people.  The vision absolutely fails.

On the one hand, as he is dying Moses realizes that despite all his tireless effort, he has failed.  The hearts of those he has led have not been circumcised or transformed.  If Moses himself cannot change the human heart, how can we imagine we will be more successful?

Yet, there is another conclusion to the book of Deuteronomy, one that provides perspective.  The Torah is emphatic that Moses died on Mount Nebo because of God’s unalterable decree (Deut. 34:5). Lest one think that at the hoary age of 120 years Moses’ life force simply gave out, the text is emphatic to emphasize that “his eyes were not dim, nor had his vitality (literally moisture) abated”.  The midrash curiously adds that his eyes were not dim ‘even after death’ (Sifrei 357:34).  The most important of the senses, the eyes, are here seen to continue to see even after death.  Similarly, unlike people who die and their skin shrivels, Moses’ skin remained fresh.  While one might want to argue this was a special miracle afforded to Moses, that he did not suffer the scourge of decomposition, I believe the midrash is pointing to a deeper truth.   The midrash is in fact saying Moses both died and did not die.  Yes, his physical body was interred, but his persona lived on.  To this day in yeshivot, Moses is referred to as Moshe Rabbeinu, Moses our teacher.   The gift that God afforded Moses was the ongoing capacity to inspire future generations with his vision.   In this sense, he lives beyond his death.

Despite Moses’ understanding that his vision was not to be realized in any near future, the rabbis are teaching that he did not succumb to despair.  Great people realize that their dreams can never be accomplished in one generation, or even many hundreds of generations.  Leadership is the capacity to plant seeds for the future.

A few years ago, our chaplaincy program embarked on a program to bury thousands of Jewish books.  (According to Jewish tradition, books with God’s name in them must be discarded respectfully and allowed to naturally decompose.) Local Jewish agencies as well as synagogues had thousands of books, many of them outdated prayer books that were no longer used. For one month people could come to the Miami Jewish Federation and take whatever books they wanted, and what remained was buried in a large grave.  I led a small group of rabbis and volunteers.  We gathered for this meaningful ceremony, and we said a few prayers.  As I was about to bury a pile of books, I noticed a very worn book with an interesting Hebrew name on the binding, Otzar Haderashot, and anthology of sermons.  This work, by the early twentieth century American Hebraist and scholar, J.D. Eisenstein, collected hundreds of sermons over the millennia. Flipping through the pages, I realized that what I had here was a treasure, and there was no way I was going to bury this book, even if the binding was falling apart. The book contains inspiration and ideas over the millennia, and I have referred to it even during this year’s high holidays.

I noticed the publication date of 1919.  Turning to the inside page I was astonished.  Eisenstadt randomly published in Hebrew and English the words of the Balfour declaration of 1917, expressing the support of the British government for the Jewish people to establish a homeland in mandate Palestine.  Given the subsequent one hundred years of Jewish history, it is difficult for me to imagine Eisenstein could have foreseen either the darkest period in Jewish history, nor the unimaginable success that is the State of Israel.  Yet, I also imagine that his hopes for the future were fueled by the values of the past, the very values he collected in this book of sermons.  His hopes for the future were long term, just like those who came before him.

For me, there was profound poetry in this fortuitous book acquisition.  In lifting this lifeless book from the grave, it was as if I was raising up the hopes and dreams of those who came before me.  In the inside cover of an old book from a world that is no longer, I was reminded that to be a Jew is to envision and dream for futures that have not arrived.   Like Moses, Eisenstein understood even after two thousand years that the vision for a better future had not been dimmed.  Eisentstein died in 1956, having seen the beginning of a new state flowering, a new beginning for the Jewish people.  Moses told the people they would fail and be exiled, but they also would ultimately return.

In management, we often talk about deliverables.  “Was the goal achieved?”  In certain respects, the utopian views of the Torah for the Jewish people in particular, and the world in general, are often ‘just beyond the Jordan.’  They can never be delivered. They reside in an idyllic land, which can never be actualized, and perhaps never will be.  Perhaps the key to being a Jew is the capacity to stand upon the threshold of the land, cast one’s eyes beyond the river, and see a promised land in the mind’s eye,  never tiring from that vision.  In the end, there is a tragic dimension in all of this, knowing that the promised land seems always beyond reach. Yet, the capacity to dream futures yet unrealized and not succumb to the feelings of futility and cynicism is nothing less than heroic.  Moses embodies this heroism, and in one respect he was incredibly successful: he was able to transmit this same capacity to his descendants and his descendants’ descendants.

Moses died never having realized his dreams, but his eyes were never dimmed nor was his vigor abated.  Nor were the eyes and vigor of his children.  Nor each of us.

[1] I heard these words in a Hartman Institute lecture delivered by Yehuda Kurzter in the Hartman Rabbinic Institute in the Summer of 2022.