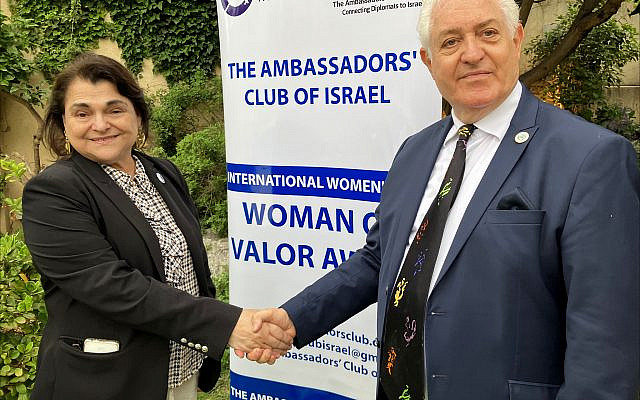 About 80 people gathered May 2 in suburban Tel Aviv to mark International Women’s Day, in an annual ceremony delayed for the second year in a row due to the pandemic.

Not a single mask was in sight at the evening poolside celebration, held at the Herzliyya Pituah home of author and art historian Olessia Kantor. An unseasonably cool breeze chilled the evening air as Yitzhak Eldan, founder and president of the Ambassadors Club of Israel, presented 14 foreign diplomats and three locals, including Kantor, with “Woman of Valor” certificates.

“All of these women represent excellence in their professions, and are all beautiful examples to follow,” said Eldan, Israel’s former ambassador to Denmark, UNESCO and the Council of Europe. “They serve as inspiration to other women striving for success, and their achievements are proof that diplomacy and politics must not be dominated by men.” 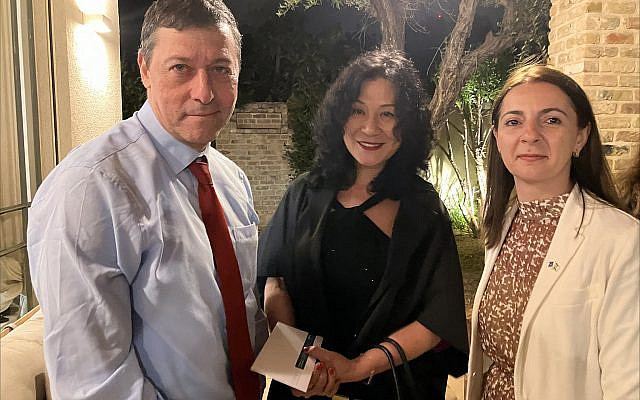 From left: Dan Oryan, Israel’s former ambassador to North Macedonia and chief of the Foreign Ministry’s Balkan division; writer and educator Andrea Yip; and Ines Demiri, chargé d’affaires at the Embassy of Kosovo in Jerusalem. (Photo by Larry Luxner)

Added Martin Mwanambale, Zambia’s ambassador in Tel Aviv and dean of Israel’s diplomatic corps: “This event should have taken place on International Women’s Day [March 8], which itself was created to recognize all that women have achieved against the backdrop of abuse and discrimination. So these awards are also sort of a correction to the wrongs that women have suffered in the past.”

The festive atmosphere was a marked change from last year’s International Women’s Day event in Holon, where the theme was “Achieving an equal future in a COVID-19 world.” 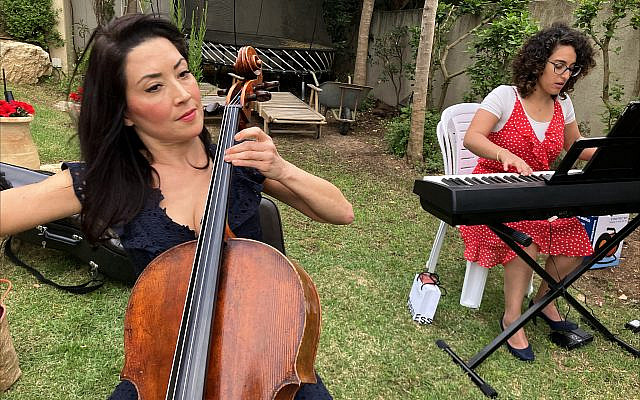 “We want to play something that reflects the spirit of Holocaust Remembrance Day that just passed, as well as Yom HaZikaron [Memorial Day] and Independence Day,” said Cooper, a visiting professor at Tel Aviv University’s Buchmann Mehta School of Music and vice-chair of the America Israel Cultural Foundation.

“So that song is in honor of Sugihara, the Japanese vice-consul who saved so many Jewish refugees’ lives—including the father of my husband—by issuing transit visas at great risk to himself and his family because they were not sanctioned by his government,” the cellist explained.

More female ambassadors than ever before

Interestingly, women now head 19 of the 92 foreign diplomatic missions currently in Israel. Notably, that includes Guatemala and Kosovo, two of only four countries—along with the United States and Honduras—which maintain their embassies in Jerusalem instead of Tel Aviv. 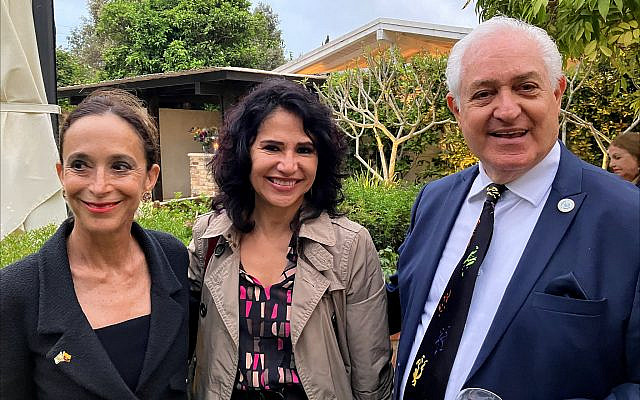 From left: Ambassadors Helen Deller Klein of Ecuador and Margarita Eliana Manjarrez Herrer of Colombia, and Yitzhak Eldan, founder and president of the Ambassadors Club of Israel. (Photo by Larry Luxner)

Speaking on behalf of the ambassadors’ group—which was clearly dominated by the large number of female diplomats from Spanish-speaking Central and South America—Suzana Gun de Hasenson of El Salvador thanked Eldan for the honor. 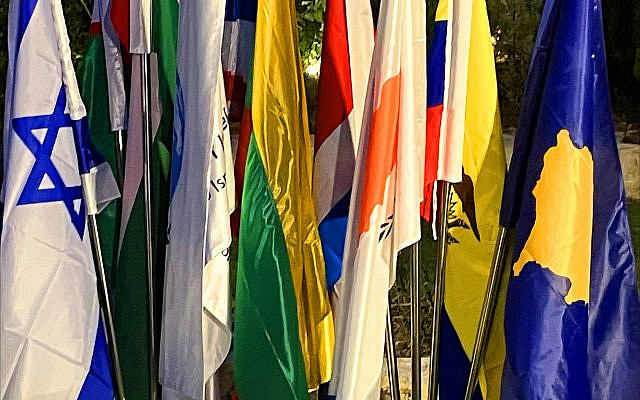 Flags on display at the International Women’s Day celebration May 2 organized by the Ambassadors Club of Israel. (Photo by Larry Luxner)

“The ‘Woman of Valor,’ eshet hayil in Hebrew, is a 22-verse poem found in Proverbs 31, which describes the qualities of the ideal Jewish woman. It is said that Abraham wrote the poem for his wife, Sarah. Apparently, he must have liked her cooking,” joked the ambassador from El Salvador, who’s currently serving her second stint here in Israel.

“Today’s woman of valor alone determines her own worth, seeks adventures in her life and lights her way down any path she chooses. And if she chooses the path of diplomacy and becomes an ambassador, she has definitely made it.”

Even though 79.3% of the world’s ambassadors are men, she said, “as the number of female ambassadors seems to be increasing, this may not be true much longer.” Indeed, 40 of the 187 ambassadors posted to Washington, D.C., are women—the highest number in American diplomatic history. 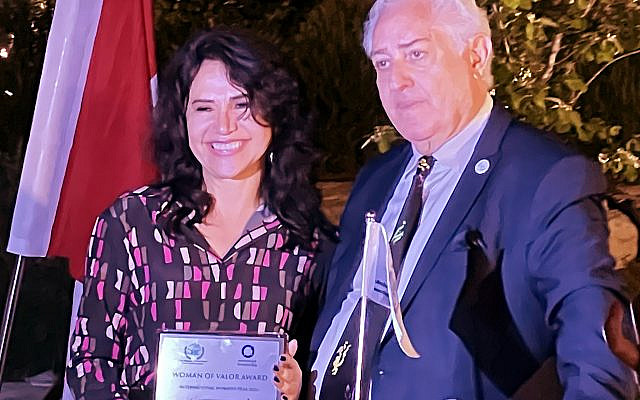 But that’s not good enough, said Fleur Hassan-Nahoum, the deputy mayor of Jerusalem, who also received a “Woman of Valor” award along with Noy Hadas, owner of the fresh fruit and vegetable produce chain Noy HaSade.

“Women are better bridge-builders. It’s natural for us,” she said. “But I won’t be happy until 50% of the diplomatic corps are women,” said Hassan-Nahoum, the London-born mother of four who grew up in Gibraltar; her father, Sir Joshua Abraham Hassan, was chief minister of the tiny British colony on Spain’s southern tip.

“I’m very proud that here in Israel, we gave women the vote even before we were a country. At the first Zionist Congress in 1894, Theodor Herzl put forward the idea that in a Jewish state, women would be able to vote,” she said—making it the first organization in the world to do so. 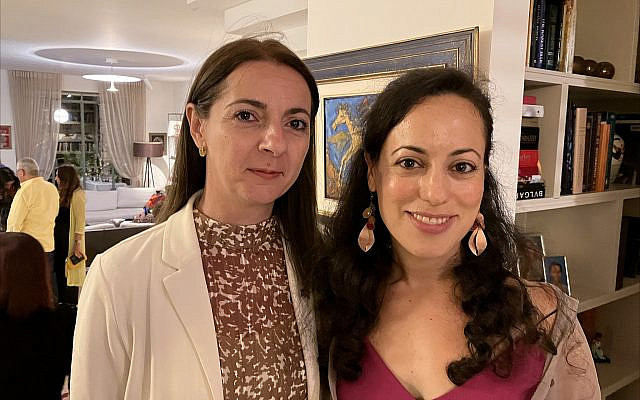 Ines Demiri, chargé d’affaires of the Embassy of Kosovo in Jerusalem, and Reut Portugal, director of external relations for the Ambassadors Club of Israel. (Photo by Larry Luxner)

In 1969, when Golda Meir took office as Israel’s prime minister, she became one of the world’s first elected female heads of state. Yet huge challenges remain, said Hassan-Nahoum, who among other things recently established the Israel-UAE Business Council as well as the Gulf Israel Women’s Forum.

“We have fallen behind, because only 27% of Knesset members and fewer than 20% of local government officials are women. And yes, it’s very nice that 20% of the diplomatic corps here are women, but that’s not good enough. Until 50% of those at every single decision-making table are women, we will not have a better world,” Hassan-Hahoum said. “That’s why we must continue strengthening the diplomatic corps as a female endeavor—because we’re simply very good at this.”