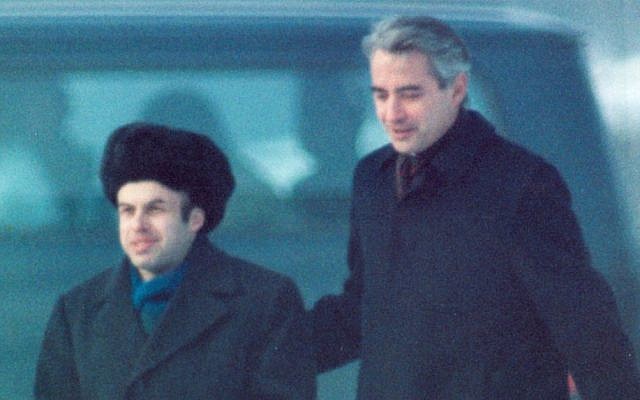 Natan (Anatoly) Sharansky is escorted by US Ambassador Richard Burt after Sharansky had crossed the border at Glienicker Bridge on Feb. 11, 1986 at the start of an East-West spy and prisoner exchange in Berlin. (AP Photo/Heribert Proepper)

The bridge was Glienicke Bridge, of Steven Spielberg’s “Bridge of Spies” fame. When my father walked onto it he was a prisoner in the Soviet block, though a free man in spirit. He found freedom on the day he stopped hiding his opinions. He earned freedom as he fought for his right to be a Jew in Israel, and for his fellow Russians’ human rights. He preserved it as the KGB imprisoned his body, trying and failing to force him to recant.

After nine years of imprisonment, my father stepped off Glienicke Bridge, and became a free man in body as well.

He finally left the USSR behind him, and had my mother, and Israel, ahead. 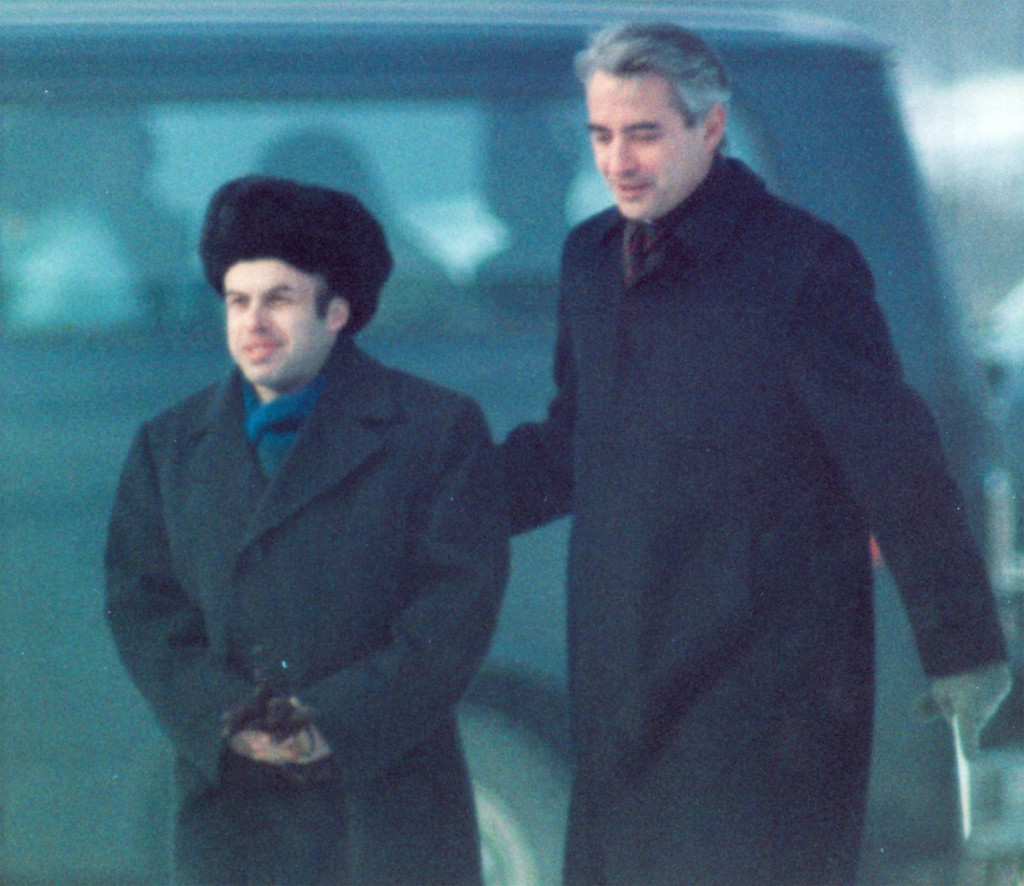 Natan (Anatoly) Sharansky is escorted by US Ambassador Richard Burt after Sharansky had crossed the border at Glienicker Bridge on Feb. 11, 1986 at the start of an East-West spy and prisoner exchange in Berlin. (AP Photo/Heribert Proepper)

Every year, on this day, my family gathers for a private “seder” of sorts. My father wears the kipa a fellow inmate made for him. He pulls out the little Psalms book that was his companion in prison. And like the children on Pesach, we ask questions to celebrate this exodus. When we were younger, my sister and I mostly wanted to understand what “prison” was, and were there animals there, perchance? But as we grew and matured, our questions expanded with us. How did you find the strength to go on, Ima and Abba? And how did you survive the shock of normal life, once restored?

A lifetime of questions wrought a curious effect: While I’ve never seen Glienicke Bridge with my own eyes, and I naturally couldn’t see any of the struggle for myself, I feel like I did. Glienicke is ingrained in my blood, in the inner geography of the self. There, right there inside me, it spans over decades and pain. Archipova Street, where my parents first met, is behind it. A little to the side, I can glimpse Vladimir Slepak’s Moscow apartment, and the moment of my father’s arrest.

Somewhere within me stands a lit room in Rabbi Zvi Yehuda Kook’s Jerusalem apartment. It’s dark outside, but the rabbi is up. Far, far away, the Soviet authorities are plotting to accuse my father and his comrades in arms of treason and espionage. My mother’s mentors, Rabbi Tzvi Tau and his wife Hannah, brought her to talk with Rav Kook. Standing in the little lit room, surrounded by his students, the elderly rabbi screams.

“Our brothers in Russia are in danger,” he yells. “We must fight for them.” Plans are made, and the base of my mother’s future struggles is formed, right there in the little room. This group will come to be known as “I am my brother’s keeper,” the headquarters of a decade-long campaign.

“But Rabbi,” exclaims one of the students, “what about learning Torah? Wouldn’t this struggle cause bitul Torah?” The rav slams his hand on the table. “He who does not know when to close the books,” he thunders, “shouldn’t open them in the first place.”

My inner map breaks into many different alleys at this point. To the left lie the various two-room apartments that hosted the headquarters of the struggle in the following years, right there in people’s private homes, between growing children and domestic routines. To the right lie the people who embraced the cause abroad. I can see my mother marching with them, talking with them, asking and accepting their help. I can see her sleeping on countless couches in people’s homes from Vancouver to Brussels, from Paris to New York. I can see them embracing her and giving her strength.

Ahead lies a different kind of struggle. Far, far removed from the clamor of demonstrations and phone calls and speeches, my father sits in a cell, fighting a lonely war. “Recant,” press his gaolers. “Recant, and you can leave.”

In recent years, our children started asking the questions. Animals became prominent again, as did the diet in prison and and my father’s book of Psalms. I watch them walking the same paths we did as children, their eyes wide with wonder as they form their own inner geographies. But first, before the questions begin, we make sure to tell them the basic story: Bad people didn’t want Saba to come here, so they locked him in a little room. Savta yelled, “Let Saba come to Eretz Yisrael,” but they didn’t listen to her when she yelled alone. So Savta went all over the world, and because “all Israel are responsible for one another,” Jews everywhere started yelling with her. They yelled so loud, and for so long, that the bad people had to let Saba, and his fellow Jews in Russia, come home. 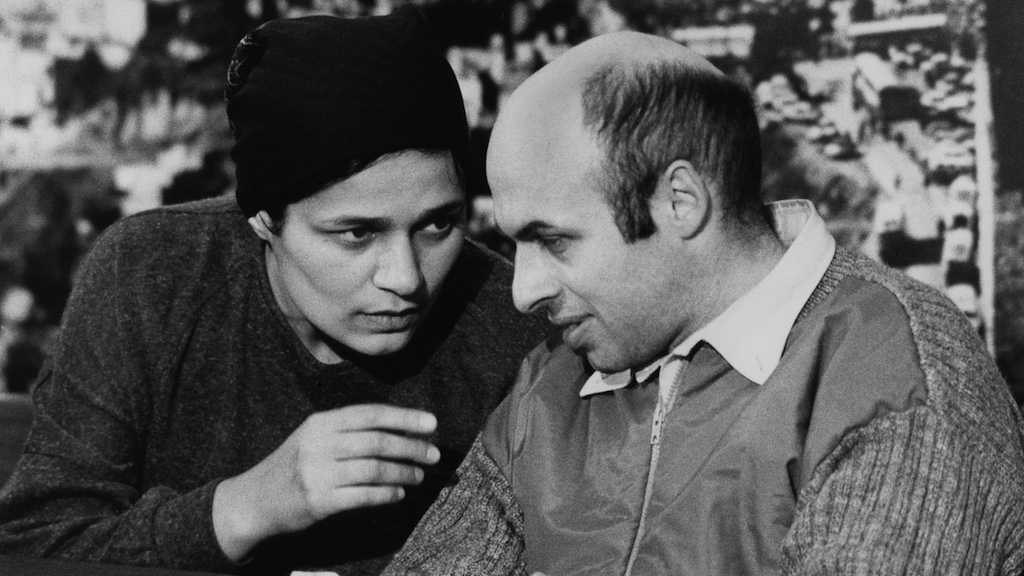 Former Soviet refusenik and prisoner, Israeli politician, human rights activist and author Natan Sharansky with his wife Avital after his release from prison in the Soviet Union. He landed in Israel on February 11, 1986 (Moshe Shai/FLASH90.)

As my parents’ daughter, I am forever aware that I owe my existence to the people who yelled with my mother. I wouldn’t be here today if you, the Jews of the world, wouldn’t have opened your hearts and your homes and your purses. You marched in rallies, sent letters to your representatives, paid my mother’s tickets as she flew from one demonstration to another. You hosted her. You encouraged her. Your yells broke through the Iron Curtain. They broke into my father’s cell long before they broke him out of it. And they broke into my inner geography, where they ring and echo to this day.

I want you to know that I remember, and that I am grateful. I want you to know that when I saw my parents playing with their grandchildren near Lefortovo Prison several years ago, it was your victory that made me almost dance with joy. Thirty-five years earlier, my father’s KGB investigator told him that “we don’t let heroes leave Lefortovo alive.” You, the Jewish People, proved him wrong.

Your spirit and strength in those years freed a man, and brought an empire to its knees. When I feel tired, when I fear for the future, when we squabble and fight within ourselves, I go back to your echos inside me, and find hope.