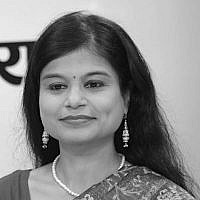 The Blogs
Bharti Chhibber
Professor (Asst.) of Political Science, India, Author, International Affairs Analyst, Environment Expert
Apply for a Blog
Advertisement
Please note that the posts on The Blogs are contributed by third parties. The opinions, facts and any media content in them are presented solely by the authors, and neither The Times of Israel nor its partners assume any responsibility for them. Please contact us in case of abuse. In case of abuse,
Report this post.

As India celebrates 75 years of Independence, we are also commemorating 30 years of establishing full diplomatic relations with Israel. India-Israel friendship has moved ahead from recognising Israel in 1950 to full diplomatic ties in 1992 to multifarious strategic cooperation and Dosti in contemporary times. The significance of India-Israel bilateral collaboration can be gathered from the congratulatory messages and good wishes on social media by the respective head of the governments and joint op-ed in the newspaper by the foreign ministers of the two countries focusing on friendship and trust as real assets with two states deepening their roots.

Indian Prime Minister Narendra Modi emphasised on the cooperation between the two countries as part of their growth process and more milestones to be achieved in the future. Israeli Prime Minister Naftali Bennett highlighted gehri dosti and commitment to a strong friendship. Israel’s Ambassador to India Naor Gilon also reflected on the next 30 years of enhanced India-Israel relations. India’s Ambassador to Israel Sanjeev Singla and Ambassador of Israel to India Naor Gilon also unveiled a commemorative logo in an online program which features symbols of respective national flags the Ashoka Chakra and the Star of David which forms the numerical 30 to project the 30th anniversary of bilateral relations. Beautiful visuals of the lighting up of Teen Murti Haifa Chowk in Delhi with Indian and Israeli colours and the illumination of Masada Fortress in the Judean Desert with the flags of India and Israel were mesmerizing.

With India’s change alongside continuity approach under Prime Minister Narendra Modi, India-West Asia dynamics changed. Following an independent foreign policy, it de-hyphenated its Israel-Palestine relations which became the benchmark for enhanced cooperation with Israel. Prime Minister Narendra Modi became the first Indian Prime Minister to visit Israel and our relations are on an upswing. Israel has helped India earlier too by providing heavy artillery and ammunition in the 1971 and 1999 wars with Pakistan. In changing times, not only Israel has emerged as the third-largest defence partner to India, now relations are robust and multidimensional in agricultural, counter-terrorism, cyber, economic, defence, political, science and technology, space sectors. India and Israel have created bilateral consultation channels in diverse areas of cooperation both conventional and non-conventional like agriculture, water, counter-terrorism, and defence. Both the states collaborated in Barak-8 or MR-SAM defence systems to upgrade their security mechanisms. Defence technology from Israel adds to India’s much-required deterrent strategy. Moreover, in the domain of healthcare, both have signed an agreement to share knowledge, build climate-resilient infrastructure and work on Green Health care. Israel has also joined India led International Solar Alliance which aims at mitigation of climate change through clean and renewable energy.

At the global level, India is Israel’s seventh-largest trade partner with bilateral trade in varied areas of agriculture, water, IT, telecom, and pharmaceuticals. With enhanced FDI, trade is also expanding. Bilateral merchandise trade has increased to US$ 4.82 billion during April-November 2021 from US$ 200 million in 1992. Moreover, negotiations are also underway for a Free Trade Agreement between India and Israel which will further augment the trade and commerce relations between the two partners.

Israel’s position as a global leader in agricultural technology makes it a crucial partner of India which is a ‘global agricultural powerhouse’ as described by the World Bank. Raising agricultural productivity is a must for food security as envisaged by India. This calls for improved water resources, irrigation and drainage management system. Israel has been facilitating the modernization of India’s agricultural system through its drip and community irrigation technologies. Israel has established 29 Centre of Excellence in 12 states which in addition to producing fruit and vegetable plants, can train 1.2 lakh farmers every year. Of late India has also decided to convert 150 villages into ‘Villages of Excellence’ with technical assistance from the government of Israel.

Technology can be an asset and a menace at the same time. In an era of technological revolution and digitisation, risks of cybercrime, cyber attack, cyberwar have increased manifold. To deal with the threats of the digital world, India and Israel have signed a cyber security pact in 2020. Innovation is the key to growth. Israel with its formidable technology and research capabilities is an excellent partner of India to jointly develop protected systems against cyber-attacks on civilians in line with its Atmanirbhar Bharat enterprise. Israeli President Isaac Herzog also pointed out last year that the two democratic countries can jointly steer the world in the sphere of innovation for the global benefit.

India and Israel also share long cultural and civilizational connections. India has always welcomed and respected Jews community and likewise, there are many Jews of Indian origin in Israel who have distinguished themselves in their respective fields. Additionally, Indian traditions of Yoga and Ayurveda are admired in Israel and the International Day of Yoga is celebrated with ardour on 21st June every year since its inception.

Looking at the broader geopolitics, Israel, UAE and Bahrain signed the Abraham accord in 2020 to normalize relations in West Asia. This initiates a phase of easing tensions and realignments in the region and at the same time provides an opportunity for India to play an enhanced role in West Asia. A trilateral partnership among India, Israel and the UAE or a quad of economic collaboration will go a long way in making India a major actor in the region.

We are living in a constantly changing and evolving global order. Appreciation, camaraderie, and warmth are the keywords in India-Israel affinity in contemporary times. India and Israel’s partnership is surely set to rise further in the coming years and decades.

About the Author
Dr Bharti Chhibber is an expert on Israel and is teaching foreign policy at the University of Delhi, India. She is a well-known academic, author, socio-political analyst and an environmentalist working, extensively writing and speaking globally in different parts of the world for many years in the field of India-Israel relations, Middle East and international relations. She has published books and more than 150 research papers and articles to her credit. She has been felicitated with many awards, fellowships and is regularly invited as a subject expert in electronic and print media interviews.
Related Topics
Related Posts
Comments