The Blogs
Calev Michael Myers
Apply for a Blog
Please note that the posts on The Blogs are contributed by third parties. The opinions, facts and any media content in them are presented solely by the authors, and neither The Times of Israel nor its partners assume any responsibility for them. Please contact us in case of abuse. In case of abuse,
Report this post. 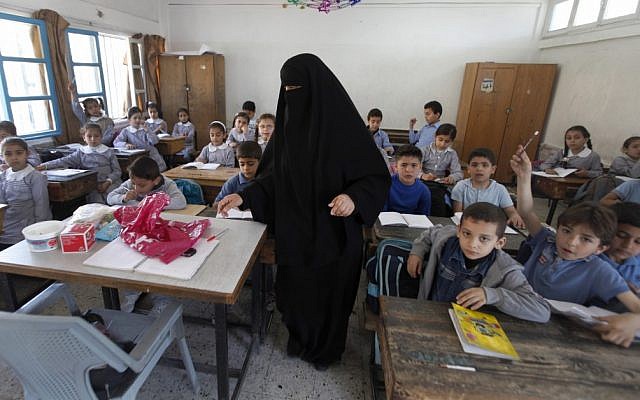 Palestinian children attend a class at the UNRWA elementary school in the Shati refugee camp in Gaza City, in April 2013. (AP/Hatem Moussa/File)

American taxpayer money is wasted on UN programs, such as the UN Relief and Works Agency for Palestine Refugees (UNRWA), for which the United States remains the single largest donor of any country, having given $380 million toward a nearly $1 billion budget in 2015.

Despite billions of dollars in aid over the past six decades, there has been little improvement in the lives of Palestinians under UNRWA’s care. Some 65 percent of Palestinian refugees live in poverty, which worsened for some in Gaza after Israel’s withdraw in 2005; the refugee infant mortality rate stands at nearly 22 percent; unemployment in Gaza reached nearly 30 percent in 2011. But five issues, in particular, undermine the rationale for its very existence:

A Palestinian-only refugee agency is legally unsound and morally unjust. Indeed, all other refugees around the world –‒ 130 million since World War II ‒‒ are cared for under the Office of the United Nations High Commissioner for Refugees (UNHCR). UNHCR has a specific mandate to integrate refugees into the country where they reside to avoid creating generations of people dependent on foreign assistance. UNRWA does just the opposite by applying refugee status to third and fourth generation Palestinians who were never displaced. As a result, the number of “Palestine refugees” grew from roughly 700,000 in 1950 to over 5 million today.

UNHCR avoids employing aid recipients to escape conflict of interests, whereas UNRWA is staffed mainly by Palestinians and those with an interest in maintaining and growing the system. Making matters worse, an overstaffed UNRWA employs one person for every 182 Palestine refugees registered by UNRWA, compared to UNHCR’s one staff member for every 5,500 refugees.

Approximately 2 million Arab Palestinians live in the area west of the Jordan River, including the West Bank and the Gaza Strip, and are registered by UNRWA as refugees from Palestine. The problem is that these refugees cannot be considered refugees from Palestine since they already live in the Palestinian Authority; the vast majority of them were born in their current place of residence and were never displaced.That twisted logic has now allowed thousands of Syrians of Palestinian origin to register with UNRWA, despite the fact that the majority of them were born in Syria and lived there as citizens until civil war displaced them. Meanwhile, tens of thousands of other Syrian refugees not of Palestinian origin receive no such preferential treatment.***

UNRWA textbooks are based largely on Hamas ideology and systematically indoctrinate students in violent jihad. Their schools also periodically hold ceremonies to honor “shahids” or those who have carried out terrorist attacks. Even the UNRWA schools in Gaza were revealed to have been used as munitions storage for Hamas on three different occasions in 2014. In one instance, UNRWA officials simply handed confiscated missiles back to Hamas.

The Hamas faction has won the last three elections for the employees’ committee within UNRWA, meaning most employees are members of or support Hamas. That poses a significant problem because, among other issues, Hamas Political Bureau Chief Khaled Mash’al admitted that Hamas often reallocates for military use large amounts of donations intended to rebuild civilian infrastructure.

The US government must rethink funding UNRWA. Representative Ileana Ros-Lehtinen (R-FL) began the process with the 2014 UNRWA Anti-Terrorism Act. But US officials could go one step further by refusing to renew UNRWA’s mandate when it expires in June 2017, and by giving UNHCR responsibility for Palestinian refugees. All UNRWA operations west of the Jordan River could then be transferred to the Palestinian Authority.

American taxpayers and the average Palestinian have virtually nothing to show for the millions provided to UNRWA. The U.S. government and others must demand new solutions.

*** The UNRWA spokesman said in 2011 that descendants retain status until “achievement of a just and lasting solution.” He fails to define how to achieve this unspecified solution. For more information see “Exploding the myths: UNRWA, UNHCR and Palestine refugees,” maannews.net, June 27, 2011.

The above was written by David Grantham and Calev Myers.

Calev Myers is a partner at Yehuda Raveh & Co. Law Offices and the Founder of the Jerusalem Institute of Justice.

David Grantham, PhD, is a senior fellow with the National Center for Policy Analysis in Dallas, Texas.

About the Author
Calev Michael Myers is the President and Executive Chairman of ARISE - Alliance to Reinforce Israel's Security and Economy (ARISE) and the Deputy President of the International Association of Jewish Lawyers and Jurists (IAJLJ). He is also a Senior Partner at Yehuda Raveh & Co. Law Offices (YR&Co.). The opinions expressed in Calev's blogs may not necessarily reflect the opinions of the IAJLJ, ARISE or YR&Co.
Related Topics
Related Posts
Comments