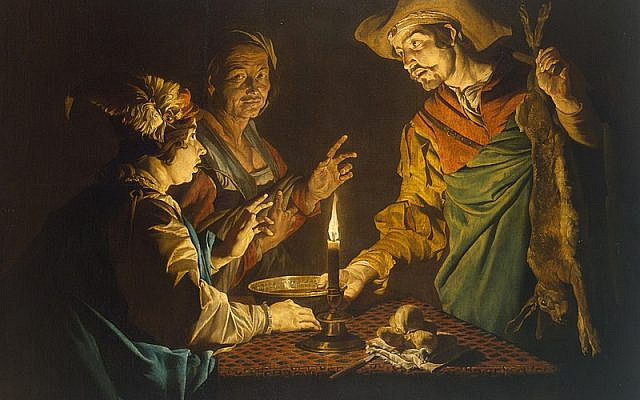 Parashat Toldot tells the story of two twin brothers, the sons of Isaac and Rebecca: Esau and Jacob. The parasha opens with a pregnant Rebecca, in much discomfort.

And the sons struggled inside her and [Rebecca] said, “If it be so, why am I this way?” And she went to enquire of the Lord.

And the Lord said to [Rebecca], “Two nations are in your womb, and two kingdoms will separate from your innards, and one kingdom will become mightier than the other kingdom, and the elder will serve the younger.”

After Hadrian, King of Edom conquered the world, he returned to Rome and said to his officers: “I want you to make me a god, since I have conquered the whole world.”

They replied: “But you have not yet established your rule over his [God’s] city and his house.” He then destroyed the Temple, exiled Israel, and returned again to Rome. He said to them: “I have now destroyed his house and burned his Temple and exiled his people. Make me a god.”

TheTorah.com author, Dr. Malka Zeiger Simkovich, who holds a Ph.D. in Second Temple Judaism from Brandeis University, an M.A. in Hebrew Bible from Harvard University, and a B.A. in Bible Studies from Yeshiva University’s Stern College, cleared up the problem of having Hadrian being the one who destroyed the Temple. She writes, “Tanchuma here conflates the Great Rebellion against Rome, which led to the destruction of the Temple in 70 C.E., with the Bar Kokhba Rebellion sixty years later, and thus makes Hadrian—not Vespasian or Titus—the destroyer of the Temple.”

Edom, written, ‘אדום’ is the Hebrew word which was written, originally in Arabic script, by one Rabbi Judah HaLevi, author of Sefer Kuzari (c.1120 – c.1140 A.C.E), to signify the Christian Church, instead of using the word: ‘nostrim’ or ‘נוצרים’ to denote Christian people, as they do in the contemporary Hebrew vernacular, such as the Israeli tongue. That Europe was once the Roman Empire, and then it became almost unanimously Christian, suggests again the veracity that the nation of Edom, coming from Esau, is indeed the Empire and the Church.

What I have ascertained upon much thought on the matter is that while Esau is said to be a hunter of wild game, and an alpha-male character, he carries within him, a weakness gene or trait, which is passed down onto all the nation of Edom. This is evident from the scripture of the Roman Empire and the scripture of the church.

The Trojan War (c. 1194-1184 B.C.E) was fought between the Trojans of Troy, and the Achaeans (Greeks, Spartans). Details of this war are explained in Homeric epic poetry, specifically, the Iliad (800 B.C.E), which tells the story of how upon the ceremonious killing and disfigurement of Hector, the recapturing or rescue of Helen, the wife of the Greek king Menelaus, and the destruction of the city of Troy, the Greeks are victorious over the Trojans. The mighty Trojan warrior Aeneas, second in talent for warfare only to his deceased friend, Hector, wanders away from the battle—and in a break in tradition between Greek and Roman mythology—towards home: the city of Rome.

The Roman Empire’s answer to the Greek epics of Homer, the single most quintessential literature it ever put out, was the epic poem, the Aeneid (29-19 B.C.E) by Virgil. Written, like Homer, in Latin dactylic hexameter, and sequenced en medias res, the poem has been called the ‘national epic’ and the ‘founding myth’ of the Empire. Generally, Virgil picks up where Homer left off. What seems queer is that the archetypal hero of Rome, was a loser, defeated in battle by the Greeks, made to wander in exile, in pain and fatigue, until he founded the empire (on the hills of Romulus and Remus), which would grow-up to physically execute the figurehead, in the next installment of Edom (though, historically, never taking direct responsibility).

How could the story of a defeated hero bring so much power to its readership?

(violent and anti-Semitic content below: viewer discretion is strongly advised!)

Edom’s weakness trait goes even further, upon a careful examination of Christianity. According to Christians, the son of God, the betrayed Jewish Messiah, King of the World, was a martyr who suffered a slow and painful death at the hands of Jews and Romans, and whose last words were not even words of confidence and unflappable piety, but confusion, helplessness and finally, complaint: “Father, why have you forsaken me?”

Despite the fact that, for this, the religion and the scripture holds a very grim and melancholy dimension (citing the flagrant injustice that befalls Jesus in his tragedy), the Church took over all of Europe in the first few centuries of the 1st millennium A.C.E., and then nearly the entire world; and is still the most powerful religious institution on earth.

The sad scripture brings joy and courage to adherents of the faith, the same way that claiming to be from the losers of the Trojan War in a “founding epic” or “myth”, brought courage and happiness to Roman citizens. It is the effects and affect of catharsis from these stories, that creates a purging of sinful behavior, and awakens a sense of loyalty among the demos in the given polis or spiritual institution.

This is the history of the kingdom of Edom. These are the generations of Esau and the weakness trait. Jesus was defeated in the ‘Passion’ story, but on the other side, he rises again, and most importantly inherits Heaven. Aeneas loses his battle, but inherits Rome.

About the Author
Scott (Shlomo) J. Krane has been blogging for ToI since 2012. His writing has also appeared in The Atlantic, Tablet, Ha'aretz, The Jerusalem Post and the Daily Caller, among others. He was a columnist and breaking news editor for Arutz Sheva (2011-2013). In addition to holding a degree in Judaic Studies and a Master's in English from Bar-Ilan University (for which he wrote his thesis on the poetry of American master, John Ashbery), he has learned Judaism at Macon Ha'Gavuah L'Torah in Israel and Hadar Ha'Torah Rabbinical Seminary in Brooklyn.
Related Topics
Related Posts
Comments