The Blogs
Robby Berman
Apply for a Blog
Please note that the posts on The Blogs are contributed by third parties. The opinions, facts and any media content in them are presented solely by the authors, and neither The Times of Israel nor its partners assume any responsibility for them. Please contact us in case of abuse. In case of abuse,
Report this post. 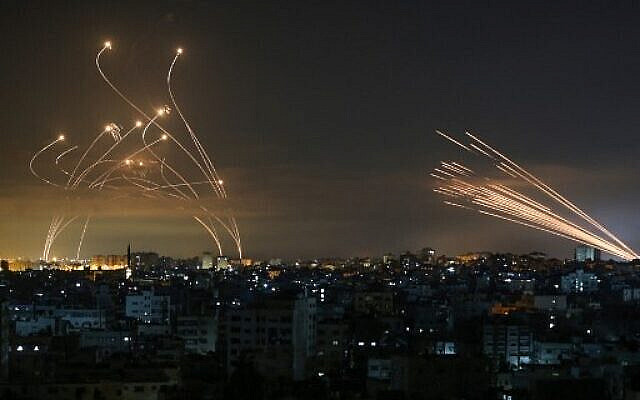 Rockets are seen in the night sky fired towards Israel from Beit Lahia in the northern Gaza Strip on May 14, 2021. (ANAS BABA / AFP)

I often publicly criticize the Israeli government, the IDF, and the Israeli police vis a vis their treatment of Palestinians. So my defense of Israel in this current altercation with Gaza is not a knee-jerk reaction. The following are some of the less than intelligent criticisms of the country in which I live:

1. “More Arabs are dying in Gaza than Jews in Israel so Israel must be using undo force!”
Since when does a scorecard of death indicate how much force is necessary? Many more millions of German soldiers, women, and children were killed in World War II than American soldiers, women and children. Millions! Does this mean that America should not have pressed forward with its attack upon Germany until it surrendered?

2. “Hamas is much weaker than Israel so Israel should not attack it.”
Really? Al Qaeda didn’t have 1/1000 the firepower of America when they attacked the United States in 2001. Should America not have pursued Al Qaeda after 9/11? Are we always supposed to root for the underdog no matter what they have done and no matter what they continue to do? Palestinians have many many legitimate grievances against the government of Israel that need to be addressed, but that does not grant them the right to bomb our cities, killing our people and terrorizing our country.

3. “Israel is purposely killing innocent civilians.”
a) If Israel wants to purposely kill innocent Arabs, they probably shouldn’t be sending the residents of the building that is about to be bombed text messages warning them to exit the building.

c) The death of innocent Arab men, women and children plays on peoples emotions and turns public opinion against Israel. Israel has nothing to gain and everything to lose by causing the death of civilian Arabs. Clearly, it is in Israel’s best interest to avoid collateral damage.

4. “Israel should just stop attacking Hamas because children and civilians are dying as well.”
Hamas continues to launch thousands of missiles into Israel and has so far launched more than 3,000 missiles. What would you like Israel to do in the face of being attacked? Should it bend over and say: “Thank you sir, may I have another”? If you think Israel should stop its attack, what should Israel do in response to the barrage of rockets? Suggestions are welcome below.

5. “Israel has the Iron Dome to protect itself so it shouldn’t respond to the attacks from Gaza.”
If the Iron Dome was 100% effective, I would agree. But it’s not. Hundreds of missile are getting through Iron Dome and are killing our civilians. Israel is obligated to beat Hamas into submission in order to get then to stop launching missiles now and diminish their capability in the future.

6. “Israel is fighting unfairly in that it has disproportionate firepower than Hamas.”
If someone is trying to kill you, your mother, and your children with a knife, and you could reach for a knife or a gun, which one would you reach for? Which weapon do you think is the moral one for you to choose? In a fight, you WANT disproportionate power so you have a clear advantage to overcome your enemy while inflicting the least amount of damage in order to subdue him. If the attacker is not stopping, clearly you haven’t used enough power.

(Alla fikra — by the way — talking about possessing disproportionate power and proportionate use of that disproportionate firepower: it was immoral, unprofessional and simply disgusting for two IDF soldiers to shoot and kill last week a 60 year-old overweight suicidal Arab woman holding a knife. Clearly they could have disarmed her without killing her. The IDF then lied by reporting they only shot her in the legs when they shot her in belly. The IDF then tried to pressure the doctors in the hospital not to reveal the truth to the media. Shame on the IDF!)

7. “Gazans don’t have sirens or bomb shelters while Israel does.”
This fact is very sad and unfortunate and I feel sorry for them. But this is not a moral argument for Israel to stop defending its citizens. And, as I already mentioned, the IDF sends text messages and taps the building doing its very best to minimize civilian deaths. If you want to condemn someone for this situation, condemn Hamas, who uses its money to buy missiles instead of building shelters.

8.”Israel is responsible for the deaths of the innocent children.”
If a bank robber exits a bank holding hostages in front of him as he shoots at other people and the police return fire trying to hit him but accidently, unfortunately, and predictably hitting the hostages, are the police morally responsible for the deaths of those civilians? I think not.

I and the majority of sane Israelis are sincerely sorry that innocent Arab children and innocent Arab adults are dying in this conflict. I can’t stand to see the pictures of the dead Palestinian children. But I’m not surprised because battles that take place in residential areas often have many innocent victims.

The equation is very simple: If you want to stop the death of innocent Arab children in Gaza put international pressure on Hamas to stop launching missiles into my country.