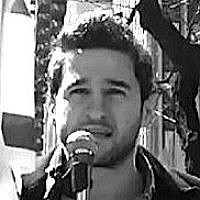 The Blogs
Jacob Kimchy
Apply for a Blog
Please note that the posts on The Blogs are contributed by third parties. The opinions, facts and any media content in them are presented solely by the authors, and neither The Times of Israel nor its partners assume any responsibility for them. Please contact us in case of abuse. In case of abuse,
Report this post.

Thirteen years ago, the world stopped breathing as everyone watched in horror as the Twin Towers were attacked and fell, murdering 2,700 innocent people and leaving hundreds of thousands of victims in its wake and countless others in trauma.

The skyline of New York City changed forever that day, and despite the Freedom Tower standing tall and proud this year, the city has a scar which will remain there forever.

I was a student when it happened. My father called to tell me about the attacks. I rushed home and sat around the TV with my family watching the unimaginable. I remember my father’s words “the towers won’t fall. They are strong and will survive.” But that wasn’t how it ended, and minutes later we all cried as a new reality set in for the entire world. And in seconds, hundreds of families of the 2,700 innocent victims, as well as the hundreds of thousands that were there that day, joined a new club – victims of terrorism.

Eight months later my family joined that very same club. My father was murdered in a suicide bombing in our hometown of Rishon Letzion, Israel, along with 14 other innocent people.

Terrorism is a cancer that continues to spread around the world. Overnight it seems, the face of terrorism has changed and become darker and more evil. Just a few months ago, the world was focused on sanctions with Iran and the war with Hizbollah and Hammas.  The world put its focus on Tehran and its nuclear program without knowing that a new group would emerge, ready to storm the world with horror videos and quickly spread its ideology and recruit supporters.  All the while the Western world enjoyed summer time.

But the conversation has changed and this new group, ISIS, is much stronger and more violent than we have seen before, and doesn’t discriminate between its victims.  Like a cobra, ISIS surprised us out of nowhere, leaving the world in shock, struggling to find a way to react.  And the social media tools – facebook, twitter, and youtube – that we all love so much, are also being used by these terrorist groups to recruit and push their ideology.

We aren’t doing enough to stop this cancer from spreading. We lack a strong coalition and leadership.  And in the absence of both, global terrorism is becoming stronger and more popular.  We see photos of children holding the ISIS flag, British rappers beheading American journalists, and more and more Westerners turning to radical ideology and joining ISIS.

As fear of ISIS increases, so does the reality of another attack in Europe or on American soil.  We can only wish that September 11th won’t happen again, but we all know that is a far-fetched reality in today’s world.

These who have never faced terrorism will have hard time understanding how cruel its hand is and the scar it leaves. We must hope that our government can act fast and swift and radiate the cancer before it spreads, in order for all of us to live in a better world.

Jacob Kimchy, the Publisher of TLVFaces.com, lost his father, Rami Kimchy Z”L in a suicide attack in Rishon L’Tzion, Israel. Kimchy is the Author of “A NEW SUNRISE” , memoir / motivational guide slated for publication in early 2015. Please visit his book campaign and visit his video

About the Author
Jacob Kimchy, the Publisher of TLVFaces.com, lost his father, Rami Kimchy Z”L in a suicide attack in Rishon L’Tzion, Israel. Kimchy is the Author of “A NEW SUNRISE” , memoir / motivational guide slated for publication in early 2015.
Related Topics
Related Posts
Comments