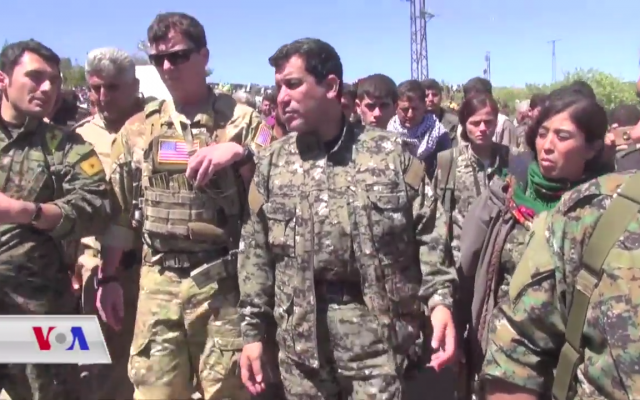 An unidentified US military officer accompanies YPG and YPJ officers visiting a town in the northeastern Hasaka Governorate during the aftermath of Turkish airstrikes in the area. (Wikipedia)

It’s no secret that Israel lives in a bad neighborhood. That neighborhood is about to get a whole lot worse.

On December 19th, Israelis woke up to the news that US President Trump was going to pull American troops out of Iraq and Syria. This announcement came as a surprise not only to Israelis and other US allies, but evidently also to the US military planners and intelligence agencies.

The ones in the know weren’t US allies, but rather a regime not exactly known for being in line with US interests. It seems that during a phone call with Turkish leader Recep Erdogan, the US president suddenly announced that the US would be withdrawing its troops. This was apparently in response to Erdogan’s needling of Trump about the American presence. “OK, it’s all yours,” Trump reportedly said. “We are done,”

America’s rivals in the region, Iran, and Russia, endorsed the move in much the same way as your cat endorses your leaving the birdcage door open.

On the face of it, one might think all this is no big deal; after all, the US maintains only about 2,000 active military personnel in Syria, primarily in areas already under the control of forces friendly to the US.  But it isn’t the number of troops that’s decisive, so much as the willingness to hold the line against Russia and Iran. The US ground forces are a declaration of intent: we maintain our right to have a say in what goes on here. By declaring that the US is “done” with the region, Trump has just relinquished that right.

The response was not long in coming. Turkey has begun a massive military buildup in areas surrounding Manbij, which Turkey has been itching to capture for some time in order to move against the Kurds.

Those same Kurds, it will be recalled, have been the main US ally in the Syrian theater. In fact, to the extent that Trump’s claim of victory over Daesh (Islamic State) is true, it is largely because the Kurdish Syrian Democratic Forces have borne the brunt of the ground assault on the Jihadists. Evidently, now that the Kurdish forces have done their work, they can be sacrificed.

If the US withdrawal was indeed negotiated with Erdogan, the Kurds will soon be in the line of fire. Once they are out of the way (so to speak), the Iranian-Russian-Turkish axis moves in.

And Daesh? Down and out, but not for long. In the power vacuum left by America’s departure, they’ll be free to recover while Turkey, Iran, and Russia figure out how to carve up  the region — and its resources — among themselves.

But the biggest winner is likely to be Iran. Until now, the US backed Kurds have stood firmly in the way of Iran getting heavy weapons and personnel to Hezbollah in Lebanon. That is about to change. The Kurdish forces may have no choice but to shift their allegiance to Assad, who will no doubt be happy enough to see Hezbollah’s control of Lebanon further entrenched.

Meanwhile, Syria has sent reinforcements to Deir el-Zour, near an enclave controlled by Daesh. And who is standing in between? You guessed it: the Kurdish forces, until very recently backed by the US.

The failure to learn from history

If all this sounds eerily familiar, that’s because here in Israel, we recall the 2000 pullout of Israeli troops from Lebanon, leaving our South Lebanese allies in the lurch. It was a bad decision, badly implemented. Pull out troops, fine! But know the consequences and have a plan!

That lesson seems to have been lost on the US president. In fact, Trump had earlier blamed former president Obama for pulling troops out of Iraq, even though that withdrawal was done in a far more orderly fashion.

So far, several US security officials have resigned in protest of Trump’s abrupt decision. Brett McGurk, the US envoy to the coalition fighting Daesh, has joined Defense Secretary Jim Mattis in an exodus of experienced national security officials from the US administration.

So much for the notion that “adults in the room” can control the US president’s excesses.

What will the future hold? Likely more war for those areas that only recently become peaceful enough for people to return. More refugees. More death.

And for Israel, Iranian weapons on our northern borders, as Hezbollah further entrenches its hold over Southern Lebanon. Without the threat of US involvement to balance Russian aid to Iran, Israel will have to make nice to Saudi Arabia to try to balance, almost certainly leading to some very unsavory deals. If we thought we were living in interesting times before….