The Blogs
Edwin Black
Apply for a Blog
Advertisement
Please note that the posts on The Blogs are contributed by third parties. The opinions, facts and any media content in them are presented solely by the authors, and neither The Times of Israel nor its partners assume any responsibility for them. Please contact us in case of abuse. In case of abuse,
Report this post. 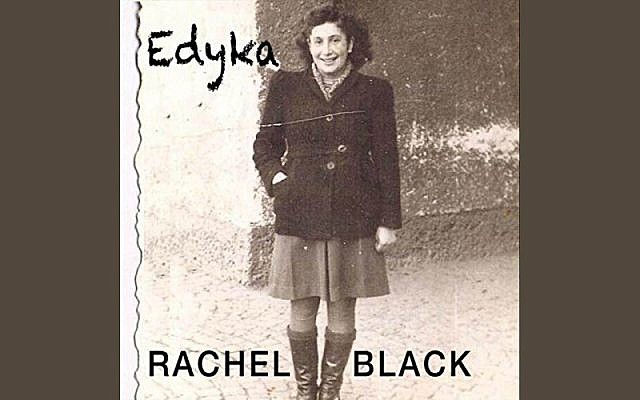 This is deeply personal. But what I have experienced should resonate with the entire Jewish community — the one we know and the one to come. In the whirlwind that seizes me and all who are communally aware, I have reached a new and stunning personal location, wedged between the searing past and the uncertain future.

My story begins before I was born, when my grandmother Fanya seized her slender teenaged daughter — my mother-to-be — Edyka, and pushed her out of the small vent at the top of a suffocating boxcar rumbling inexorably from Bialystok, Poland toward the Treblinka deathcamp. Together, they made the split-second decision that at least one person should escape. My mother became a “jumper.” That day, she jumped into a hostile and dangerous Polish forest, was shot by local forces, and then buried in a hastily-arranged mass grave in the snow. Buried, yet one nearly lifeless limb protruded.

Teenaged Herschel, an audacious forest fighter, came upon the area. Spying Edyka’s leg moving. He pulled her out of the pile. For two years, under cloak of night and by raw courage, they lived in the woods as brave partisans. They survived. After the war, believing millions of Jews had been killed, they decided to continue living as Jews, precisely because so many tried to kill our people. After two years in a displaced persons camp, they found their US home in Chicago. Their courage and determination allowed me to be born.

Growing up, I eagerly inhaled my Jewish heritage and love of Israel. With imbued purpose, I devoted my life to unmasking and addressing the hidden players and hidden hands behind the darkest evils and injustices. I adopted the identity of a Second Generation author long before the larger Second Generation movement developed its own national identity.

Among the disparate generation of unique survivors that came to America, many parsed themselves into two types. One group was determined to boldly keep the memory of Nazi crimes intensely illuminated as a warning beacon to all humanity — that was my family’s group. This group robustly fought for commemoration, investigation, and compensation. They demanded unending X-rays and dissection of the sick international body politic that perpetrated, facilitated, and tolerated the Holocaust. My eye was focused on corporate complicity by those too big to be exposed, such as IBM, Ford, GM, Carnegie, and Rockefeller.

A second group of survivors preferred not to talk about the unspeakable experience except among themselves — the so-called “sha-sha” survivors. Perhaps, while some were proud to survive, somehow they also felt shamed by the degradation they had overcome. Some felt guilty that they lived while their loved ones had perished by gas, gunshot, or other gruesome means. Each had deeply personal reasons for their reticence. But all were protective of their American-born children. Many wanted to shield their sons and daughters from their blood-curdling experiences as a further act of conquest over their anguish. Even so, by this century, many “sha-sha” survivors had found their voices, and sought rooftops to climb and vociferously proclaim their identity. But by now, a new generation had grown up with far fewer nightmares.

During those post-war decades, the “sha-sha” mindset among survivors was accompanied by the nonchalance of comfortable, non-refugee Jews who felt no threat to their safety in fortress America, the land of equality, freedom, and personal protections. Too many saw the bond with Israel to be a cultural encumbrance to their assimilated American existence. Family traditions were eventually replaced with internet communities.

Like many in the corridors of the communally aware, I have been repeatedly shocked by the eruption of open anti-Semitism and anti-Jewish violence in Europe, the mainstreaming of anti-Semitism in the United States, and the eroded position of Israel within certain flanks of the Jewish community. Like many who worry about such matters, my outlook was bleak.

Then two things happened to me.

Last year, my operatically-trained, rock-pop singer/songwriter and cantorial soloist daughter Rachel Black — with no advance notice to me — wrote a haunting Holocaust ballad. It is among the first songs of the Holocaust written in contemporary musical style. I was astonished to learn that it was titled “Edyka,” named for my mother. In piercing rhythms and searing lyrics, “Edyka” retold the story of my grandmother in that ghastly boxcar, saving my mother, which made it possible for me to exist and for my daughter to also exist, thereby keeping the memory alive. When we live beyond our days, it is only because we live in memory. My mother has passed, but her inspiring struggle lives on. I have repeatedly written about my parents’ story, and now my daughter has ignited a new vector of remembrance in song.

Then, Rachel was invited to sing and deliver a keynote address at her state’s official Yom HaShoah commemoration in 2018. At the last minute, she received permission to sneak-preview her song in a solo performance, evoking a rousing, emotional reception. Soon, Rachel performed “Edyka” elsewhere in Kansas, where she lives, now with accompanying musicians, attracting a following who connected with the message. Crowds teared up and stood in applause when she chanted the song’s pulsing injunction to survive. The Kansas City Star learned of the buzz and published an extended Mother’s Day feature about my daughter, her grandmother, her great-grandmother, and the song linking them all. The newspaper also videoed a performance of the song for its website. Quickly, The Kansas City Star’s coverage was syndicated, and then picked up by The Associated Press. Within days, the feature had been published by several dozen American newspapers including The Washington Times and Miami Herald. A few weeks later, Rachel and her group of accompanying musicians found themselves in a recording studio. Shortly after the CD was released, Amazon issued a big order, and it briskly sold as a single. Last October 2018, Rachel flew to Washington, DC, to perform her song at the National Press Club before a prestigious gathering at a Holocaust Legacy ceremony. A few weeks later, she rendered a house-chilling performance at a large commemoration of the 80th anniversary of Kristallnacht held at Temple Israel in Manhattan, sponsored by the Suzanna Cohen Legacy Foundation.

I said two things happened to me. One was my daughter’s song about my mother and my grandmother.

The second was learning that Rachel was pregnant and would be bringing into the world another descendant, made possible by my grandmother and my mother, eternalized in song by my daughter, now giving birth to my granddaughter, as the generation-to-generation slow-motion staccato trumpet ceaselessly blasts. Second Generation, Third Generation, now Fourth Generation.

The new 4G arrival is baby Cora Edyka. Korach gave rise to the original cantors who sang at the Ark of the Covenant. Edyka was in the boxcar. Thus comes Cora Edyka, fit and fighting to take her place in the legacy of survival. I received a video of Cora Edyka’s first moments in the world, as her mother gently sang to her in Hebrew — Hinei Mah Tov. “How good it is… to dwell together.” Hence, the first sounds heard in Cora Edyka’s existence were not Sesame Street cheeps or baby doll squeaks, but the very sounds the Nazis worked so hard to extinguish.

Whether “sha-sha” or fiery activist, the generations of the Holocaust have been determined to fortify and protect the ones to follow. Quite soon, all the survivors will be gone. The Second Generation, including me, will also soon be gone. The Third Generation has the duty to ensure that the Fourth Generation will carry the torch. Sha-sha is no more. It will be the Third and Fourth Generation’s challenge that we “Never Forget,” for ourselves and for the world. This challenge will be immeasurably more difficult in the decades to come than it was for me over the past half-century.

At issue is the question of whether the next generation of Jews will walk furtively looking over their shoulder, or boldly toward a gleaming horizon. I know Rachel and Cora will be among the bold. But they will need plenty of strength and help.

About the Author
Edwin Black is the award-winning, New York Times bestselling investigative author of the international bestseller IBM and the Holocaust and many other books. His 140 award-winning editions are published in 17 languages in 65 countries. Hundreds of his newspaper and magazine articles have appeared in the leading publications of the United States, Europe, and Israel. With more than a million books in print, his work focuses on human rights, genocide and hate, corporate criminality and corruption, governmental misconduct, academic fraud, philanthropic abuse, oil addiction, alternative energy and historical investigation. He is the recipient of the Moral Courage Award, Moral Compass Award, Justice for All Award, and others.
Related Topics
Related Posts
Comments