For those who have not yet voted, and especially those who remain undecided, here are four things to keep in mind. The first three are “herd immunity,” the Great Barrington Declaration, and “mass murder.”

The fourth thing is the most important from our perspective: what Jewish law has to say about the other three.

The first three actually go hand in hand, as will be explained. President Trump is so taken by the false science implicit in herd immunity and the Barrington Declaration that he attacks anyone who disagrees with it. During a campaign call the day after Dr. Anthony Fauci appeared on the CBS News program “60 Minutes” on October 18, Trump said, “this guy is a disaster,” adding, “People are tired of hearing Fauci and all these idiots.”

On the other hand, Trump is so blinded by the false science that he is oblivious to what even a real idiot should be able to see.

Last Friday and Saturday, the United States set a new record, nearly 84,000 new cases of covid-19 reported each day, far surpassing the previous record of 77,363 cases that was reached on July 16. In addition, there were more than 1,800 deaths attributed to covid-19 over the two days, pushing the death toll over 225,000.

By last Friday, as well, the country’s seven-day average of new daily cases exceeded 63,000, which represented an 84 percent increase since cases began to rise again in mid-September.

Virtually every health professional and infectious disease expert says the worst is yet to come. As Megan Ranney, an emergency-medicine physician at Brown University, told the Business Insider website, “I think that the number of deaths that we’re going to experience this fall and winter is going to dwarf what we’ve already been through.”

Fauci, the director of the American National Institute of Allergy and Infectious Diseases and leading member of the White House Coronavirus Task Force, was interviewed by the BBC on Friday as the July of covid-19 record was being shattered. The United States, he said, is “actually going in the wrong direction.” The data, he said, “speak for themselves.”

That data, according to Michael Osterholm, director of the Center for Infectious Disease Research and Policy at the University of Minnesota, shows that “the deaths are going to go up precipitously in the next three to four weeks.”

The death toll is likely to keep going up even after the next few weeks. A study by researchers at the University of Washington’s Institute for Health Metrics and Evaluation, coincidentally published last Friday in the journal Nature Medicine, projects that the death toll may exceed 500,000 by February, with the potential for being double that by then, meaning more than a million deaths by February, if mask-wearing and social distancing regulations are relaxed.

Yet despite all the evidence to the contrary, including an outbreak of of covid-19 cases in and around the White House (including as of this writing four members of Vice President Mike Pence’s staff), during his second debate with former Vice President Joe Biden Trump said of the threat of covid-19 poses, “It’s going away.” On Saturday, he doubled down on that during a rally in North Carolina. The country, he said, is “rounding the turn, our numbers are incredible.”

The numbers are incredible—but only for what it says about Trump and his handling of the pandemic.

That brings us to herd immunity and the Great Barrington Declaration. According to Scott Atlas, the most controversial member of the White House Coronavirus Task Force and the one most trusted by Trump—he is a neuroradiologist, with no experience in epidemiology—the Barrington Declaration “matches the policy of the president.”

The Great Barrington Declaration is so-called because it was drafted at the American Institute for Economic Research in Great Barrington, Mass., in early October. In the past, the AIER has published studies supporting the benefits of sweatshops to the economy and minimizing the risks posed by climate change.

The one-page declaration proposes what it calls a “Focused Protection” approach to battling the pandemic. “As immunity builds in the population, the risk of infection to all—including the vulnerable—falls,” the declaration states. “We know that all populations will eventually reach herd immunity—i.e., the point at which the rate of new infections is stable.”

“The most compassionate approach,” it says, “balances the risks and benefits of reaching herd immunity,” which “is to allow those who are at minimal risk of death to live their lives normally to build up immunity to the virus through natural infection, while better protecting those who are at highest risk.”

Put another way, and with total disregard for the long-term consequences of of covid-19 to the health of people who have survived it, it is “most compassionate” to let as many people as possible contract the disease.

According to the Mayo Clinic, of covid-19 has been shown to cause “lasting damage to the heart muscle, even in people who experienced only mild of covid-19 symptoms.” Long-term damage is being noted also in the lungs and the brain. “Even in young people,” the Mayo Clinic says, “of covid-19 can cause strokes, seizures” and other conditions, and “may also increase the risk of developing Parkinson’s disease and Alzheimer’s disease.”

Also, it says, “of covid-19 can make blood cells more likely to clump up and form clots,” and, it warns, “many long-term of covid-19 effects [are] still unknown.”

The declaration advocates fully opening schools and universities for in-person teaching, despite the fact that there have been more than 214,000 cases reported in universities alone since last February, including 85 deaths. It also advocates fully reopening restaurants and other businesses, as well as all cultural activities.

As for people who are in high-risk categories, they are free to go back out into the world “if they wish, while society as a whole enjoys the protection conferred upon the vulnerable by those who have built up herd immunity.”

Fauci calls the declaration nonsense. “This idea that we have the power to protect the vulnerable is total nonsense, because history has shown that that’s not the case,” he said. “And if you talk to anybody who has any experience in epidemiology and infectious diseases, they will tell you that that is risky, and you’ll wind up with many more infections of vulnerable people, which will lead to hospitalizations and deaths. So I think that we just got to look that square in the eye and say it’s nonsense.”

William Haseltine, who founded Harvard University’s cancer and HIV/AIDS research departments, was more direct in his assessment. As he told CNN, “Herd immunity is another word for mass murder. If you allow this virus to spread…, we are looking at 2 to 6 million Americans dead. Not just this year, but every year.”

Mask-wearing especially has been associated with reduced risk of infections. One study, published in the journal Health Affairs, for example, showed that “states mandating the use of face masks in public had a greater decline in daily of covid-19 growth rates after issuing these mandates compared with states that did not issue mandates.” Another study, published in Nature Medicine, says that “universal mask use” could save nearly 125,000 lives through the end of February, while about 96,000 lives would be saved if only 85 percent of people wear masks.

As the Talmud says elsewhere (see Sanhedrin 59a), we are meant to “live by God’s laws, not die by them.” That includes doing anything we can do to save a life because we “must not stand idly by” when another person’s life is in danger. (See Leviticus 19:16.)

In a taped message two weeks ago, Rabbi Baruch Meir Yaakov Shochet, the leader of the Karlin-Stolin chasidic sect, who recovered from of covid-19, minced no words in his defense of mask-wearing and social distancing. People who refuse to follow the rules, he said, showed “contempt for the lives of others.

“For God’s sake,” he said, “we cannot bend any of the rules, under any circumstances. This is not child’s play, it’s life and death and the essence of Jewish law.

“Can it be,” he wondered, “that some [people] have forgotten the simple laws of pikuach nefesh, which is the basis of Judaism…? [We] must do it. This is the will of God and we should be happy for the opportunity we’ve been given to protect human life.”

The notion of “herd immunity” as proposed by the Great Barrington Declaration and as supported by President Trump and his non-expert Scott Atlas will lead to many more deaths if it becomes U.S. policy—and it will become policy if Trump is re-elected. Voters who cast their ballots for Trump or who refrain from voting for either Trump or Biden, therefore, are complicit in causing those deaths. They are violating the Torah’s command not to “stand idly by” when someone’s life is in danger.

As the Karlin-Stolin rebbe said about following the COVID-19 rules, so it is here. This is about “life and death and the essence of Jewish law.” 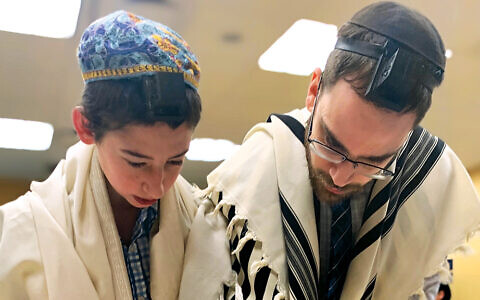 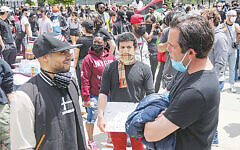 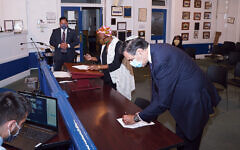 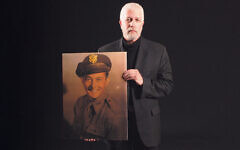 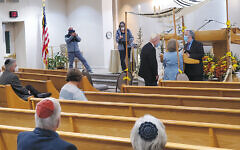 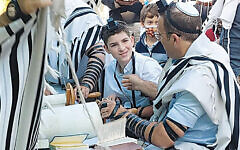