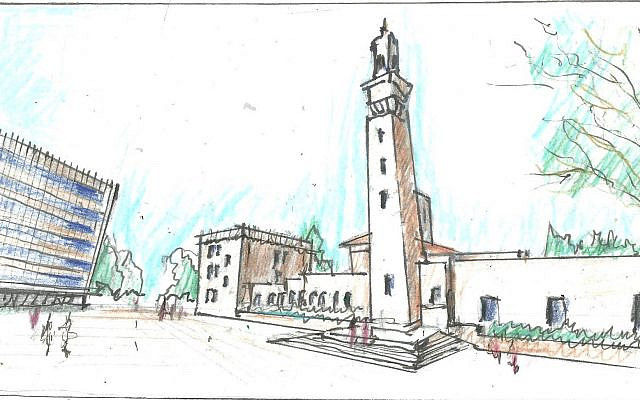 Bringing life to the Ministry of Education’s headquarters in Jerusalem.

Proposed here is transforming the enormous, alienating and depressing space, between the Ministry of Education’s headquarters building – Lev Ram and the historic Italian Hospital opposite it to the east, some three dunams in area, into a lively urban space serving the Ministry’s hundreds of workers and visitors as well as municipal and national conventions.

Originally constructed as a Haredi Hotel that went bankrupt in the late eighties, the large curved building called Lev-Ram, an extremely poor imitation of the UNESCO building in Paris, was then leased to the Ministry of Education becoming its central offices. Recently sold to a group of investors, assumed is that the Ministry of Education will continue to occupy it. The Italian Hospital, built in the early nineteen hundreds with its marvelous stone tower and Florentine renaissance facade, was purchased by the Israeli government in 1963 to serve part of the Ministry’s offices, is often referred to as one of the most beautiful buildings in Jerusalem.

A café, shaded seating and a garden will be included along with warm-colored paving and sensitive greening. Flexibility of use must be built in. Lev Ram’s sole pedestrian entrance today is from Haneviim Street. Enabling maximum pedestrian access is all-important, the closed entrances of the Italian Hospital reopened, an additional entrance created from Rabbi Mendel Bricta Street.

The Ministry’s extremely large and ice cold main building can yet be made human by varying its over-repetitive façade, improving its signing and greening its plaza level.

Hard to believe is that this obvious opportunity with its enormous potential was ignored for decades.