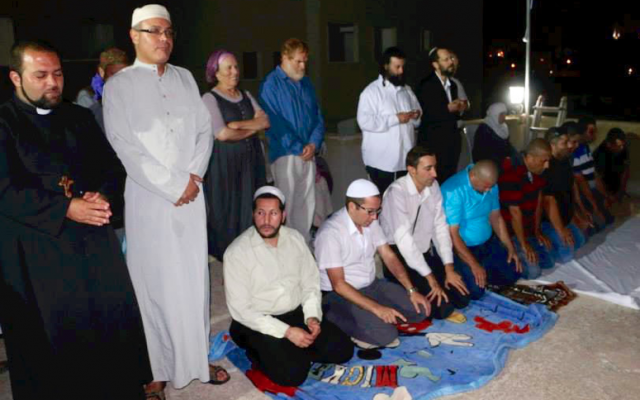 For many years, I’ve met with rabbis and sheikhs to discuss together the relationship between Islam and Judaism, based on our belief that God wishes to foster peace and fellowship among believers in Him. One day, we decided to consider the most charged topic of all: the Temple Mount.

The situation on the Temple Mount is extremely sensitive, and in response to Arab threats and riots, the Israeli government has forbidden Jews to pray there. Visibly religious Jews who enter the Mount must be accompanied both by police and by representatives of the Waqf, who ensure that Jews do not pray anywhere on the Temple Mount. When I go to the Temple Mount, I try to make the best of this difficult situation. Since prayer often becomes a chiefly outward process, I try to see my visit as an opportunity or challenge to focus on the inner experience of prayer.

The gap between the Muslim and the Jewish attitudes toward the Temple Mount is all but impossible to bridge, or even to discuss productively. Judaism regards the Mount as the site of the Temple, the holiest place in the world. The Torah frequently mentions “the place God chose,” and its sanctity extends throughout time: it was holy when the Temple was standing, it remains holy today, and its holiness will endure  forever. It is forbidden for Jews to enter the Temple Mount without rigorous spiritual preparation, including immersion in a mikveh, and certain areas of the Mount are forbidden altogether, until messianic times. Moreover, the Temple is at the heart of Jewish aspirations, and Jews the world over have prayed in the direction of the Temple for thousands of years.

In contrast, Muslims generally disregard the Jewish people’s ties to the Temple Mount. In the most extreme cases, they deny the historical existence of the Temple there. But even more moderate Muslims, who do not reject the historical record and the archaeological evidence, say that today, Jews no longer have any pertinent connection to the Mount, even if there might have been a Temple there in the past. Muslims see the Temple Mount as a holy site within Islam, drawing on the description of Muhammad’s ascent to heaven, in the Koran:

It is commonly accepted within Islam that al-Aqsa is the mosque that is farthest from Mecca, and is on the Temple Mount. From there, Muslims believe, Muhammad ascended to Heaven and it is for this reason that every year millions of Muslims visit the large mosques on the Temple Mount. For their part, many Jews claim that Islam has no historical tie to the Temple Mount. The Koran never mentions “Jerusalem,” and the description above does not indicate that “al-Aqsa” necessarily represents a place in the land of Israel.

I believe that, despite the conflict, the Mount must become a center that emphasizes our commonality. The 19th-century Italian kabbalist Elijah Benamozegh explained the verse that ends the section of the Prophets in the Bible — “He shall turn the heart of the fathers to the children and the heart of the children to their fathers” (Malachi 3:24) — as a metaphor for reunification between Judaism and its daughter religions, Christianity and Islam. What site could be more fitting for this wished-for reunification than the Temple Mount and the al-Aqsa mosque?

Unfortunately, as we have seen, interfaith dialogue on this issue of the Temple Mount seems doomed to failure. Tension was high when we chose it as the topic of that meeting.

“From a Distant Land”: al-Aqsa

Despite the tension during the meeting, there was a moving moment when one of the rabbis read King Solomon’s prayer that links Israel and the nations specifically at the site of the Temple:

Moreover, concerning the stranger who is not of Your people Israel, when he shall come from a distant land for Your name’s sake – for they shall hear of Your great name and of Your mighty hand, and of Your outstretched arm – when he shall come and pray toward this house, hear You in heaven in Your dwelling-place, and do according to all that the stranger call to You, that all the peoples of the earth may know Your name, to fear You as do Your people Israel, and that they may know that Your name is called upon this house that I have built. (I Kings 8:41–43)

The rabbi highlighted the message of this prayer that the Temple is meant to be not only for the Jewish people, but for humanity as a whole, including the faraway nations.

Immediately, one of the sheikhs stood up to talk, emotionally affected by the wording of the biblical text. He explained that story of Muhammad’s journey could be seen as a response to this call of Solomon. As we saw in Sura 17 above, “al-Aqsa Mosque” literally means, “the distant house of prayer.” The sheikh asserted that Muhammad went to the site of the Jews’ distant house of prayer, and thereby fulfilled Solomon’s prayer that God would answer when the nations of the world would come from a distant land to pray toward the Temple.

The sheikh’s interpretation was more than a pleasant homily; it was rooted in a fundamental approach toward understanding the Koran: that many parts of the Koran are a response to biblical stories and to ancient rabbinic teachings. The idea that Muhammad traveled specifically to Jerusalem, to the “distant house of prayer,” connects Solomon’s prayer in the Bible to the Islamic belief that Muhammad came to the Temple Mount to pray.

Indeed, there is historical support for the idea that initially the Muslims’ identification of al-Aqsa with the Temple Mount was based on the fact that it had been the site of the Jewish Temple. Coins have been discovered that were minted by the Umayyad Caliphate in the seventh and eighth centuries, featuring the image of the Candelabrum from the Temple. Apparently, there were periods when Islam did not view the holiness of the Temple Mount for Jews as contradicting the Muslim ties to the Mount. I dare to hope that one day this locus of dispute will become a locus of world peace, and that together our two faiths will find our way to God, in whom we share a common belief.

This interpretation has the potential to turn the whole controversy on its head. We need not see two world views colliding due to historical accident or a frustrating set of coincidences. On the contrary, we can understand that the Islamic tradition originally derives the sanctity of the Mount for them and for other nations from Judaism’s belief in the sanctity of the spot for everyone. Solomon expressed this belief in his prayer that the site of the Temple would serve as a vehicle for all nations, everywhere, to draw near to God, who chose the Mount as the location of the Temple.

The lessons brought up by the rabbi and the sheikh indicate that beneath the conflict, there is actually a point of commonality at the core of the religions: to fulfill Solomon’s hope and yearning about the Temple.

There are still profound differences between the Jewish and Muslim approach to the meaning and role of the Temple Mount\al-Aqsa. An understanding that the presence and prayers of the others enhance the sanctity of the site, rather than detract from it, can lead to breakthroughs in bridging these differences – or at least creating a new status quo preferable to the current one for both sides.

About the Author
Yakov Nagen is the Director of Ohr Torah Stone's Blickle Institute for Interfaith Dialogue and the Beit Midrash for Judaism and Humanity. He is also a Rabbi at the Yeshiva of Otniel. His book "Be, Become, Bless - Jewish Spirituality between East and West" was recently published by Maggid.
Related Topics
Related Posts
Yakov Nagen