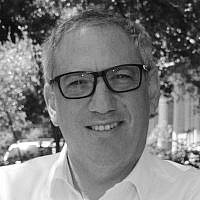 The Blogs
Brian J. Horowitz
Apply for a Blog
Advertisement
Please note that the posts on The Blogs are contributed by third parties. The opinions, facts and any media content in them are presented solely by the authors, and neither The Times of Israel nor its partners assume any responsibility for them. Please contact us in case of abuse. In case of abuse,
Report this post.

I made my first of many trips to Russia as a student in the early 1980s. It was Brezhnev-time. People primed me: “It’s always grey there.” It was actually rather green; St. Petersburg in the summer had a bright feel, leafy green parks, people strolling arm in arm. The dress was 1950s, men in suits, women in skirts and heels. People wore the best they had and they looked more than respectable.

But there was a Soviet feel. You didn’t talk about certain subjects, you watched for informers, you realized that you, an American, had a passport and a flight home, but your friends–they bore all the risks.

Worse of all, you could feel that everyone knew what was going on in politics and economics, but no one could say it aloud, except around the kitchen table (Revolutions occur out of kitchens, but revolt germinates slowly like a stew). Soviet newspapers were full of innocuous and silly stories or sharp anti-American propaganda. People used Aesopian language even in daily life. If someone needed a tire fixed and wanted to talk about it, they would say, “I would have had to wait two weeks to get it fixed.” Meaning: I paid a bribe and now it’s ready.

There was fear, but mostly irritation at corruption, privileges that some had over others, the need to pay bribes or cultivate certain people. It was a way of life and people questioned it–all the time–but the feeling of hopelessness fought to repress deeper despair. No one spoke to me about Poland, or Afghanistan. One didn’t need to speak, we all knew where one stood.

Putin’s Russia revived a good deal of repression, but until recently, the repression belonged to the Brezhnev sort. Just keep quiet and you will manage to navigate your personal boat to port. But things have heated up with the war, there is greater surveillance and suspicion. The old apparatus has acquired a new attitude of zero tolerance for the enemy within. Fear is growing.

As far as anyone can predict, this new/old Russia will continue and a pervasive repressive state will reemerge and take hold. This is a change, a hardening of positions and clarification of ideological lines. I have a friend who maintains that this internal surveillance constitutes the actual purpose of the war.

During the summer of 1982, I went from apartment to apartment in quest of friends, food, and drink. That kind of adolescent summer wouldn’t be possible today.

About the Author
Brian Horowitz, grew up in Roslyn, NY. He attended New York University (B.A.) and University of California, Berkeley (M. A., PhD.), where he studied Slavic Languages. He holds the Sizeler Family Chair and is professor of Jewish Studies at Tulane University. He is the recipient of many major awards including Yad Hanadiv, Lady Davis, Alexander Von Humboldt, and Fulbright. He is the author of six books that include, Vladimir Jabotinsky’s Russian Years (2020); Russian Idea-Jewish Presence (2013); Empire Jews (2009) and Jewish Philanthropy and Enlightenment in Late-Tsarist Russia (2009).
Related Topics
Related Posts
Comments