“At the end, Secretary Kerry completely impromptu said: ’when I was 22 I went to war. I went to war and it became clear to me that I never wanted to go to war again’. That’s what this was all about. Trying to settle these matters through diplomacy and peaceful means, and it was such a moving moment that everybody in that small room applauded including Iranian delegation, everyone had tears in their eyes….”  Wendy Sherman, 7/19/2015

“…despite a deal with world powers…  Ayatollah Ali Khamenei, the highest authority in Iran, told supporters on Saturday that U.S. policies in the region were “180 degrees” opposed to Iran’s, in a Tehran speech punctuated by chants of “Death to America” and “Death to Israel”.” Reuters, 7/21/2015

In the last two weeks we had the opportunity to read and hear a lot from the U.S. officials that negotiated the deal with Iran. The first quote from Wendy Sherman, the chief U.S. negotiator, tells us what this was all about. It was not about preventing Iran from having nuclear weapons, but rather about “settling these matters” with Iran. And once this was achieved, the room broke in tears with Kerry’s remarks. How moving! 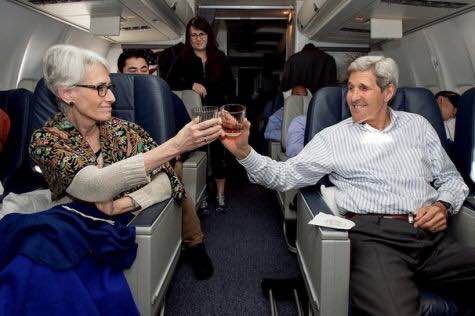 It strikes me that reaching a settlement and making the room cry, including the Iranians, is a sign that the winds of change are blowing over Iran. I am wondering if Khamenei also broke in tears with Kerry’s remarks? I don’t think so. In fact, the press widely reported Khamenei’s remarks and the chants “Death to America” right after the signing of the deal. Should these be brushed off? Are the tears in that room more significant that Khamenei’s words and the “Death to America” chants?

The basic problem that the U.S. negotiators have, is twofold: a) they are dealing with a rogue regime as if they were negotiating a deal with any normal country and b) they are negotiating with someone who two, three, four years from now will no longer be in power.

Let’s address the first issue, and for this purpose, let me quote Secretary Kerry, on July 19, 2015: “In arms control, there is no country anywhere on this planet that has anytime, anywhere. There is no such standard within arms control inspections.” This statement shows the U.S. basic flaw in this negotiation: it is treating Iran as “any country” and negotiations with them should be driven by a certain “standard.” Not as a country that is the world’s foremost supporter of terrorism, not as country that is the foremost violator of human rights, not as the country that is actively involved in either supporting dictatorial regimes or the overthrowing governments that it dislikes. Iran is just “any country.” Negotiations with them, according to Obama’s team, should follow some accepted standards.

No, this should not have been about settling a dispute with Iran. As a departing point for this negotiation, the United States should have recognized that we are not dealing with “any country”. Looking at Germany and Japan after WWII, and how the victorious countries were absolutely in control anywhere, anytime, we should have stood firm in demanding the strictest possible inspections regimen for prevention so that, after having learned the lessons of history, we don’t have to apply a strict controlling regimen after the fact.

As for the second issue, we need to remember that the country is fundamentally ruled by the Ayatollahs, and Rouhani is simply the “officer in duty” at the moment.

It reminds me of what a state-owned bank director once told me when I was living and doing business back in Brazil: when asking him why he was not complying with an instruction given by a Minister in charge of his bank, he simply responded “ministers come and go, I am the one that stays here all the time, so if you want to talk about that instruction, you need to negotiate with me.” That’s really the case with Iran, where the real rulers are the Ayatollahs, while the presidents come and go. And so, why are we placing more weight on a piece of paper that can be torn at any time and that already has holes where “you can drive a truck through” – in the words of Ret. Admiral James Stavridis, former NATO Supreme Allied Commander and current Dean of Law and Diplomacy at Tufts University. Why are the words of the Ayatollah Khamenei completely disregarded and not given the appropriate weight? Why are the continuing nefarious actions of Iran totally disregarded?

Are we playing a game of “wishful thinking”? Is this a game of “make believe”?

I hope that our Members of Congress will not succumb to our President’s pressure, and that their reasoning, conscience and moral compass will dictate their vote when time comes, so that this bad deal does not move forward.